Homebrew Is it possible to make the console temporarily pretend it's not the same account? (Pokémon OR/AS) 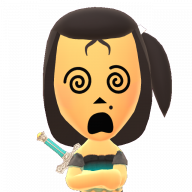 Hi!
So in Pokémon OR/AS, it's possible to open and claim a secret base spot, decorate it, then share it using a generated qr code of it, streetpass, or online interaction.
But you can't flash your own qr code if you only have one console, even if you erase your save file and start a new one, or if you have several games. Maybe it's linked to the friend code (or something more hidden like the id0 but I doubt it).
So is there a way to make your modded console temporarily have a different identity, so that you can effectively flash these codes?

or a software to read the qr code, edit its infos and generate a new qr code that says something else that makes the flashing possible, but I don't think that existed, I've searched for that years ago...
Solution
https://douevenknow.us/post/144472728768/decrypting-oras-qr-codes
https://projectpokemon.org/home/forums/topic/33587-oras-editing-secret-bases/

referencing to this, Im not sure if there are any update on the decrypting the QR code since it was few years ago.
Sort by date Sort by votes

I'm not sure I understand the meaning of "dumping" in this context, but I assume it means to translate the informations into something you can read?
Upvote 0 Downvote

referencing to this, Im not sure if there are any update on the decrypting the QR code since it was few years ago.
Upvote 0 Downvote
Solution

thank you so much!
Upvote 0 Downvote

I tried to find a way to convert that qr code into a sb6 file (and didn't find anything interesting on internet through all my struggles), so first I tried to make a decoder read the qr code I want, it gave me this
https://cdn.discordapp.com/attachments/765932656655335465/846207216599826502/unknown.png
So I searched for a byte text editor to read one sb6 file for a dumb secret base, and I got that
https://cdn.discordapp.com/attachments/765932656655335465/846207654098894888/unknown.png
so I just thought I could use a .txt editor, paste my qr code decoding, then change the extension of the file. But when I tried to inject that in pkhex it just doesn't do anything, so I guess the file isn't encoded correctly (or maybe the qr code reader didn't get it right), and I don't have the knowledge in that kind of business to understand how exactly I can fix that. So right now I'm in a dead end.
I bet it's something stupid, very easy for some of you, I just don't have the tools...
Upvote 0 Downvote