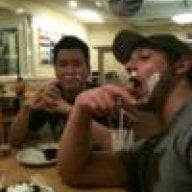 I checked ShopTemp for a reseller that sold Acekard 2i flashcarts. I had my friend buy one from V2watch.com. He had problems installnig AKAIO 1.8.9z, but 1.8.9 worked. Everything was fine until he clocked in 55 hours in Pokemon Soul Silver after about 3 weeks. It started freezing every few minutes randomly during battle or during wifi. These were not freezes caused by events. We tried using different versions of AKAIO. We tried 1.6 RC1, 1.6 RC2, and 1.5.1. All of them black-screened. 1.8.8 works. We couldn't find 1.4.1 to see if it would trigger an "unsupported device" error.

We compared his Acekard 2i to images of both fake and real Acekard 2i's. His matched the fake ones, not to mention it receiving a "Sorry, the Anti-Counterfeit code is not exsit! You bought a FAKE Acekard!" message from Acekard's AntiClone. I checked Acekard's reseller list on their web site, and most of them are overpriced at about $32, or their businesses have been shut down. HolidayCarts.com has absolutely no reviews but claims theirs come with an anti-clone sticker, which doesn't really matter considering our anti-clone sticker was fake anyway. zhuzhuchina seems legitimate from the sticky here, but it's not on ShopTemp's list or Acekard's list of resellers. I obviously not willing to try another one of ShopTemp's resellers despite the reviews considering what's already happened.

My questions are: Is there a way to fix this freezing? I read on another forum that Pokemon HG/SS start freezing after high time played, but that was only one source. Everybody else claims they can run Pokemon fine on their Acekard 2i's. It basically freezes, but the music keeps going on. If I can't do that, then where can I buy a real Acekard 2i for about $15? I trust personal responses and reviews here more than those on ShopTemp that aren't directed at anybody in particular, considering those reviews were all wrong. At this point, I'm looking at buying from HolidayCarts.com or zhuzhuchina while trying to figure out how v2watch.com handles refunds and replacements. Also, I'm curious as to what these Acekard 2i clones are actually clones of. I heard they're R4 clones labelled as Acekard 2i's.

you wont be able to fix unless you get a new card as that is the problem
Reactions: 1 person

you must always use clean roms tho, never patched with AKAIO
Reactions: 1 person

Hmm...ShopTemp has 39 shops listed here, but after clicking Acekard 2i, it only lists 8 shops as shown here, none of which are zhuzhuchina. Somebody should fix that.

Zhuzhuchina is great. I received my order in a little over a week, and the AK2i was legit and worked perfectly. I did the anti counterfeit check and it was in fact the real deal, the whole order cost me only $14 and I have not had an issue with the card (aside from my friend accidentally updating his 3DS so now I need to hack it again to make it play)

I have another Zhuzhu order arriving shortly, I assume some time in the middle of next week and I can't wait! I was not charged any conversion fees either and the process has been so smooth. I made a great choice ordering from them.

Did your "friend" use Panasonic SD Formatter v3.1 to do a format? The problems your describing are usually caused by not formatting correctly, or fragmentation. I believe, in your case, to be due to fragmentation. You did try multiple kernels, and I'm betting you weren't doing formats after each change. Sorry to hear about videogameplaza sending you a counterfeit card, I don't trust them anymore myself. It's a long story but I found them to be deceitful. Your story, if true/accurate, proves that. But yeah, use the formatter, and try to reinstall 1.8.9z and make sure you get the new loaders on acekard.com's download area also. Put your other files back when this has been finished and pray that the problems are gone.

Pong20302000 said:
Fake Killer was used in AKAIO and DSTT
the DSTT one has been removed for ages but the AKAIO one is still there so it cannot be used on fakes
Click to expand...

What? This is the first I've heard of this for the Acekard (the DSTT one is well-known).