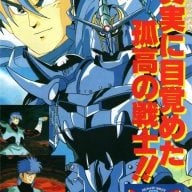 After two days of trial and error, searching google, gbatemp and other usefull ressource websites in order to translate this app, I finally did it.

To do:
Unlocked areas
Items
Weapons
Fix the "Memorable Battles" tab which is kind of messed up, I'll do that by trying some and then I'll see exactly what I'm editing

There is some stuff I'd have to correct (too large= messy screen, or just random translations as I didn't find out what it meant for exemple)
->This will be done after the main stuff is finished translating. I found a way to move around the text and boxes

Of course it's not perfect, but hey, much better than full japanese ^^

Thanks for the translation

here is the DQMJ2 cheat.exe list of skillsets in this order :

From Dragon's Den, you can find them all :
http://www.woodus.co...s/skillsets.php

I'm currently doing as for the monster list, searching for a japanese wiki, except this time it won't be in "library" order list (like for monsters) so it'll be harder to figure this out :-(

Here's the wiki I used for monsters, problem is they don't have all 244 skillsets (WTF ?)

If you could give me the same list as the one in spoiler (which is the one used by the dqmj2cheat.exe) I could input it back in full english in no time, as I'm in a hurry now (going to vote for local elections in France right today) and it's boring ahah

THANKS in advance my friend !
B

Wow! This is an impressive start. I hope you do more, but what you have already done is VERY useful.

If you get bored, perhaps you could convert the DRAGON QUEST MONSTERS-Joker2 PROFESSIONAL SaveData Editor (dqmj2p_cheat.exe) also?

Here the file with the skills only, I have a Trait Library list in spanish, also I have some translated lists of DQMJ2 PROFESSIONAL

jm_plata said:
Here the file with the skills only, I have a Trait Library list in spanish, also I have some translated lists of DQMJ2 PROFESSIONAL

I'm still working on Skillsets, and it's quite hard, I still have to search for a full skillsets list in japanese (in the default ingame library order !), for now, I'm doing what I can, but I miss about 30-40% of the skillsets (it was such a PAIN IN THE ASS lol)

I'll look into your list, I had some Spanish lessons when I was younger, hope it will help ahah

OMG it seems you have ALL the skillsets Japanese / English allready translated, man, I love you !!!!

The different "something" - ward and the unique monster skillsets (like the Incarni aces, and the S/X rank monsters unique skillsets) were driving me crazy ahah

I'll update the DQMJ2cheat.exe right now, it'll allow us to modify the skillsets easily now, thanks to you ;-)

I think I'll have to need your help for Traits / Skills that is left to translate maybe But now that we have all monsters (already, that was not too hard but time-consuming) and all skillsets we'll be able to make good wifi teams
J

jm_plata said:
Today I made this Trait List by ID.

To show my gratitude (is that even an english word ? lol), I added you to the about box!
I edited a bunch of bad translations too, now I'm able to push to the left or right the texts and buttons, it'll be much better I'll do the traits library next, it should be fast ^^

I'll need your help for one last thing, (or two), some bunch of text in the General tab (I know there are the locations for each area, and the Scouting guide (1 to 43) but the rest is mystery), and for the Memorable battles tab, some things are awkward: win/lose/scout/victory/comp rate monster ? etc

Thanks again my friend


EDIT:
The "Memorable battles" screen is messed up, I'm on a MacBook, on Windows side of the machine, and I don't have a "Print Screen" key, so I use the Screen Capture software, and that was what messed up the screen

BurlyEd said:
Wow! This is an impressive start. I hope you do more, but what you have already done is VERY useful.

If you get bored, perhaps you could convert the DRAGON QUEST MONSTERS-Joker2 PROFESSIONAL SaveData Editor (dqmj2p_cheat.exe) also?

Hi sorry didn't see your posts, I thought there was only jm_plata reading my thread lol

But yeah, this is in my books, I'll surely do DQMJ2 PRO as well, using the already known names (aka the same as in DQMJ2) and for the 100 new monsters (surely skillsets as well) I'll use the Souimet translation names he used in his translation patch.

Glad you enjoy this, I found this utility completely by random in a thread in GameFaqs lol (in the Action Replay codes) and thought, "Hey, why be in a hassle to use AR codes when you can just custom cookie cutter make a team using this save editor "

And here I am, after a lot of trouble to translate all this japanese ahah

Sorry to triple post, but here is an update:

Finished all of the General Tab, except the Unlocked Areas (Treepidation, Doutback etc)

I'll finish that (though I'll have to move around the items to fit them all inside) and then I'll have to fix the Memorable Battles after that. 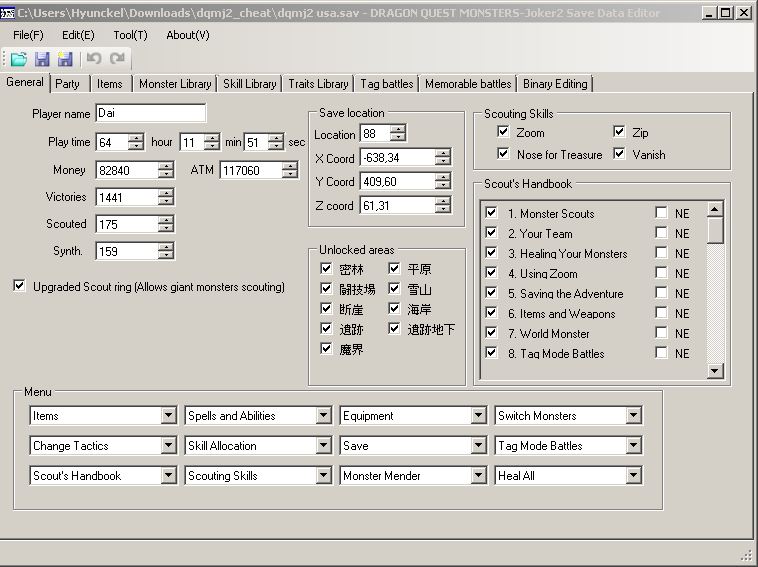 Hey =) and thanks for the credits

jm_plata said:
Hey =) and thanks for the credits

Hello there
Thanks for the locations and other translations

The hardest will be the Memorable Battles screen, as I can't figure what is what exactly (and google translation is shitty as always). If you can decipher japanese, or know what is what (I never did any tag battle) then that would be usefull

here is the original screen I'm talking about: 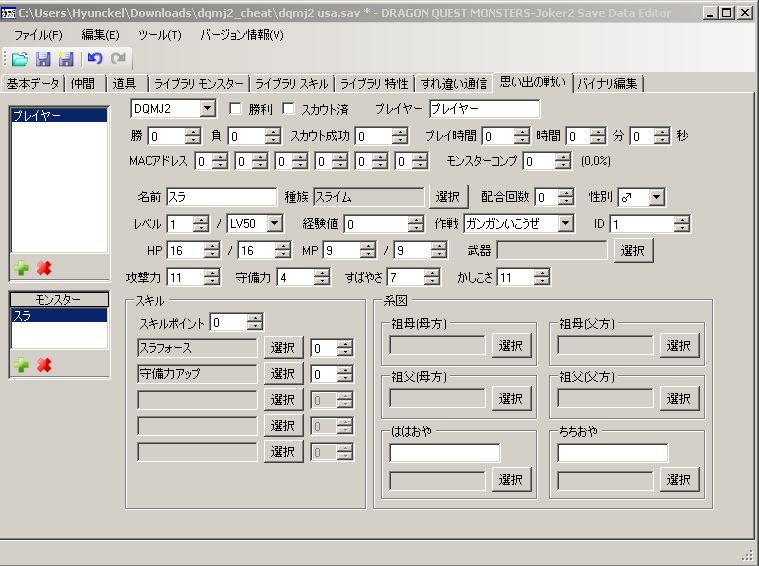 And how baddly I translated it 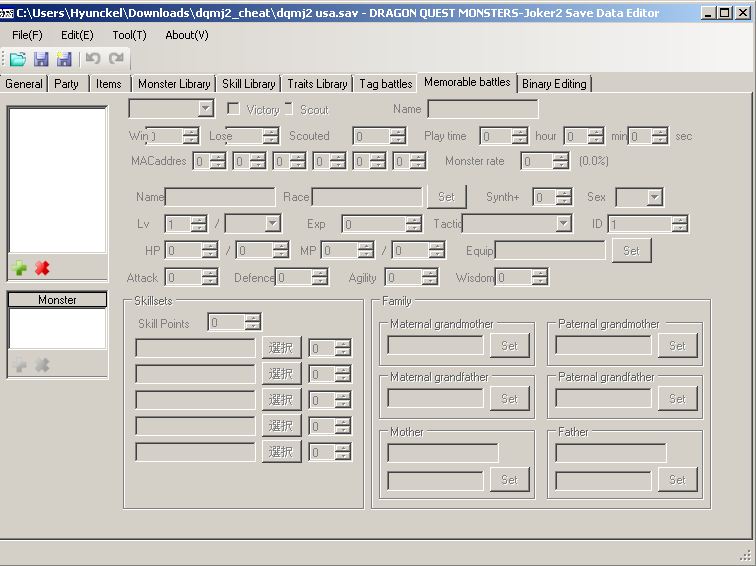 Of course some thing are overlapping on the check boxes and all, but now that I know how to move all of this stuff around, I can fit larger sentences easily

I'm gonna raid tonight with my guild before they kick me out of it, as it has been a week I didn't do any activity ingame (wow) so I think I'm gonna take it easy for now with the DQMJ2_Cheat.exe

Hopefully with all of this done, it will be enough for now ahah

Memorable Batttles is for fight with monsters of connections with other games (DQIX-DQVI), events or friends (others DQMJ2) who previously you transferred, and these monsters can be scout, so your translation is correct. 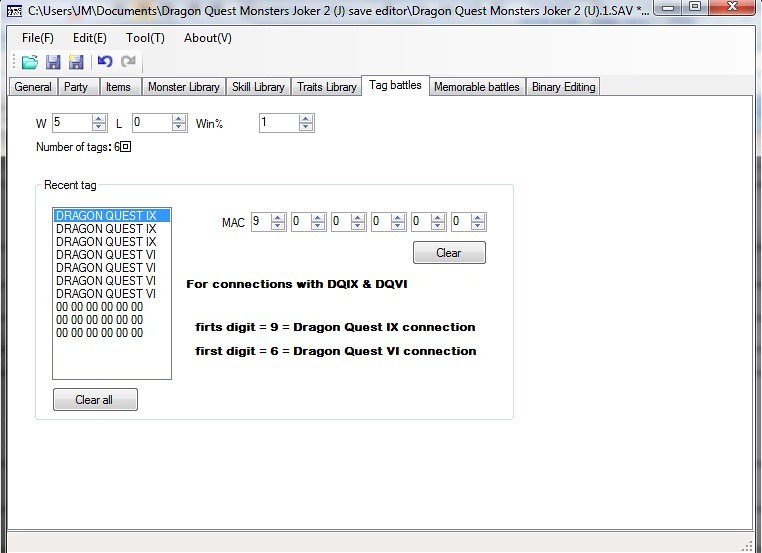 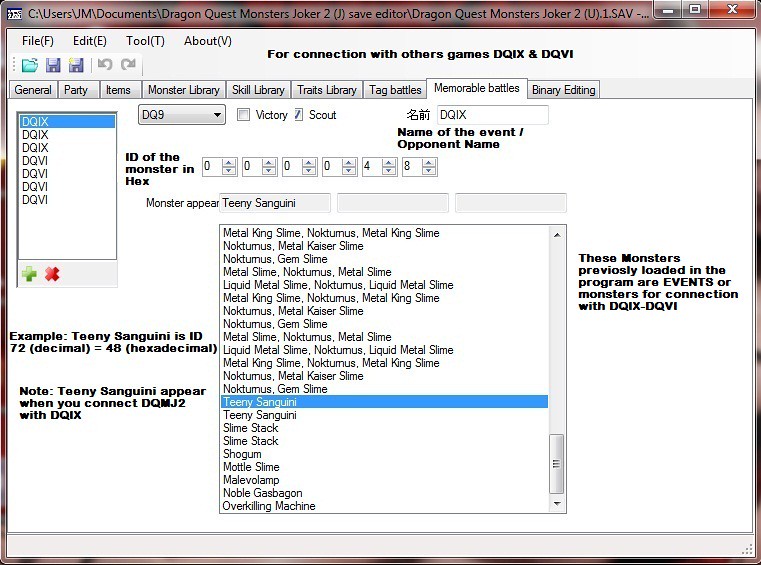 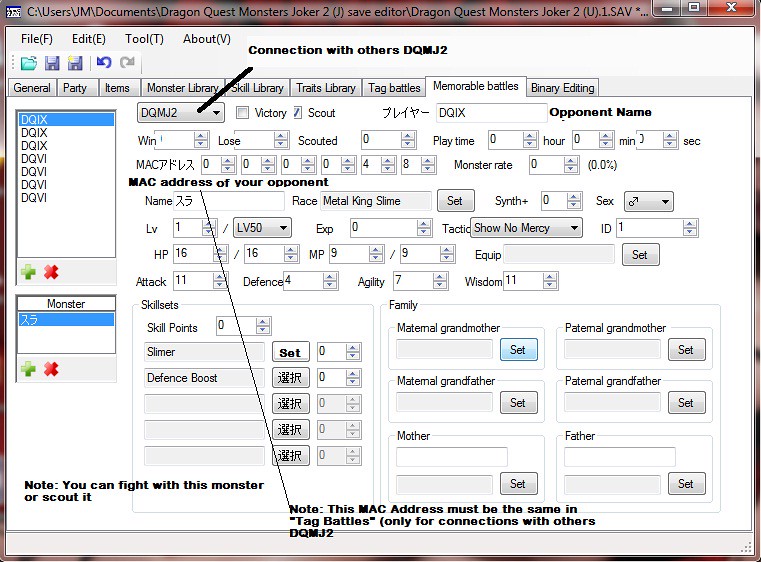 I kind of understand your explanation but it's complicated

ANyway, I was at 250- 400 ms of lag in wow tonight, couldn't stand the ability/display delay so I ragequit ahah

I will make some custom data there to test it ingame, I'll surely understand all this then.

As for now, I will have fun with this tool now that I (or better said, WE) did this. This will be enough for now. I need to understand the rankings on wifi, I know traits, stats, skillsets have an influence on this. Now I need to know exactly how it works hi hi hi !
J

I kind of understand your explanation but it's complicated

ANyway, I was at 250- 400 ms of lag in wow tonight, couldn't stand the ability/display delay so I ragequit ahah

I will make some custom data there to test it ingame, I'll surely understand all this then.

As for now, I will have fun with this tool now that I (or better said, WE) did this. This will be enough for now. I need to understand the rankings on wifi, I know traits, stats, skillsets have an influence on this. Now I need to know exactly how it works hi hi hi !
Click to expand...

Sorry, I only uploaded 3 pics, the last 2 are errors.

"win","lose""victory""scout""scouted" appear on the screen 'cuz you can fight with these monsters and you can scout them.

Here some tips for WMC (World Monster Championship) from someone of gamefaqs (sorry I don't remember his name):


"I was reading the Japanese wiki and I learned something that may be of use to people who are on this board who are participating in the tournament. Apparently there is a handicap system where points are deducted from your wins depending on the rank of your monsters and specific monsters.

Here's the specific paragraph from the Japanese wiki. Note that even though this is for Japanese DQMJ2, the servers are still running the same software as the Japanese one apparent from the amount of Japanese players in the Tournament.

Base points are 20. Winning against higher rank opponents will get bonus points depending on how big the difference is between you and your opponent. Depending on rank, a handicap will be given. Also, certain monsters are heavily penalised. This is the handicap points that will show up when calculating points the next day.

Handicap per win, per monster.

No wonder the top teams that I've fought have low ranked monsters in their team. For example, the no. 9 ranked that I fought yesterday?today(?) was running a Balhib, Metal Slime and Hyper Heyedra. According to the Handicap system, every win will net him/her/it a +4 points per win. That's 120 points per day, per home bout if he wins all home bouts, so that's already 840 points not including away bouts. Including away bouts no wonder some teams get 1500+ points per tally count. Holy crap...


Some more stuff from the Wiki.

There are 5 classes in the WMC: Rookie, Scout, Super Scout, Mega Scout and Ultra Scout.
Classes are determined by the total amount of status points a team has. This includes skill points. Certain traits also greatly affect the class of a monster. Traits like Metal body can increase the class of a team despite the low amount of total points team has.

I'm not sure what traits affect the classes other than the example, Metal Body, given by the wiki. Also, the Wiki does not mention the thresholds that determines what makes player a Rookie, a Scout etc."

I started translating this because I wanted a quick easy way to use several monsters of the same race with different stats, skillsets, levels etc to see exactly what is the key in this equation
J

Hyunckel said:
Yeah I know all of this already as I'm on GameFaqs under the alias KevinSephiroth

I started translating this because I wanted a quick easy way to use several monsters of the same race with different stats, skillsets, levels etc to see exactly what is the key in this equation
Click to expand...

You are DarkSephiroth from neoseeker and pokemon secure?
The battle system is more complex that pokemon

Hey, I think what you're doing is pretty cool. I sent you a PM on Gamefaqs because I was a little unsure about how to actually implement it. I wasn't sure if you ever really checked your Gamefaqs mail though (I know I don't) so I figured I'd go ahead and make a post here to alert you to my question in case you hadn't seen it. Thanks.