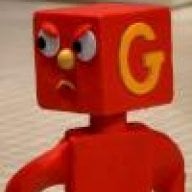 So, am I the only one who wants a Dark Cloud 3 to come to playstation? If you are unaware what Dark Cloud is, it is a playstation series started by Level 5 Entertainment. The original game released in 1999 and 2000 in the US (They are a Japanese company). The second Dark Cloud or as called in Japan: Dark Chronicle, was released in 2003 for the Playstation 2. Both games were praised and some consider them the Zelda of playstation. I for one want a third one to be released.

EDIT: I just realized that I put "know" in the title instead of "no" my bad!
Reactions: 1 person
R

Level 5 went with WKC instead of another Dark Cloud I thought. Dark Cloud may have sold decently for almost launch title but I think Level 5 wanted to go a new direction after the sales of Dark Cloud 2 which weren't bad but not as great as the first.

I would love to see a Dark Cloud 3 myself, but I don't think it's going to happen sadly

I really feel like a company like nintendo buy the rights. I know it most likely won't, but I fell like they would do a good job with it.

unfortunately level 5 keep churning out those professor layton games for casual players, because it makes them so much money they have comply forgotten about another dark cloud game which is a shame.

jalaneme said:
unfortunately level 5 keep churning out those professor layton games for casual players, because it makes them so much money they have comply forgotten about another dark cloud game which is a shame.
Click to expand...

While they have indeed been 'milking' Layton per se, they still make some really great rpgs like White Knight Chronicles, Ni no Kuni, Inazuma Eleven (I don't like football, but I just love the IE games) and Danball Senki (another great and unique game, which is a shame that it hasn't been localised). They're just some examples of their recent games, and they're pretty good in general, personally I also liked Dark Cloud (mainly 2 over the first one tho), but I just assume it wasn't as big a success as they were expecting it to be.
R

jalaneme said:
unfortunately level 5 keep churning out those professor layton games for casual players, because it makes them so much money they have comply forgotten about another dark cloud game which is a shame.
Click to expand...

Blame the amount of fans they said they make it if there was enough support and as I said above Dark Cloud 2 sales were low compared to the first.
So there 9 Professor Layton games with a untitled game on the way and a film and another film on the way . They still create some unique games as said above but localization of most of them doesn't happen.