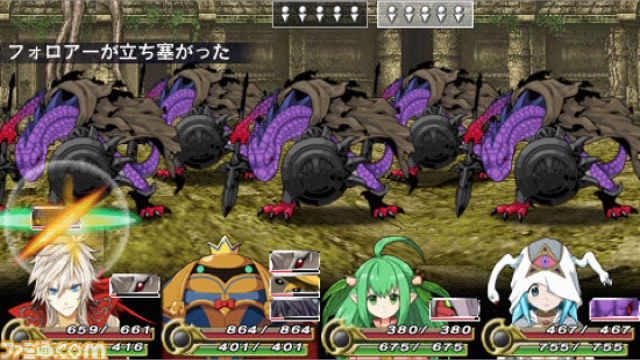 Dungeon crawling Japanese RPG from FuRyu comes Unchained Blades! The game is a first person dungeon crawler with a turn-based battle and able to recruit monsters in battle via the 'unchain' system. The game will be released on PSN for PSP (and compatible with Vita no doubt) and eShop for 3DS in 2012. Expect more news from XSEED soon! Check the announcement trailer below and PR in the spoiler!

Torrance, Calif., (March 28th, 2012) – XSEED Games, an independent-minded publisher, is pleased to announce today that the company will be bringing the dungeon-crawling RPG title, Unchained Blades, to gamers in North America on both the PSP® (PlayStation®Portable) system and the Nintendo 3DS™ hand-held system in 2012. Originally released as UnchainBlades ReXX in Japan last summer and developed by FuRyu, Unchained Blades is a role-playing game set in a monster-filled world, and was directed by Toshio Akashi of the Lunar series, while the game’s story was penned by Grandia series veteran Takashi Hino.

“We at XSEED Games are delighted with the opportunity to bring a title like Unchained Blades to North American gamers,” said Ken Berry, Director of Publishing at XSEED Games. “Unchained Blades represents a collaboration between some of Japan’s most high-profile developers and artists, offering a unique blend of classic RPG gameplay paired with an eclectic mix of art styles.”

Unchained Blades follows the story of the dragon emperor, Fang, who after being stripped of his powers by the goddess Clunea, embarks on a journey for revenge and to regain his true form. Arrogant and vengeful, Fang is joined in his quest by a cowardly golem prince, a shy medusa priestess, a young phoenix clan maiden, and many other mythical beings seeking to meet with the goddess.

Due to the collaborative nature of the game’s design, each of the 13 main characters was created by a different artist. The main character Fang was designed by Pako, most famous for his work on the Shining Force series, while other characters were fashioned by artists such as Toshiyuki Kubooka (Lunar), Shinichiro Otsuka (Summon Night), and Kazushi Hagiwara (Bastard!!), to name a few. As such, each character has its own distinct and signature style.

In Unchained Blades, players journey through the game with a party of up to four characters, moving through dungeons in a first-person perspective and engaging in turn-based combat along the way. Using the game’s unique “Unchain” system while in battle, players are able to try and convince monsters to follow them. If they are successful in using the Unchain system, the enemy monster will then join their party and help them in the future by blocking attacks or supplying players with special offensive abilities. Each character in the player’s four person party can hold up to four "followers", ensuring plenty of combat variety. The game has also been completely redubbed with new English voice-overs and boasts over 60 hours of gameplay.

Developed by FuRyu and published by XSEED Games, Unchained Blades is currently in production and will release as a digital download on the PSP system and Nintendo 3DS in 2012. XSEED Games will be sending out more product info in the coming months.

About XSEED Games:
XSEED Games was formed in November 2004 by a small group of industry veterans led by president Jun Iwasaki with a common vision: to cross pollinate the avid gaming cultures of Japan and North America. Delivering unique, innovative titles across multiple platforms and genres, XSEED Games is dedicated to publishing products that appeal and enrich the North American market. More information on XSEED Games can be found at http://www.xseedgames.com
http://www.youtube.com/watch?v=_OcU7AZUn0Y

I searched YouTube expecting to get a Japanese trailer but it looks like XSEED has released an official one!
EDIT: Added to OP, removed from here.

Thanks. It only showed like a couple second of gameplay though. What type of RPG is it?

@[member='Foxi4']: Thanks. That trailer showed a bit more gameplay.

Hyro-Sama said:
Thanks. It only showed like a couple second of gameplay though. What type of RPG is it?
Click to expand...

Hmmm psp version I can't pirate but use cheats for or 3ds version on a system that hasn't been hacked yet, thus lacks cheats. Plus I have to pay for it either way. Does nintendo deserve my money for this or does sony?

chartube12 said:
Hmmm psp version I can't pirate but use cheats for or 3ds version on a system that hasn't been hacked yet, thus lacks cheats. Plus I have to pay for it either way. Does nintendo deserve my money for this or does sony?
Click to expand...

Neither... XSeed and FuRyu are the ones getting your money.

edit - from a practical standpoint, whichever has longer battery life. Also, I thought this game already came out...?

This actually seems a pretty nice game, a eshop game that ahs voice acting and all that, plus, the graphs seem pretty good (were the vids posted showing the 3DS or psp version btw?)
Is there any info on an European release btw?

So the games are identical a side from the 3ds having an always on map. Now my finale question, What's the price for each?

@ Psionic Roshambo: With that camera nothing is hidden lol +1 54 minutes ago
Chat 0