I present to you the Tell-A-Joke Thread!
Share your best (or worst) haha's here.
I'll start with some bloody puns.


I told my doctor that I may never find out my blood type. She said "be positive."

The nurse asked to draw blood. So I drew a bee.

My pen pal wanted to know what blood type I was, so I wrote him a letter.
Last edited by IncredulousP, Aug 28, 2019, Reason: unnecessary information
Reactions: Mama Looigi and Alexander1970

Ok I got another one.

A mama tomato and baby tomato are walking. The baby tomato starts walking too slowly, so the mama tomato turns around, stomps on the baby and yells "ketchup!"
Reactions: Deleted member 507653 and Alexander1970

Why wouldn't the skeleton ask his crush out on a date? Because he had no guts!

Why didn't his skelefriend tell him she was already taken? Because he didn't have the heart.

Why was the skeleton worried? Because he was boned.


Ready for a groaner?

Why did the skeleton go to the doctor?
He was running a high femur.

Ready for this one?


What do you get when you mix human DNA with goat DNA?

You get kicked out of the petting zoo.
Reactions: Subtle Demise and Alexander1970

A Duck walks into a Milkstore,the Vendor asks "What do you want ?"
The duck answers "Quark....."
Reactions: IncredulousP

Why did the spoon divorce her husband?
He was forking around with other silverware.
Reactions: Subtle Demise, Mama Looigi and Alexander1970

Three guys are hiking through the woods and they find a lamp.

One of them picks it up, rubs it, and out pops a Genie. It booms "You have finally freed me after all these years, so I'll grant each one of you 3 wishes."

The first guy immediately blurts out "I want a billion dollars." POOF, he's holding a printout that shows his account balance is now in fact 1,000,000,003.50 The second man thinks for a bit, then says "I want to be the richest man alive." POOF, he's holding papers showing his net worth is now well over 100 billion. The third guy thinks even longer about his wish, then says "I want my left arm to rotate clockwise for the rest of my life." POOF, his arm starts rotating.

The Genie tells them it's time for their second wish. First guy says: "I want to be married to the most beautiful woman on earth." POOF, a stunning beauty wraps herself around his arm. Second guy says "I want to be good-looking and charismatic, so I can have every girl I want." POOF, his looks change and the first guy's wife immediately starts flirting with him. Third guy says "I want my right arm to rotate counter-clockwise until I die." POOF, now both his arms are rotating, in opposite directions.

The genie tells them to think very carefully about their third wish. First guy does, and after a while says "I never want to become sick or injured, I want to stay healthy until I die." POOF, his complexion improves, his acne is gone and his knees don't bother him any more. Second guy says "I never want to grow old. I want to stay 29 forever." POOF, he looks younger already. Third guy smiles triumphantly and says "My last wish is for my head to nod back and forth." POOF, he's now nodding his head and still flailing his arms around. The genie wishes them good luck, disappears, and the men soon go their separate ways.

Many years later they meet again and chat about how things have been going. First guy is ecstatic: "I've invested the money and multiplied it many times over, so me and my family will be among the richest of the rich pretty much forever. My wife is a freak in the sheets, and I've never gotten so much as a cold in all these years." Second guy smiles and says "Well, I built charities worldwide with a fraction of my wealth, I'm still the richest guy alive and also revered for my good deeds. I haven't aged a day since we last met, and yes, your wife is pretty wild in bed."

Third guy walks in, flailing his arms around and nodding his head, and says: "Guys, I think I fucked up."
Reactions: Subtle Demise, VinsCool, IncredulousP and 2 others

Go in a round room and spit in the corner.
Reactions: IncredulousP
D

Knock knock. Who's there? Doctor. Doctor who? No, Doctor Octupus.

MicmasH_Wii said:
Knock knock. Who's there? Doctor. Doctor who? No, Doctor Octupus.

this thread right here, in a nutshell
Last edited by , Aug 28, 2019
Reactions: IncredulousP, Jiehfeng and Alexander1970

Not old enough to remember, but it has jackie chan in it, so a win
Reactions: IncredulousP and Jiehfeng

I was wondering how snow kept getting into my house. Turns out my door was a jar.
Reactions: Deleted User, Jiehfeng and Alexander1970

What is yellow/black striped,flys and make "mmus mmus mmus" ?
A Bee in backward flight.
Reactions: IncredulousP and Deleted User

MicmasH_Wii said:
this thread right here, in a nutshell
Click to expand...

No, this is this thread right here in a nutshell: 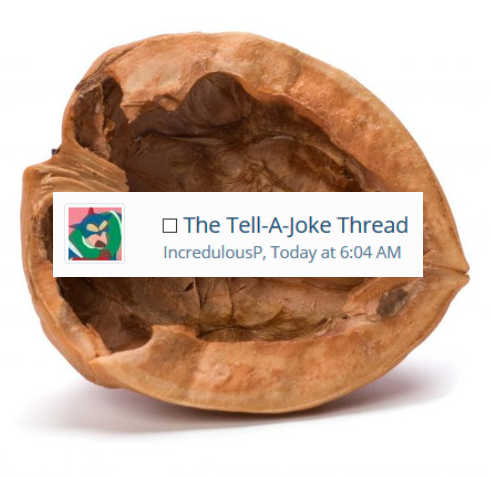 I have a serious question to ask you
why are you using the default white theme?
Reactions: Alexander1970

*prerecorded laughters from the 1960's*
Reactions: Subtle Demise, Mama Looigi, IncredulousP and 3 others

MicmasH_Wii said:
I have a serious question to ask you
why are you using the default white theme?
Click to expand...

Why not?
Reactions: Deleted User
D

cause white is racist

J
Rumor I am WiiMiiSwitch