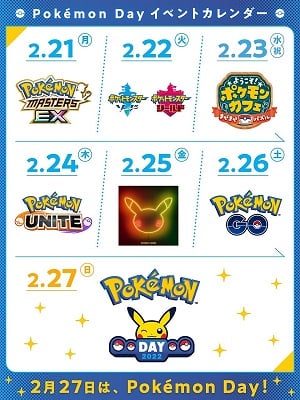 ​
The Pokémon Company has announced it will be holding special events in a number of their games and apps this week in the leadup to Pokémon Day. TPC has even set up a special website for this event, although it's only in Japanese.

The celebration kicked off yesterday with a number of events in the free-to-play mobile game Pokémon Masters EX, including the Villain Event Spreading Shadows where you can boost Giovanni and Mewtwo and the Extreme Battle Event Giovanni's Malice that lets you fight Giovanni. Full details for this event can be found here, although Nintendo Everything has also translated the full list of events into English.

Today, Pokémon Sword & Shield has a new Max Raid Battle event featuring Gigantamax versions of the three Kanto starters, Charizard, Blastoise, and Venusaur. You can also get Max Mushrooms as an additional reward for beating them. The event will run until February 27, 2022 at 3:59 PM PT / 6:59 PM ET.

We will see more events and announcements throughout the rest of the week, with each day being dedicated to a different games. The schedule is as follows:

While not directly related to Pokémon Day, it's also worth noting that the 1.2.0 patch of Pokémon Brilliant Diamond & Shining Pearl also released today, adding more functions to Union Rooms and the Colosseum, while also fixing general issues. The patch notes can be seen below:

Enter the Colosseum on the 2nd floor of a Pokémon Center to battle with other players using custom rulesets.​
In the Colosseum, you can set rules, such as the number of Pokémon to send into battle as well as their levels, and play Single Battles, Double Battles, or Multi Battles via local or internet communication.​
Pokémon Trading and Battles

Some Pokémon acquired via unintended methods or illicit modification now cannot be used in Link Trades or Link Battles.​
Fixed some issues for more pleasant gameplay.
Click to expand...

Oh snap. Can't use modded Pokémons no more in BD/SP?

Unsure about the legality checks but there's a new function to check for cloned Pokemon that puts a permanent mark on any dupes you have that prevents it from being traded or used in online battles. It's worth noting that if you have any duplicates, one of them is left unmarked though.

What about PLA?
Reactions: StrayGuitarist
R

How about celebrating by investing a good amount of money on them and make em AAA? there is cero risk in that investment, their fans buy millions in days now. These people are reaching a point were microsoft is starting to look a good gaming company lol.