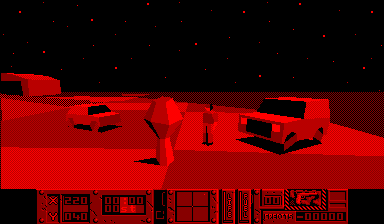 Planet Virtual Boy has recently sponsored a Homebrew competition. If you are not aware the VB has a Flash Kit and some of these projects have been designed with that in mind. Please check the homepage for more information and download links.

That remake of Hunter looks cool.

Hunter was awesome, one of my favourite games on the ST. Sadly it had a bad crack and crashed when you entered the store.

I continue to kick myself to this day, 10 years ago I had the opportunity to buy a pristine VB with like 10 games (pretty much the entire library) for 45 dollars a small used electronics/games shop, but instead I ended up buying a Japanese copy of Dragon Ball Z Ultimate Battle 22 with a special boot disc for the PSX instead (was a huge DBZ fag at the time). DBZ Ultimate Battle 22 in case you don't know is one of the worst fighting games invented. And now that there is a flashkit available I really want to pick one up. It really is a terrible device, but such a cool idea/concept.

It is nice that there is work being still done on such bastard systems but the Virtual Boy gave me a headache after only a few minutes. Not sure if it was the 3D or the mono red... Probably the latter...