GBAtemp game of the week #46

GBAtemp book game club time. Once more for those just joining us the general idea of the series is each edition a selection is made and then those that wish can play it and discuss it among the others in the thread.
Selections are made using several criteria most of which we do not wish to elaborate upon beyond a statement of intent that reads this is not a top ? games list as those are everywhere and miss out on some of the games that despite falling short of true greatness/timelessness are well worth knowing about.
Occasionally we will add in additional criteria like not publishing in North America but was published in Europe (a surprisingly long list of titles here many of which you might not have expected) or something along the lines of published early in the system lifetime in a limited run and as such are quite hard to find or available for next to nothing right now. Equally we might do a compare and contrast or pose a challenge within a game (achievements/trophies- good version if you will).
Systems covered will tend to be the GBA, DS and Wii or if not the systems will be able to emulated after some fashion on the handhelds) and as each has a sometimes still growing library of commercial games, rom hacks, leaked betas/unreleased titles and homebrew we have an awful lot still to look at.

Although better known for the ninja gaiden and dead or alive franchises temco also make a series of monster raising games known as monster rancher that have found a home on the handhelds these last few years (the PS1 and PS2 saw a bunch of great entries but since it has been handhelds). Monsters.... raising... fighting monsters.... faux rural setting... fear not this is not a pokemon clone and indeed has more in common with the likes of harvest moon, the likes of spore and old school RPGs than that flooder of forums and indeed in some cases is offered up as the anti pokemon. For the main line and most handheld lines (some spinoffs exist) the general idea is you create an initial a monster by various means (the console ones harkening back to the likes of inner space and barcode battler by taking real world files from CDs and DVDs) and then through breeding, training, fighting and upkeep you create a personalised monster or indeed one of the finest in the land if that is your desire (the mechanics are such that it often allows for deep customisation and rewards for it as well as allowing a more casual playthrough to get things from it). It is quite slow paced and might even take a while to get going but those that played the various incarnations often count it among their favourite games. It has since spawned an online game or two, saw a fairly long running anime and also has an entry on mobile phones (android in this case- it is about 17 megs and free although we have not played it) as well. 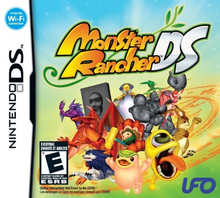 Pokemon by any other name, a boring farming sim or is there something special underneath it all?[/p]

i really liked this game but i felt tht after a time, it was grinding and repetitive. all games are like tht but this one stayed for more which made it fun.
espcially the fact tht u can have different types of monsters allows replayability

@ Psionic Roshambo: Psi has over 800 women on his Facebook now.... Like holy hell women be thirsty +1 2 minutes ago
Chat 2