Best Time to See the Leonid Meteor Shower Is Now 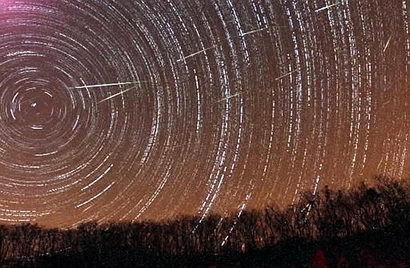 The Leonid meteor shower of 2010 is peaking this week and the best time to see the sky show is now.

The annual Leonids should be at their best through Nov. 18, according to skywatching experts. Avid meteor gazers graced with clear skies may see between 15 and 20 meteors per hour.

Skywatchers should look toward the constellation Leo in the eastern sky to see "shooting stars" from the Leonids, which appear to radiate out of the constellation. The best time to try to see the Leonids are in the last two or three hours before sunrise, when the moon has set.

Click image to see photos of past Leonid meteor showers

A Leonids sky map posted here shows where to look in the predawn sky.

"From the time of moonset until around 5:15 a.m. -- when the first streaks of dawn begin to appear in the east -- the sky will be dark and moonless," advises Joe Rao, SPACE.com skywatching columnist. "That interval will provide you with your best opportunity to see any Leonid meteors." [Gallery: Spectacular Leonid Meteor Shower Photos]

Another tip: Make sure to stay warm and get comfortable.

"If you have a lawn chair that reclines, use it during your search for Leonid meteors since it will help keep your neck from getting stiff as well as make it easier to look at the night sky," Rao said.

The Leonid meteor shower is an annual event that returns every mid-November. The shower is caused by material left behind the comet Tempel-Tuttle when it passes near Earth's orbit during its regular trip through the solar system. [Top 10 Leonid Meteor Shower Facts]

When the Earth passes through these knots of comet material, the gas and dust flares up in the atmosphere, creating spectacular meteors.

Every 33 years, the Earth encounters a dense knot of material -- most recently in 2002 -- to create dazzling displays of shooting stars. During those showers, it can be possible to see hundreds or thousands of meteors per hour.

That isn't the case this year because the Earth is passing through a less dense area of Comet Tempel-Tuttle's trail, Rao said.

But with fewer meteors expected this year, you may want to travel a bit to find the best spot. Meteor-gazing from a rooftop in suburbia doesn't always offer the best view.
"For your best view, get away from city lights. Look for state or city parks or other safe, dark sites," advise the editors of StarDate magazine at the McDonald Observatory in Texas. "Lie on a blanket or reclining chair to get a full-sky view. If you can see all of the stars in the Little Dipper, you have good dark-adapted vision."
[/p]

Unfortunately, I have to pack for vacation. I won't be seeing these, even though I'm learning about space in school

ron975 said:
Unfortunately, I have to pack for vacation. I won't be seeing these, even though I'm learning about space in school
Click to expand...

that's ... TOMORROW ?!
what time should i look outside to see the meteor shower ?

and add a time period, so i can change it to EST if it isn't already xD.

Splych said:
that's ... TOMORROW ?!
what time should i look outside to see the meteor shower ?

and add a time period, so i can change it to EST if it isn't already xD.
Click to expand...

Sorry, I can't, because i dont know the time of when it is going to happen.

Everywhere in the world? :X