Hacking How can I decrypt my retail Pokemon X save for use on Gateway? 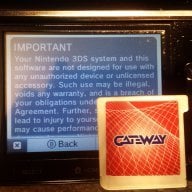 I used Gateway's built-in ROM dumping function to dump my retail Pokemon X cartridge. I know that the generated .3ds file also includes the save. But when I try to launch the dumped ROM, it gives me an error saying the save is corrupted. I can't dump it in SaveDataFiler either; it says "CTR Card -- broken --" and won't let me export it. I tried booting in classic mode and actually inserting the cartridge, but then SaveDataFiler doesn't open. I also tried installing SaveDataFiler on sysnand, but when I reboot without Gateway the icon doesn't appear.

I'm aware that this is a known issue, and an email reply someone posted from Gateway support implies they're working on a fix. But is there any way right now to decrypt the save from the cartridge so I can use SDF to import it into the dumped ROM?

Not if you played it on a legit console / 9.2 console with GW Ultra. Then it will be using 6.x encryption and there is no way currently to decrypt that, I don't think even mt-card can do it.
V

You can if you have a Powersave : https://gbatemp.net/threads/tutoria...oras-saves-to-gateway-with-powersaves.378513/

VerseHell said:
You can if you have a Powersave : https://gbatemp.net/threads/tutoria...oras-saves-to-gateway-with-powersaves.378513/
Click to expand...

Thanks; I don't have one, but I sent a PM to the guy who created the thread asking if he could help.

How to do RAM dump of DS cartridge? (trying to extract save from repro cart)