XBLA<br/>
South_Park_Tenormans_Revenge_XBLA_XBOX360-XBLAplus About 640 megs. <br/>
South park games have a bad history and this seems to be a somewhat average puzzle platformer (thing super meat boy or lost vikings) <br/>
Diabolical.Pitch.XBLA.XBOX360-MoNGoLS Nearing 610 megs.<br/>
http://www.411mania.com/games/reviews/232170 <br/>
Pinball.Arcade.XBLA.XBOX360-MoNGoLS Just over 120 megs.<br/>
http://www.gaming-age.com/2012/04/the-pinball-arcade-review-for-xbla-psn/ <br/>
<br/>
Kinect<br/>
Kinect_Star_Wars_NTSC_XBOX360-iCON and Kinect.Star.Wars.PAL.XBOX360-COMPLEX<br/>
In talking about this game one must link the video http://gbatemp.net/topic/324305-kinect-star-wars-gameplay-im-han-solo/
<br/><br/>
The.Witcher.2.Assassins.of.Kings.PAL.XBOX360-SWAG<br/>
Region locked PAL by the looks of things (NA release is due in just under two weeks so it could be any time now)<br/>Looks like it is two discs (swag-tw21 swag-tw22)<br/>

Personally I played the first witcher on the PC (and not even the enhanced/tweaked/1.5 version) and quite liked it. It was previously released on the PC and did quite well there. Equally other than maybe Bloodforge and the fable action game you are looking at just over month weeks until the next big RPGs in the form of Risen 2: Dark Waters and the game of thrones game.<br/>
<br/>
Amazon sourced words<br/>
Additional hours of gameplay for the Xbox 360: New major adventures set in previously unseen locations, expanding the story and introducing new characters, mysteries and monsters.<br/>
New Game Introduction and cinematics: All new animations and cut scenes, including a new, three and a half minute pre-rendered cinematic depicting the assassination of King Demavend of Aedirn. BAFTA Award winner and Academy Award nominee Tomasz Baginski brings this key historical event to life, setting the stage for the story told in The Witcher 2.<br/>
Upgraded interface, designed specifically for the Xbox 360: Game camera and targeting have been redesigned for the Xbox, and with upgraded pad controls, players will now be able to experience fully The Witcher 2’s spectacular and thrilling combat.<br/>
<br/>
The award-winning PC RPG comes to Xbox 360!<br/>
<br/>
The player is Geralt of Rivia, a professional monster slayer, a witcher. Entangled in the political turmoil that engulfed Temeria, Geralt helped quell the rebellion of the Order of the Flaming Rose. Soon after, he saved King Foltest’s life when the monarch was attacked by a witcher-like assassin. He continues to protect the king, serving as his bodyguard as Foltest strives to bring peace to his kingdom. The Order’s last bastions have yielded to the royal army, yet one more task remains - the Baroness La Valette announced her secession from the realm, and her fortress must be taken. A month after the attempted assassination, Foltest’s armies stand at the gates of La Valette Castle, preparing for a final assault. Still at Foltest’s side, Geralt is among them, unable to begin his personal quest to discover the mysterious assassin’s origin and identity…<br/><br/>

Thanks to the new, ultra-modern REDengine, The Witcher 2: Assassins of Kings features both beautiful graphics and sophisticated in-game mechanics, drawing players into the most lively and believable world ever created in a video game. A completely immersive visual experience, The Witcher 2 on Xbox 360 is arguably the best-looking RPG ever to come to consoles.<br/><br/>

Defining new standards for realistic, non-linear game narration, The Witcher 2 spins a mature, thought-provoking tale to produce one of the most complex and unique RPGs ever released on consoles. In addition to its epic story, the game features a complex combat system that uniquely combines dynamic action and tactical depth.<br/><br/>

Unique, deep, consistent and rich game world established in a series of best-selling books by A. Sapkowski and recreated in the game to provide an incredible, believable story-driven experience. Every decision may lead to dire consequences - your choices impact relations with other characters and entire communities, and may even influence the political situation in the Northern Kingdoms.<br/>

The Witcher 2 leads players through different gameplay paths to 16 different endings, making it one of the most non-linear and complex storylines ever brought to the console market.<br/>

The game world teems with life. The most detailed, lively and highly varied locations ever seen on consoles include the mighty La Valette Castle, the bustling dwarven mining town of Vergen, multiple border garrisons and fortresses, ancient forests, and the vibrant trading post and river port of Flotsam.<br/>

The PC version of the Witcher 2 was praised by both fans and critics, making it one of the best RPGs of 2011. The Witcher community is very active, and the developers engage fans constantly to solicit opinions and insights. Many ideas put forth by fans were included in The Witcher 2 and significantly enhanced the gaming experience.The game has been distinguished by many awards and high review scores. Despite only having been available for a short time, IGN included The Witcher 2 in its list of the Top 25 Modern PC Games.<br/><br/>

A truly epic, intense, emotionally charged adventure with non-linear game narration. Three independent plot lines with several alternative events are dependent on the player’s choices and lead to multiple different game endings and several additional plot forks. This time gameplay time will be shorter than The Witcher 1, but more intense and packed with events.<br/>
A complex, realistic and mature story touching upon subject matter seldom seen in other RPGs, told in a manner that is understandable and attractive to contemporary gamers. We investigate the assassinations of the rulers of the Northern Kingdoms and follow Geralt’s personal theme, in which he’s looking for his own identity. Gradually we learn how powerful forces influence our situation and what role they order us to play.<br/>
Rich, mature dialogue as found in Andrzej Sapkowski’s book series and The Witcher 1, presented in highly filmic cutscenes and dialogues sequences, thanks to a new game engine.<br/>
New, improved system of flashbacks. Now the reminiscences of Geralt, in which we observe the link between our past choices with current actions, are realistically and smoothly woven into the gameplay.<br/>
Sex and eroticism will be introduced in a much more realistic, involving and mature way, thanks to which sexual relationships are presented more credibly than in TW1.<br/>
Unique, deep, consistent and rich game world established in a series of best-selling books by A. Sapkowski and recreated in the game to provide an incredible, believable story-driven experience.<br/>
Believable, true-to-life characters with their own motivations and goals. During our journey we meet ordinary men, soldiers, rebels, powerful mages, rulers and their assassins. Depending on our decisions we meet different game characters, and our relationships shape further actions in the game.<br/>
Highly varied, breathtaking locations, which thanks to the new engine create a cohesive, fully accessible world!<br/>
Rich, living world in which every character has their own way of life and unique occupations. Our actions modify the relationship with the game-world population and, in the case of the main plot line, open or close the possibilities of interaction with the game world.<br/>
Greater freedom of exploration to provide increased game realism and a wider range of new tactical options. Geralt will surmount barriers, jump over fences, scale walls and ascend rock formations.<br/>
A beautiful new graphic Red Engine based on State-of-the-Art , ultramodern technology created by CD Projekt RED.<br/>
<br/>
WHAT THE PRESS ARE SAYING...<br/>
<br/>
"... redefines expectations for an entire genre." NY Times<br/>
"... one of the finest role-playing games in years and certainly the most beautiful." Gamespot.com - 9/10<br/>
"one of the best role-playing games in years." IGN.com - 9/10<br/>
"one of the best adventures we’ve ever undertaken" Games Master Gold Award – 94%<br/>
"A new king of role playing" PC Format Gold Award – 92%<br/>
"An experience that’ll be tough to beat - not just for future RPGs, but all future titles" Bit-tech.net Premium Grade Award – 95%<br/>
"This standout RPG is among the best in years, and one that simply begs for multiple playthroughs." Gametrailers.com - 94/100, PC
Golden Joysticks – Ulitmate Game of the Year Nominee or Best RPG Runner-Up 2011<br/>
<br/>
Video<br/>
http://www.youtube.com/watch?v=X-HTRcg7X3M
<br/> 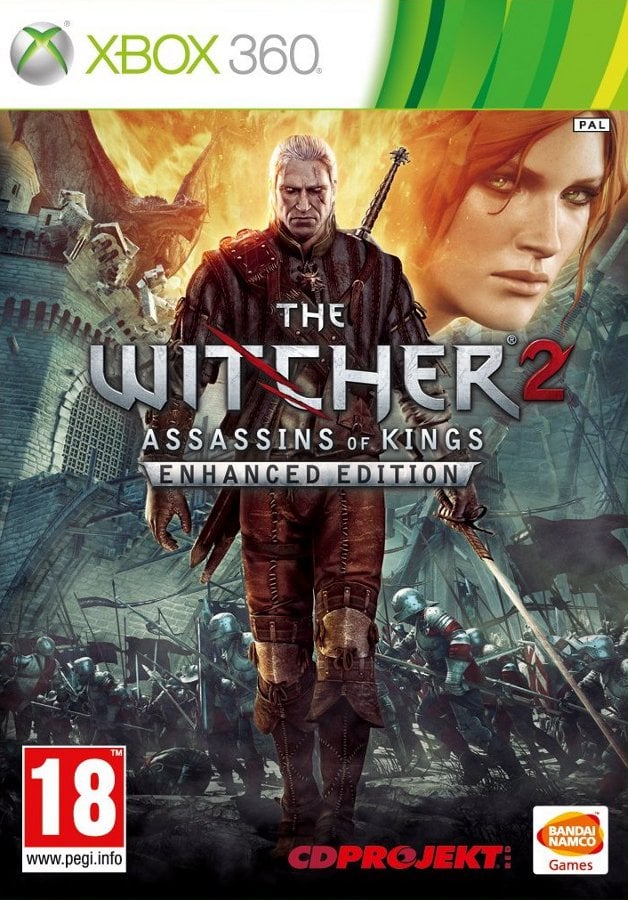 Nintendo 3DS Today at 11:22 AM
AliceWalsh

General Gaming Yesterday at 10:15 AM
DaniPoo

@ FAST6191: being drunk in school was either because drunk on playing field or could not be arsed with one... 2 minutes ago
Chat 1