MarioKartFan said:
Is there a way to hide grom.bin and exec.bin from the file select screen? Not a real big deal, but they're just sitting there.
Click to expand...

Great idea - yeah, it's easy enough to hide them from the listing. I'll do that on the next check-in!

Edit: and done! The exec.bin, grom.bin and ivoice.bin (if present) will all be hidden and not count as one of the game ROMs.
Last edited by wavemotion, Sep 13, 2021
Reactions: Indy13, RocketRobz, CrashMidnick and 2 others
B

ber71 said:
Could you blacklist their nointro names too?
For example
[BIOS] Intellivoice (USA, Europe).int
Click to expand...

Yep. In fact, I can skip anything that starts with [BIOS].
I'll also add the no-intro names as alternates so that if it doesn't find the common short names, it will find the no-intro names. I may (down the line) just search the directory for the proper CRC32 hash to auto-detect the BIOS files no matter their names. But one step at a time... I still need to beat AD&D Cloudy Mountain on the hardest (disc) setting!
Last edited by wavemotion, Sep 13, 2021
Reactions: Indy13, RocketRobz, banjo2 and 4 others 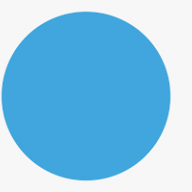 And thanks very much for the d-pad options Dave. That is great (and quick)! Much appreciated once again
Reactions: banjo2, wavemotion and CrashMidnick

just wanted to say that thanks to your EMU I have gotten back into Thunder Castle after a 30+ year hiatus. What an amazing game. Some of the best “pixel art” of all time with music that was ahead of everyone else. Surprised that I’ve never seen it pop up on a “greatest” retro games of all time. Runs flawlessly on your emulator.
Reactions: Zense, banjo2, wavemotion and 2 others

Thunder Castle is outstanding. Some people find it a little slow - but I'm fine with the default speed. There is a version of the game floating around out there called Mystic Castle that speeds up gameplay and tweaks a few other elements which is also fun to play - that will likewise play fine on Nintellivision.
Reactions: banjo2

So I'm at a crossroads... I'm experimenting with custom overlays. Ones you can supply in BMP or similar format along with a .OVL overlay file specifying the hotspots for the touch screen. This way you can lay the buttons out wherever you want - have as few or as many as you like and when the user touches the hotspot it will activate one of the 12 Intellivision keys or one of the 5 Meta keys (Reset, Load, Config, Scores, Quit). Of course you don't actually have to draw the meta labels anywhere - you can keep your overlay nice and clean and just know that clicking in the upper left will load a new game, etc.

However, I estimate that this is going to come at a cost of another 30-50 hours of effort to make it clean. My guess is there are like 3 people on the planet that would use this. That seems like a lot of life energy to dedicate to something so few people will even use/see. I feel like it would be better to get another emulator running in that same timeframe 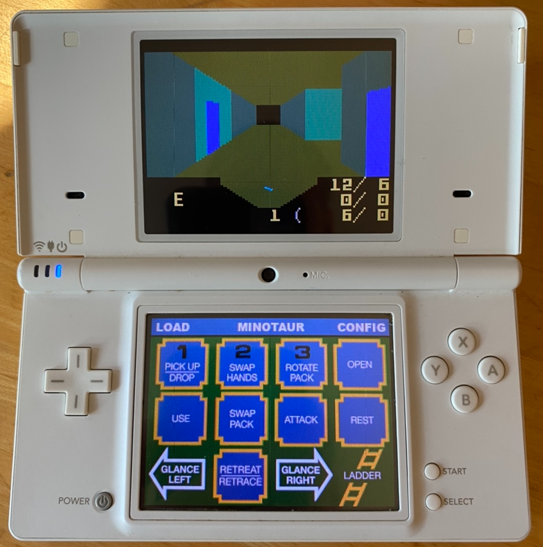 wavemotion said:
I feel like it would be better to get another emulator running in that same timeframe
Click to expand...

Now I am curious

IMHO, this is a waste of time to spend so much time only for overlays. This emulator already does the most importing thing : launch Intellivision games with almost no issue.

I tried to make some (Pole position and Frogger), this is really a pain when it is not your job or passion.
Reactions: banjo2 and wavemotion

That looks amazing. But that seems like a tremendous amount of work, even if it would lead to beautiful results. Would it be an easier option to just let us swap in scans of the original overlays? Appreciate that you don’t want to include those in your distribution but there are widely available scans that if we could just drop a png or bmp into the correct directory with the correct dimensions.
Reactions: banjo2 and wavemotion

Yeah, it's probably more work than I want to do ... but it sure looks nice. Maybe I'll hide the two AD&D game overlays obscured in the code and only accessible by special key combinations known to a few 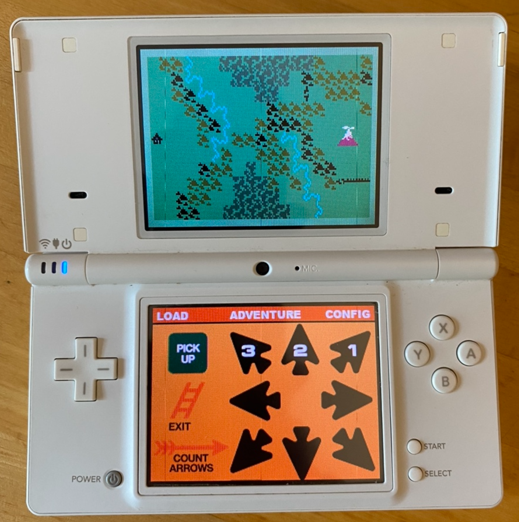 wavemotion said:
by special key combinations known to a few
Click to expand...

wavemotion said:
Yeah, it's probably more work than I want to do ... but it sure looks nice. Maybe I'll hide the two AD&D game overlays obscured in the code and only accessible by special key combinations known to a few

That is unbelievable. I am changing my vote. This is amazing.
Reactions: banjo2 and wavemotion

Unfortunately Mystic Castle does not load in this emu. Any idea why that would be?
Last edited by MarioKartFan, Sep 14, 2021

I don't have Shark Shark2 so that one won't be in knowncarts.cfg

It's possible the Mystic Castle you have is different CRC than the one I have. You will need the CRC of the .bin file.

I'll work with you offline to get it running.
Last edited by wavemotion, Sep 14, 2021
Reactions: banjo2

The really awesome Donkey Kong homebrew seems to have a significant graphic glitch when DK is scaling the girders at the start of the game and when he scales the ladder at the end of various levels. Have you seen that on your end?
Reactions: wavemotion and banjo2

Yeah, I've seen that... his back is transparent when climbing. No idea what causes it ... it's on the list of things to look at "someday". Fortunately, the gameplay and collision detection is good on DK ARCADE so it's not so bad.

It's a great port! At one time the author was selling DIIK with all new levels and a ton of polish... for $10 which is a great price. But now it's only available locked to the LTO Flash-Cart (each cart has a SN and the rom you get is only unencrypted for the LTO you own).|

Edit: just checked the BLISS32 core on Windows and it has the same transparent DK back when he's climbing the girders in the cut-scenes. So it's a core bug - probably been in the code for 20 years
Last edited by wavemotion, Sep 15, 2021
Reactions: Indy13, Zense and banjo2

Custom overlays are going to be a thing. But I'm putting some of the burden on the end-user. Not only will they have to use something like GIMP (open source and freely available on most major platforms) to make their custom overlays, but they will have to run it through a tool to prepare it for inclusion in the emulator. In the end, you will have a .OVL file that has the same base name as the ROM you want to play. The .OVL file will contain the key hotspot map (for the touch-screen) along with the graphical data in hex format (that's where the tool comes into play). This keeps it all to a single file - and makes my life easier. Plus, this way you can have a custom overlay for as many or as few games as you like. You can always pick one of the 10 built-in overlays - and by default you just get the non-overlay buttons 0-9, CLR and ENTER as always.

Checkin coming after sleep and coffee... and some testing. Might need a guinea pig to help test this out
Last edited by wavemotion, Sep 15, 2021
Reactions: Indy13, ber71, CrashMidnick and 4 others

This morning I built an example custom overlay that won't win any awards for style but will show how to build a custom overlay. I took a screenshot to get the ship and hand-drew the green ground and white stars. The font is stock Arial Bold. So I feel comfortable releasing this example overlay with the emulator as a template of how to do it. The red is a little too harsh and I may change that to a light blue instead. I guess that's why they call it "custom" 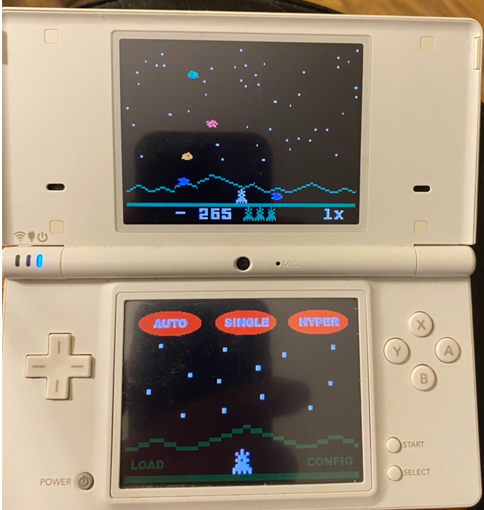 Okay... 1.3c is checked in. Not ready for release yet but if you grab the latest NINTV-DS.NDS from the main check-in directory here you will have the latest with Custom Overlay support: https://github.com/wavemotion-dave/NINTV-DS

You will also find a new folder called custom-overlays which is necessary if you want to try creating your own custom overlays.

In that folder, you will find the all-important GRIT tool (freely released via the associated license file). I've also provided an example custom overlay file for Astrosmash. 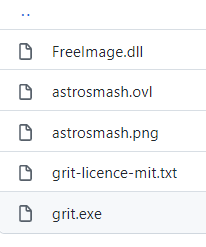 To create this astroshash.ovl file, you start with a .png file that is exactly 256x256 pixels. Only the top 192 pixels are available to display - the font for the main screen, file selection, configuration, etc. is below the 192 pixel mark. Don't touch that stuff unless you REALLY know what's going on 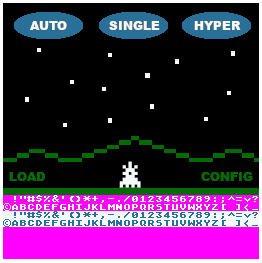 With that as your template, you can use GIMP to load this up and edit it as you like. It's only 256 colors so you will be limited - but that's enough to do some awesome things.

Once you have your overlay changed, save it back out exactly as it is.. 8-bit PNG (just use Gimp "Overwrite" from the file menu so nothing gets changed).

Then you must run the command line tool. Open a command prompt and run GRIT on the new graphic file as follows:

Now that will generate 2 files... astrosmash.s and astrosmash.h - only only need the .s file which will be renamed to .ovl

Open the new astrosmash.s (rename it to astrosmash.ovl at some point) and perform some edits on it.

Remove all the lines that aren't .tile, .pal or .map - in theory you could leave them in but they aren't processed.

While you're at it, the end of the big sections (.tile, .map and .pal) might not be fully padded to 8 entries... so if you see a line like this:

Now at the top of the file add your .ovl lines which map the keypad controller to X1,X2 and Y1, Y2 coordinates. You can get your coordinates for your custom buttons in GIMP - I usually go a little wider than the buttons so that they are easy to press with your thumb when playing. These .ovl lines must be in this exact order - KEY1 first, KEY2 next, etc. Do not change the order (but you can change the text to the extreme right as "comments").

In the end you should end up with a file that is formatted and laid out just like the example astrosmash.ovl - this is the only file that needs to be placed on your SD or Flash cart. It should be the same base filename as the game you are creating the overlay for (just with a .ovl extension instead of .int or .rom). In Configuration, select the overlay as "Custom".

Not trivial... I realize that. But it's workable and you can create as many custom overlays as you want. Once you get the hang of it, the above steps won't take more than 10 minutes.. the harder part will be creating the actual graphic. Once you have the .ovl file, that's all you need. You can put that .ovl on any of your systems and it will work. These manual steps above save me a ton of programming time - so don't complain too much
Last edited by wavemotion, Sep 15, 2021
Reactions: MORSHU8KRTXON, Indy13, VinsCool and 3 others 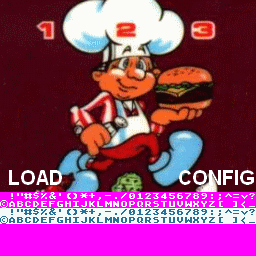 Reactions: RocketRobz, Indy13, banjo2 and 2 others

Homebrew ZXDS via SD Card on DSi (via TWL++ or Similar)?