One new edition of the GBAtemp book game club. Being a fairly long running series now we feel it best we cover the idea behind it all even if the name probably does that for us. In short each edition a game (or a related set of them) is selected and people that wish to play and discuss them can do so.
Our selections are not random but for the most part we do not wish to elaborate that much more than what follows.
We like a games enjoyable and that is certainly a desire for these selections but to an extent that can be overridden should a game showcase a nice mechanic, be an attempt a rare genre for the console it finds itself on, have a nice soundtrack (the bit trip games might be said to be somewhat simplistic but feature a great soundtrack although granted it is part of the game), be of some importance to the industry or something along those lines. We hope doing this means we do not make yet another score driven top ? games (by genre and/or system).
That being said we do try to note games if they had releases on other consoles but our main sources of games will be the commercial, rom hack and homebrew releases of the GBA, DS and Wii as well as any leaked betas, unreleased titles, unlicensed titles and such those consoles might have.
There are occasions where we will state another criteria such as release date within a console lifespan, titles that are now quite rare and hard to find, titles that missed being released in a big region (a while back we did a releases not seen in North America but that were seen in Europe- something of a switch up compared to earlier console generations) or something along those lines. Equally there might be occasions where we try for a compare and contrast for a selection or pose a challenge/run (what achievements/trophies were known as before someone cooked up that term).

Telegames have been around for a while and at first glance you could be forgiven for thinking they were just another shovelware company that got lucky. We at least hold that you would be wrong if for no other reason than the existence of their Ultimate ? games franchise. The games come in several forms but the ones we especially want to look at are the card and puzzle games which defy tradition and end up as fully featured games in the compilation format (as a rule of thumb compilation games of real world games, especially on handhelds, are rarely as diverse as dedicated versions of the same game). After over seven years of touchscreen we would not blame you for not wanting to go back to button controls exclusively but if you are looking for some GBA card games and "brain" games these are among the best.
After a very long wait (the company announced the DS version very near the DS launch) the DS version of ultimate card games released in November last year and was as well recieved as GBA franchise and telegames also have the likes of solitaire overload. Back on the GBA ultimate winter games did not age well (as indeed most GBA 3d sporting games did not) but ultimate arcade games and ultimate puzzle games are worth a look in as well. 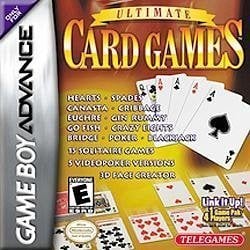 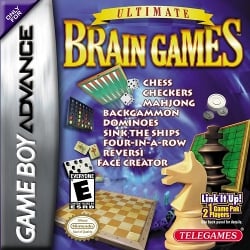 Another good example of not judging a book by the cover or more meaningless padding between pokemon reskinsleases?.If you are also on the hunt for GBA card games we are obligated to mention the homebrew title Herg's solitaire.[/p]

I've never even heard of this. I'm not going to play it but just want to say thanks for the effort, the things you wrote about all these games are pretty funny to read, I like it

i didn't know sw was going to be part of this?