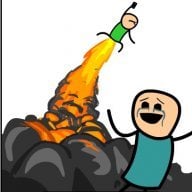 I should be getting my 3 in 1 in the mail soon and I am wondering how it works on the acekard. I heard that it has native support, but does that mean that it automatically patches the gba roms? would I need GBA Exploader?

the 3rd revision, dubbed the 3in1+, has some problems with akaio. anything flashed to nor will not boot to the gba mode. users will have to reboot the nds and select the pack as if it was a gba retail cart. the v1 and 2 of the 3in1 work fine, except there were some save corruption issues when backing the save up to the msd card, most of which seem to have been fixed by porting over the 3in1 code from the wood firmware. the new version of gba exploader has dldi issues on a number of flash kits and does not function correctly with akaio's dldi. if you don't have the "+" version then using an older copy of gba exploader should fix all of your problems. when you get your 3in1, insert it into the nds and run gba exploader. the application will say on the top which 3in1 you have.

remember that the 3in1 was never sold to be supported on anything other than ez flash products. at times you will have to be pro-active in figuring out a solution to your problem. all-in-all it works great for users who don't own a dedicated slot-2 flash kit.

@ AncientBoi: That is 1 city near me. Fuqin popo is outta hand all over the world. 8 minutes ago
Chat 2