This song has such a postive vibe to it, it just makes me happy whenever I hear it.
I also believe that this could potentially become the next "Touch It".

What happened with touch it?
Well, here's a short song history:

Then, at some awards show (dont remember which), Eminem came as a surprise guest, and added himself in.

Please, no rap=crap comments. It would make an asian child very sad.

Lol, not al lrap is bad, IMO. But like some of it I just like, don't even wanna know about it. But some are good. Like I thought that Fort Minor was good, and although Eminem's lyrics are kinda controversial, his voice and beat are good. But I still prefer like soft rock and stuff like that.
J

Yeah, some rap actually has meanings.

2Pac and Bone Thugs keep it real, though


Yeah, some rap actually has meanings.

2Pac and Bone Thugs keep it real, though

Yah, a lot of rap is like obscene. So many perverts out there, like I seriously think it should be censored to like stop kids from saying like "Smack that! And then supaMAN that hoe at the candy shop! Yoooouuuuu!!" And thanks for fixin' my spelling.

Its good, but its definatley no "Touch It Remix Part 2 - Busta Rhymes Feat. Mary J. Blige,Rah Digga & Missy Elliot"
I

Speak the Hungarian Rapper keeps it the most real though,

Now days for rap I don't really care about the lyrics much but if they are just horrible then no. As long as it has a good beat and sounds good then its good for me.
O

Psh who cares about the lyrics of a song as long as it sounds good? Most of all music involves sex and drugs anyway.

http://youtube.com/watch?v=mYZ_RD--Lpg
Nas- The World is Yours
T

QUOTE(oscarmejia @ Feb 25 2008 said:
Psh who cares about the lyrics of a song as long as it sounds good? Most of all music involves sex and drugs anyway.

http://youtube.com/watch?v=mYZ_RD--Lpg
Nas- The World is Yours
Click to expand...

illmatic=win! got the cd from fopp for £3

QUOTE(oscarmejia @ Feb 25 2008 said:
Psh who cares about the lyrics of a song as long as it sounds good? Most of all music involves sex and drugs anyway.

http://youtube.com/watch?v=mYZ_RD--Lpg
Nas- The World is Yours

illmatic=win! got the cd from fopp for £3

On topic: sounds ok.
I have a couple of songs that bring me up. Once I had a terrible crisis, after that I hand picked them, too bad my playlist was gone after formatting my PC, I'll have to look for them one of these days.

Touch It is one of the only rap songs I enjoy, just because its Busta! Other than that I hate rap (with the exception of very few).
S

I got New York City in the palm of my hand,
Now I could make a tight fist and let it crumble ridiculous
Or I could smack the world with a New York Nemesis

I love Brook Lynn.
Mary J. Blige should rap more under that name.

Okay, since this has exploded into some sort of hip-hop frenzy, I will now say everything about rap that I wish everyone could read.

Hip-Hop is not meaningless crap.
That has just been a stereotype coined by the vast population who prefer other genres of music.
Not all Hip-Hop is about shit like killing, sex, drugs, and money.
Rap has many, vast different levels.
There is the more poetic rap, with just a basic beat, telling a story, or experience.
Example: Don't Cry - Mims (Music is My Savior)
Then there is rap based on beats & sound, more for the purpose of a dance song. It has lyrics, but they can sometimes be found to be meaningless. This is usually what people think rap is all about, but that isn't true. This is the rap that is focused on by the media, which leads to the stereotype.
Example: Crank Dat - Soulja Boy (Souljaboytellem.com)
I'm sorry, did you say that this is the reason you hate Hip-Hop?
There's no meaning to it at all?
Rock is the only thing you like?
THEN WTF IS THIS?
People = Shit - Slipknot (Iowa)
Freestyle Rap is a Rap that is completely improvisional. The artist is given a beat, and the rapper talks about whatever comes to mind. Usually, this is done as an insult war between two people.
Example: Jin Freestyle Rap Battle
Then we can completely put rap aside, and turn to R&B, Rhythm & Blues.
Originally, this was just a Jazz song with vocals. However, this has taken a turn in modern music, and can mean a variety of things, since the genre of R&B is very broad. Ususally, today's R&B is mostly love songs.
Example: Roses - Outkast (Speakerboxx/The Love Below)

I want to say more, but I can't think of anything right now. >.
S

I hate that new souljaboy song with a passion.
S


Actually, I'm 15. And I prefer to be called English 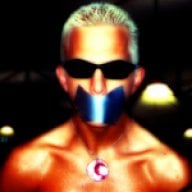 I think you misspelled the topic title? I cracked open my Websters Dictionary and could not find any reference to the word "Shawty"
S


Actually, I'm 15. And I prefer to be called English

I think you misspelled the topic title? I cracked open my Websters Dictionary and could not find any reference to the word "Shawty"
Click to expand...

Well, people can make up words.
D'oh got into the dictionary somehow.

Gaming The how to save game guide!