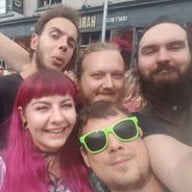 Hello all and hope you are well. I was hoping I could get some sort of answer to a problem I'm having with SDCafiine on a European Wii U (32gb). I am using a SanDisk Ultra SDHC (30mb r/w speed, 32kb cluster) with SDCafiine and a map pack by RetroBoy to change all tracks in MK8. It was working for the most part, seemed to freeze sometimes when loading one track after the other in a GP. However, I tried to load up what must have been the 17th and 18th track and they kept freezing on the loading screen, even when loading in singular race. Now, when I try to even load the tracks I got working before (with the same racer setups) the same thing is happening every time, so I can no longer play any custom tracks. I've been scratching my head as to how this could have happened as I don't think anything has changed. :/
Any help would be greatly appreciated as I was having a blast playing some of these mod tracks.

So, I guessed maybe the SD card was causing the freezing so I moved sdcafiine mods to a USB Flash drive and the tracks no longer freeze when loading, however when trying to do a GP I got a DSI Exception error. I believe this is probably to do with instantly loading one big track to another (as previously mentioned this happened sometimes on the first GPs with SD card) which is crashing the system due to how SDCafiine actually works.
So my solution is to continue loading mods with USB and only play via VS Race (loading back into the menu before loading another track seems to save the system from freezing). Guess I'll have to 3 star everything in vanilla again, never mind!
Last edited by jayofmaya, Mar 20, 2022

How to fix a broken system menu

@ UnreaLorenzo: Thanks mate, I need it.