One of my projects: Super Smash Bros. Ultimate Fighter karts for SuperTuxKart (STK) 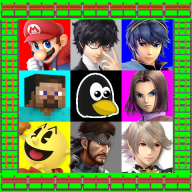 Since the release of Super Smash Bros. Ultimate back in December 2018, and the subsequent availability of the 3D game models found at https://mega.nz/#F!AAwWzCjT!Zd5kKpuQcE647DSRtpFShw, leading from https://www.vg-resource.com/thread-34836.html, I came up with the idea of porting all of the playable fighters to various 3D free/open-source (FOSS) games, as there currently doesn't exist any racing games following the spirit of Smash Bros. Unfortunately, school assignments in the months following from that time caused me to delay or postpone starting on many of these projects. However, one of these projects did get realized in that time since April 2019. It was made possible by some scripts I wrote to help import the data from SSBU, which can be found at https://gitlab.com/Worldblender/io_scene_numdlb. It will be described below (based from the README, read it and INSTALL for more information):

A collection of addon karts for use with free/open source (FOSS) racing game SuperTuxKart (https://supertuxkart.net/) based on the roster of Super Smash Bros. Ultimate (SSBU). 73 characters from that game will be included in this set, excluding the Mii Fighters as their customizability cannot be implemented in STK. Downloadable content (DLC) fighters will be included when their files are ripped, and they are made publicly available. A total of 74 karts are provided by this collection so far, excluding any Fighters Pass characters. This consists of all of the base fighters and the standalone DLC character Piranha Plant. The Pokémon Trainer him/herself is not present, but their three Pokémon are. Note that while I have tried to catch up with DLC characters, school work and the delays between DLC releases have made it hard for me to catch up. Likely starting in quarter 3 of 2020, I will have more time to come back to this project.
Each karts' directory is found under the original name that appears in the game data for SSBU, including any Japanese names used there. They are loaded in that order, but they use their international full names on the kart selection screen.

Screenshots (showing only Mario and Kirby, front + back):

Once I come back to this project, I will likely have more to come. To help me from having to do everything by myself, feel free to join in, and do give me feedback on the karts themselves.

Even though the karts could use improvements, such as more animations, I still like whatever I did make so far.

Gaming Super Smash Bros Ultimate: Kicks me out of Stage Select and brings me back to Rule select.

The next Super Smash Bros. Ultimate DLC fighter will be an ARMS character