MahJongg Wii
v0.7
MahJongg Wii is a very impressive looking homebrew game by JustWoody. The game looks nicer than most commercial games out there. 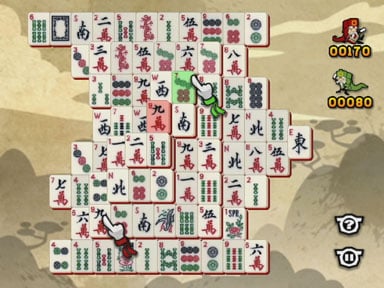 There are many features to be added in the future. This is a great game to keep your eye on.

* Changed to automatically select the language based on the Wii menu language settings (Nintendo only support Japanese, English, German, French, Spanish, Italian, Dutch) but as Mahjongg Wii supports more languages, I have kept the language selection screen, but moved it to be accessible via the game options screen
* Added three new tile layouts - fortress, crab and spider
* Changed placement algorithm to handle complexity of new tile layouts
* Added a layout selection screen which can be accessed by selecting change layout from options menu
* Changed all the backgrounds from png to jpeg and at same time doubled their resolution so they now look much cleaner
* Added hint functionality to the game (not hover hint) so that if it the icon is pressed a hint selection is highlighted in flashing yellow and 30 seconds are added to the time as a penalty
* Added Wiimote rumble when a tile pair is successfully selected
* Added an option to turn the rumble feature on or off
* Added the saving and loading of configuration data to SD card (mahjongg.cfg on root of SD)
* Added SDHC support
* Added Danish language support
* Wrote language selection paging - now with 9 languages per page with the plus and minus buttons (or on screen equivalents) used to move between them
* Added button B usage as an alternative back button whilst in the menus
* Added callback functions so that power and reset on the Wii now work and power button on the wiimote now turns the Wii off
* Fixed several bugs

* Added versus mode!
* Re-factored the tile selection processing and completed all coding around tile selection for both versus and coop modes
* Added option to restart the game when paused or no more moves left
* Added option to start a new game without going back to the menu when current game has finished
* Changed so that if only two tiles are left which are on top of each other the game finishes
* Fixed bug where tile placement algorithm gets stuck in an infinite loop when it cannot place all tiles successfully. Now if this occurs it finishes the shuffle and returns to no more moves mode
* Alternated which pointer is drawn first every frame to not give the advantage to player one in two player versus mode
* Added separate tile selections per player (this affects the co-op mode as well as the versus mode)
* Added Hungarian, Finish and Swedish languages

* Added multi-language support currently supporting English, French, Italian, Dutch, German, Spanish, Catalan, Japanese and Portuguese
* Wrote an algorithm to initialise the tiles so that tiles pairs are added in a selectable order
* Added a language selection menu including waving flags when hovering above them
* Allowed entering and exiting pause in game by pressing the plus button on the wiimote
* Allowed the type of game to be selectable by hovering over the pictures as well as the text
* Changed all selectable text so that they are selectable for the size of the text for the chosen language

* Added multiple tile layouts (four to start with) (re-wrote tile engine to handle this)
* Added shuffle option when no more tiles pairs left
* Added an icon and count of the number of available matching tiles during the game
* Made the non-selectable tiles slightly darker that the selectable ones so easier to see
* Added a gong sound to the start of the game
* Added new true type font for all non static text (tile layout names, time in game, etc)