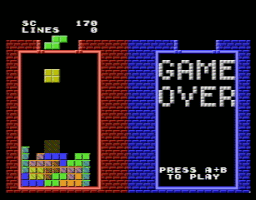 This block clone NES homebrew has been renamed and updated. Please see the change log for more information.

Change Log said:
• Renamed to LJ65 so that it can have its own domain.
• Reviewed which files to put under a permissive license and which to make GPLv3.
• BOTTOM isn't broken for player 2 anymore (reported by Kasumi).
• Scores ending in 00 aren't displayed as ending in 09.
• Hard drop gives one additional point so that it isn't weaker than soft drop (requested by Kasumi).
• Fixed strange interactions between one player's shifting and the other player's rotation, caused by sound code trashing X register (0.40 regression; reported by Matthew).
Click to expand...