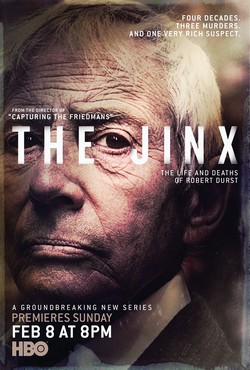 I was listening to the latest episode of the gaming podcast 'DLC' last week and on it they had Adam Sessler as a special guest. At the end of the show they always recommend something to the listeners, usually outside of gaming that they feel is worth checking out.
When they asked Adam, he said 'HBO's The Jinx'. Just watch one episode and you'll be hooked.
Usually I wouldn't take advice from the Sess, but I'm into anything from HBO so gave it a whirl.
The Jinx is a mini-series docu drama about a billionaire property developer from Manhattan who has seemingly gotten away with 3 murders. The series is only 6 episodes long with a total run time of about 240 mins - you could watch the whole thing in a day.
If this sounds interesting to you, or you like HBO's stuff, don't look it up or read anything about it (it has a 9.1 rating on imdb, looking it up in even google could spoil the whole thing for you), just watch it. It's gripping and the final episode was so chilling and worth the investment of the whole series.

Anyone seen it? If you do check it out let me know what you thought about it, it might feel a bit slow in the middle, but stick with it to the end. It's worth it.

I thought it was pretty eh myself >.>

My boss told me about it, said it was super amazing and awesome and I figured I'd just binge watch the 6 episodes. I did that and maybe 2 of the episodes were kind of interesting I guess? I dunno, maybe documentaries just aren't my thing or something, but this was just uninteresting as whole.


The part where he didn't know about the mic being live made me laugh, both times it happened . But everything else was meh

Wow really surprised at that. I found the ending to be such great television. Without spoiling anything, in the last minutes the guy basically
became Golum. So creepy. The way 30 years of ducking and diving all came down to one word spelt incorrectly, it was incredible work by the documentary team. He got arrested the day before the final episode aired.