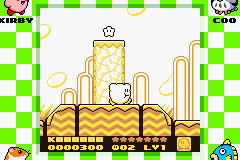 A quick update to the recently released new version of Goomba Color, featuring some fixes for Super Gameboy games. Download and changelog below.

Where'd everyone go? That last update's thread on it had some replies.

Nice game to use as an example.

An example of the update: Zelda Link's Awakening now shows both GBC colors and the Super Gameboy border, whereas in the past you could only get one or the other but not both.

Isn't it true Pokemon Crystal still has the SGB border code, but most emulators can't display that since it's not in the header or something?

Update: Indeed. Here is a tidbit of info.

If you're referring to this:

From my understanding, the previous beta versions supported only the first mode to get both GBC colors and SGB borders working, which only worked for some games, while this latest version works with the second method as well. My conjecture for this is based on the following quote by Dwedit on PocketHeaven that he made about a day before this latest release: Next release will be able to add SGB borders to SGB/GBC games.

How does it work?Â It checks if the game supports both GBC and SGB mode, then runs it in SGB mode for about 1 second until the game adds its border, then reboots in GBC mode.Â Some games don't like this, because they only add the border after you begin the game.Â Those games won't get a border.

When it's running in SGB "border add mode" for ~1 second, the game is disallowed access to the save ram.Â This is because games like Conker's Pocket Tales and Warioland 2 offer to delete your save game if you boot them in a regular gameboy and a color gameboy save exists.Â So all the games see a blank save for that 1 second, then load the normal save as it reboots in GBC mode.
Click to expand...

I haven't tested Crystal, so I don't know for sure if it works in this latest version or not.

Hm... Not that it's important, as US Crystal just has the same border as Japanese Gold. And it has graphical issues with Goomba Color unlike Gold/Silver.