This is a new handheld console from Game Consoles Worldwide. The site's not finished but all the main info's there. There's a few videos after the specs on the first page. It looks like it's going to be awesome! I've already preordered one. You get double the memory and 4X the storage for preordering and access to a sneak peek section on the site. 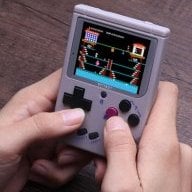 i think it is better than dingo and other retro hand hand as you can compare its specifications to others. it seems like that they are made from peoples demand. I am also looking forward to it.

This will be my second open handheld after the Wiz. That kinda sucked cause it didn't get much support from developers cause the Pandora was kind of new. This one seems to be gaining a following now so, I think it'll be great. It's fairly powerful and has a good sized screen for what it's being made for. The controls and case look like they're well made and they're going to put some better speakers in it. This guy that's over the production of this has really listened to the community and I think it's showing. He says they're working on N64 for it but, I really wouldn't care if it never happens. It looks like it's gonna end up playing PSX and lower at full speed and that's exactly what I want. A lot of those other handhelds can't claim that and the ones that can are just too big or don't even have fully functioning controls.