GBAtemp book game club is sporting a fancy new hat and to celebrate it has a new entry. Go go series overview- in this series a game of a handful of related ones are put forth as suggestions for all that wish to participate to play and later discuss that playthrough or another.
Our selection process is going to be kept fairly under wraps but we do wish each selection will be enjoyable to someone that already likes the genre/playstyle. There will be occasions were we have an extra criteria like available for next to nothing today or not published in North America but are available in Europe (we had a run of them not so long ago) or maybe posing a certain challenge/run instead (what people used to do before achievements took the concept and gave it a name).
Of course just looking at overall quality just leads to a review score/top ? games of a genre and platform list which has been done to death and there are many games that fell short of true greatness but explored something interesting along the way or demonstrated a nice aspect (which are more than welcome to pull up for further discussion).
We are not explicitly limiting ourselves to any consoles but most of what appears in the series will be for the GBA, DS and Wii but as each has extensive and often growing libraries of commercial release, rom hacks, homebrew code and things like leaked beta versions there is still a lot to look at.

Some people have taken to bashing various consoles for an abundance of what has been dubbed shovelware with certain titles that do not need to get tarred with that brush being caught in the crossfire (this would be an example). Now although rarely stated it is a goal of this series and others like it to get people to look at things they might not, consider how they are put together and to ultimately delve deeper into things and as such one of the many things that helps with that is to know a magic trick or two (not to mention we hold everybody should know a couple of magic tricks in general). The original game itself does come with a deck of cards but you can still do things without one and use a standard one for many tricks as well. The game does have a somewhat annoying daily limit for unlocking going on but there is a cheat if you want it and those wandering in expecting a kind of glossary or magic trick encyclopaedia will probably find gripes but others should have a good time.

Video of the a random trick (several more are available)
[/p] 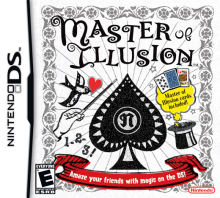 No GBAtemp Game of the week/retro reviews desk that really is shovelware or an amusing example of the DS not just being for games?[/p]

@ Psionic Roshambo: On the Wii I think you use a different loader? 26 minutes ago
Chat 1