So I have recently just finished Final Fantasy 13 after god knows how long, and I must say that the way the game wrapped up would have had me happy without a sequel since I thought the story kind of closed up well.. But anyway, knowing that there was a sequel out there I just had to try it out.

One thing I have noticed on the internet in general at the moment is a lack of people who are actually providing their thoughts on the game, and instead jump straight into a flame-war by either harping on about their dislike for 13/Square Enix/FF/Noel & Serah + Monster/DLC and so on so forth. I don't see many people who actually express their thoughts, except when they are masking the opinions of IGN and trying to take them as their own >.
A

More endings, depending what you done on the game. At least there's a reason you play the game multiple times.

There is a DLC, yeah at least it is.

More endings, depending what you done on the game. At least there's a reason you play the game multiple times.

There is a DLC, yeah at least it is.

Agreed. I think that might be why I find the game so easy.. I recently got the Growth Egg on FF13 using the death spam method, so he challenge level was quite high lol. I am looking forward to seeing what the other endings are like.. Chrono triggers multiple endings were fun to get, even though alot of them were quite quirky..

Moved the thread to the General Gaming section as FFXIII-2 isn't exclusive to the PS3. Anyway...

I've only played the demo and it seems like 'more of the same' which is exactly what I want. I absolutely loved the first game and never quite understood why it was so disliked. The QTE's might take a bit of getting used to as my reactions aren't what they used to be. Hopefully I'll be playing the full version in the next week or three.

In other news - I finally earned Platinum trophy on FFXIII a couple of days ago. Go me! 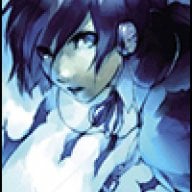 I loved Final Fantasy XIII-2 (and Final Fantasy XIII). Somehow, the battle system never gives me that burned out feeling after playing for a long time... hell, I replayed FFXIII 11 days before XIII-2 came out and finished it in 7. I've had my Platinum trophy in XIII-2 since the 9th. The story in XIII-2 definitely takes a back seat to the first but the ability to take on so many side areas and optional quests makes it a lot of fun to explore and battle. That said, the game really is too easy. I got the Fair Fighter trophy without even realizing I was fighting the superboss that it was associated with because it was a pushover.

I enjoyed the soundtrack and its vocal pop pieces as well. I don't have a problem with Crazy Chocobo like a lot of people do because I understand the intention behind its inclusion. My only complaints are that I wish the main storyline was longer... and those DAMN 'HANDS OF TIME' TEMPORAL RIFT PUZZLES.

I got my copy for $40 since Amazon kicked back $20 in store credit when they shipped the game out. If you really liked FFXIII, $60 is no problem to part with for this game (but be aware that DLC will suck more of your cash if you so desire). I wish someone would hit me in the head with a hammer so I could get amnesia and enjoy the game all over again.

Ending sucked, All those extra endings are just fun to find out, but nothing that would satisfy you. I have to go to the store too and buy more PSN cash to buy the new DLC too =.=. The gameplay however is way more fun than XIII. The worst part is getting all those fragments... Well not that their hard to begin with,,, just time consuming.

The ending and story as a whole, is a joke when compared to XIII. I guess Square was right that they couldn't do a story like XIII without it being linear.

I didn't care at all for Serah or Noel. I liked Caius, I think he is a great antagonist and I secretly hope Chocolina appears in other Final Fantasy games but apart from that, it's pretty safe to say it's my most hated FF game.

With that being said, I will still buy -3. I love Lightning and the original XIII cast (even though he didn't see much of them in -2), I just hope Square keeps Serah dead.
X

Only problem is that it's WAY too easy. It actually gets easier as the game goes on too

xakota said:
Only problem is that it's WAY too easy. It actually gets easier as the game goes on too
Click to expand...

I think the game is only easy because we are accustomed to the battle system, the last boss though was hard and unforgivable.

I'm glad they were able to fix all the bugs from 13-1. And also manage to make the graphics look good without entering the uncanny valley.

xakota said:
Only problem is that it's WAY too easy. It actually gets easier as the game goes on too
Click to expand...

I think the game is only easy because we are accustomed to the battle system, the last boss though was hard and unforgivable.
Click to expand...

EDIT: And it was on my second try after i found out that he actually hits and died by accident when i finally saw him do some nuke.

DarkStriker said:
Hard? I took him down on one stagger and finished the fight in 3 minutes and 43 seconds. Very hard... VERY HARD.......

EDIT: And it was on my second try after i found out that he actually hits and died by accident when i finally saw him do some nuke.
Click to expand...

im not talking about caius

Caius? I thought you meant those 3 bahamuts. And yeah. Im like that. Once i can do it, i brag about it The only boss fight in the game i never got 5 stars on first try was the fight in academia 400 with those tentacle.

BRING BACK SERAH FARRON. booo prowler she didnt deserve to die. But then doesnt everyone die? Valhalla sucks up the world as noel and hope watch.
Reactions: EZ-Megaman

Final Fantasy XVI will be exclusive to PS5 for six months

@ UnpredictableEnigma: imagine having to moderate the dating section.....but i guess some would be more eager than... A moment ago
Chat 5