Before you start raging at me, let me clarify a few things. Yes, I have searched the forums regarding this topic. I have done some googling. I just want to make sure I have gotten all the facts straight. And I didn't want to threadjack or necro any of the existing topics. Only had experience with Slot-1 carts so I am a bit unsure about many things still so please bear with me.

Ok, basically here is a list of things which are a must in the chosen cart:
This is what I took into consideration:asd2. Stores multiple games at a time.asd3. Hassle-free Pal Park-ingasd4. *EITHER fits perfectly in DSLite OR able to be used in GBAOther things to consider:Yea so that is basically all I can think of at the moment. I really want to hear your opinions. Currently I am in favouring the EZ4 for its multigame storage, and possible usage of miniSD for saves though I am a bit cautious due to the possible need for additional equipment to be able to run it on the DS (at least that was the case years back). Thanks in advance

Kudos on the nice layout, afraid I will probably not return the favour

GBA linkup... if it is just a matter of having the GBA game there the EZ4 and EZ3 will be fine for most things. The trouble comes when saves have to be there as all known GBA carts that can do it use SRAM and there was flash and EEPROM as well- in the case of pal park there is http://filetrip.net/f27240-Pokepatch-4-2.html and at least the basics of megaman work with the EZ4 linkup abilities (it was added in a later version of the program and via a series of steps* you can have it appear as a rom) but pokemon was the only one with anything done on the SRAM front as far as I know. I guess it would not be that hard to port something over if something else required saves and you can also use an emulator (desmume has some options here).

"AFAIK ALL of them store the sav file within the internal battery even for the EZ4 and there is no known way to store it in the miniSD and execute it from there a la current Slot-1 carts"
Technically yes but it does not matter- the EZ4 writes to the SRAM as it is easier than writing to SD cards all in hardware right away and then immediately after booting up it writes it back to the miniSD card so if your battery is a bit suspect you can power cycle it (SRAM lasts for several seconds after power is lost) and it should be good and going further you might even be able to soft reset back to the loader without the need to power off (EZ4 soft reset is a deep magic although it can be done).
Batteries are not that hard to source and replace these days either.

Yeah the 3 in 1 only has one game at a time- multirom on NOR is a pain to implement and to my knowledge outside of some earlier EZ5 betas nobody ever did it (not to mention it was going to be unwieldy but I will spare that conversation and instead link http://ezflash.sosuke.com/viewtopic.php?f=16&t=12903 if you are curious) and it is easier to just kick it all to the DS/loader software (the EZ4 does have multirom on NOR mind). You have to remember any support for the 3 in 1 is down to the cart/program doing it so pal park is required by everything save for some of the EZ5 loaders (not sure it got added back in after the rewrite/3.0 jump) and maybe AKAIO, pal park is not a hard thing to add though. 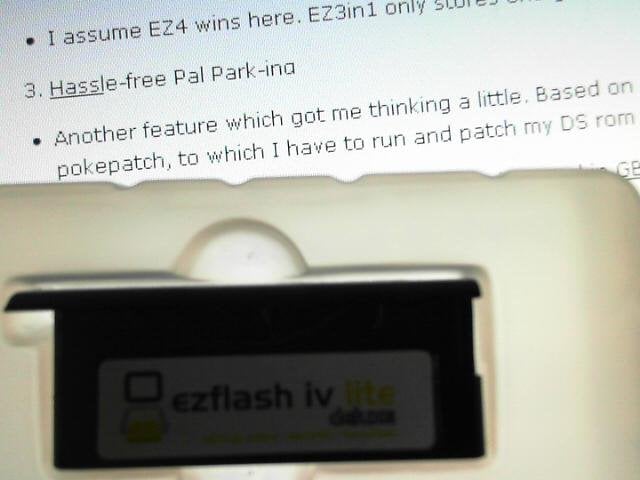 They are however quite rare these days and you will have to look quite hard or open your wallet to find them- the site I grabbed mine from last year ( http://www.neoconsolas.com ) was selling them off cheap but they have gone now which was a pity
http://shop.01media.com/info.asp?ProductID=33290 still has them and is the only place I know of that still has them. The site is a former partner of GBAtemp and respected well enough- to save you looking it up the price there is just shy of 60 USD although to be fair they are probably the second most desirable GBA flash cart after the old EZ3 (not 3 in 1 which more accurately is named the EZ5 3 in 1 expansion pack) and if not the definitely third after some of the M3 GBA flash carts).

DS stuff- if you just want GBA running there is no need for anything extra on the DS. If you want it to do something like the GBA-DS linkup that is not pal park that will require flashme ( http://home.comcast.net/~olimar/flashme/ ) or a nopass. I do not know if many modern DS slot carts retain nopass functionality (I think it clashes with some of the DSi/3ds compatibility and nobody really cared to have it back anyway) although that lite deluxe should come with one and again flashme (it gets rid of the health and safety screen if you want so why not) and/or emulators (most linkups are once, press unlock and done so more than capable of having an emulator do the deed).

I think that is everything.

*from the changelog
2006-09-21
EZ4Client datecode 20060921 Version1.01 Click to download
Compatibility updated to 0568
Add Link with GBA game function ( works with EZ4,EZ4Lite,EZ4LiteDeluxe, EZ4LiteCompact not supported yet because GBA function removed)
operation step sample.
1. Write the GBA game which you wanna to link to minisD/microSD with EZ4Client (for exsample: 0140_-_Gyakuten_Saiban_(J).gba)
2. Write the NDS game which correspond the GBA game to miniSD/microSD with EZ4Client, option " Link with GBA game" must be checked. ( for exsample:0186 - Gyakuten Saiban - Yomigaeru Gyakuten (JP) (M2).zip)
3. Enter the GBA mode, format 256M/384M Norflash by press Start then A.
4. Enter the SD card in GBA mode, choose the GBA game which you want to link, press Select then A, wait the write procedure finish.
5. Restart DS in to NDS mode and excute the NDS game. if the link works, you can free choose any chapter at the beginning.
Point: 1. NDS game which need to link must check the "Link with GBA game" option. 2. the GBA game which need to link must be wroten on the first position of 256M/384M norflash.
Reactions: 1 person

I hope this doesn't count as double posting. Didn't want to merge it with the 1st post or else it may end up a little bit messy.

Anyway, thanks FAST6191 for the quick and awesome reply.

Funny thing. Right after I posted, I went to do a bit more googling and stumbled upon the EZ4lite and its variants. True story. For some reason all those pages eluded me prior to that. Hahaha. Backtracked GBATemp's reviews and saw them (and edited my post soon after).

After thinking about it, I suppose I will just stick to doing things on the Desmume for now. Far simpler and cheaper though I definitely will miss that nostalgic feeling of playing on a console. I have to say my OCD is tempting me to get the Deluxe.... Will wait and see

Thanks again for your help. If only we can give +1s to forummers XD

the LINK TO GBA game feature didn't work for me on Pokemon games for some reason.

Rudolph released a tool which patches a Pokemon Platinum rom and looks for a compatible Pokemon GBA game writen in NOR (be it EZ3in1 or EZIV), but you must run this patched dump from a slot1 card to use the GBA slot.

Also for some reason, I feel the EZIV more "special" than 3in1, it may just be me. (GBA games runs the same on both cards, except the save handling on 3in1 must be used through a SLOT1 card, instead the EZIV Client for windows/mac where the saves depend on a updated save/rom list)

Nintendo DS Monday at 6:49 AM
M4x1mumReZ