Dirt.Showdown.XBOX360-COMPLEX
Region free by the looks of things

Amazon words
DiRT Showdown is the new arcade racing game from the team that brought you the award-winning DiRT series, uncaged in 2012. Pick up and play controls combine with electrifying events, frenzied crowds and stunning graphics to deliver high octane, dive in and drive thrills from event one.

DiRT Showdown is the new arcade racing game from the team that brought you the award-winning DiRT series, uncaged in 2012. Pick up and play controls combine with electrifying events, frenzied crowds and stunning graphics to deliver high octane, dive in and drive thrills from event one.

NO HOLDS BARRED RACING EVENTS - Trade paint and use nitrous to blast past rivals in DiRT Showdown's racing modes. Courses are littered with obstacles, pinch points, multiple-routes and ramps to deliver adrenaline-fuelled racing across spectacular courses.
BONE CRUNCHING DEMOLITION DERBY EVENTS - Crash, smash and bash your way through a range of demolition derby events, pushing our stunning damage engine to its spectacular limits. 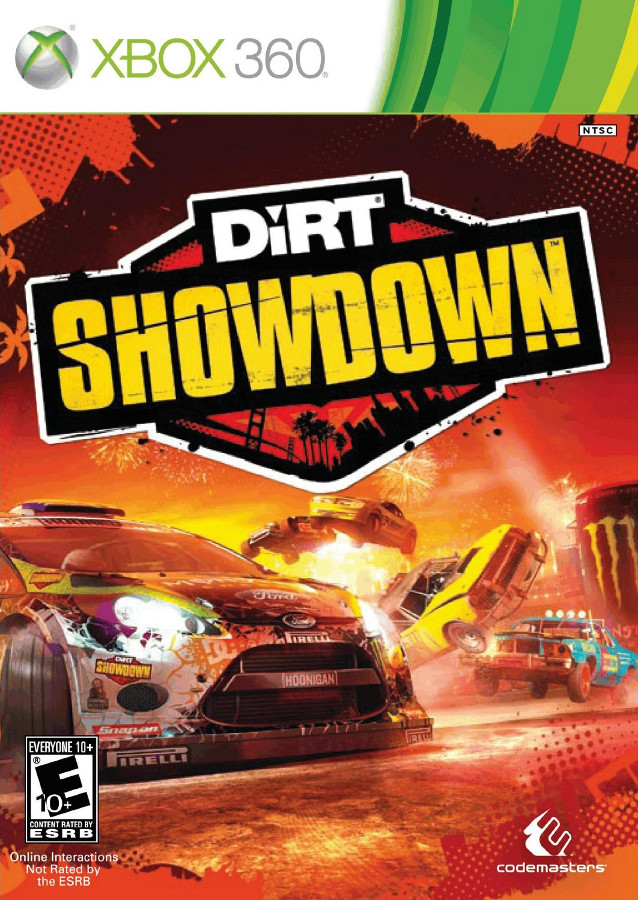 DiRT Showdown is a brand new dive in and drive adrenaline rush of
speed, style and destruction from the creators of the multi-award
winning DiRT series. Players jump into a new world of arcade racing
with pick up and play controls, speeding, tricking and smashing their
way to `Showdown' finals to compete against rivals in front of
thousands of fans in a vibrant festival atmosphere.

There are three broad categories to DiRT Showdown's stunning world of
action-sport racing. Players will use nitrous to blast past rivals and
negotiate courses filled with ramps, multiple routes and obstacles in
racing events. Gaming's most advanced damage engine is pushed to its
limits in demolition derby events, where players smash and crash their
way to victory in jaw-dropping, bone-jarring style. Finally, in
Hoonigan events gamers can demonstrate their freestyle driving skill in
huge free-roaming stunt parks with new accessible controls.

DiRT Showdown is Codemasters' most connected game ever - split-screen
multiplayer, eight player online racing, on and off-line quick-fire
party games, and YouTube integration all come as standard. Players can
also issue new `Showdown Challenges' to compete with friends in on and
off-line modes.

In the career mode, globe-trotting Showdown players will travel from
Miami to San Francisco, London to Tokyo and other famous locations
earning the adulation of the crowd at hyper-energised, frenzied,
unsanctioned race events. Over 50 different events across four
championships challenge gamers in a variety of conditions - sun, snow,
and rain - through the day and under the floodlights at night.

With an exciting mix of licensed and bespoke cars and powered by the
EGO Game Technology Platform for phenomenal graphical performance and
stunning damage, DiRT Showdown will be the new standard for arcade
driving delirium.

@ AncientBoi: scheduled to arrive in about 5 days 10 minutes ago
Chat 1