Chief Editor
GBAtemp Patron
May 20, 2021 at 11:45 PM
7,650 69 16
Gears of War, a series known for its exclusivity to Xbox consoles, was once in development for a Sony system. A prototype build of Gears of War 3 for the PlayStation 3 has been uploaded by its owner to the internet, preserving the unreleased game. PixelButts, the one behind the "leak" described the beta as a demo build that Epic Games was working on in order to test how the engine ran on the PS3. The build was created exactly 10 years ago, in May 2011, but remained unusable and unplayable until last year. According to the Archive.org post, the game will not run on anything except specifically devkit PS3s, as they have extra RAM that helps the game to run. Currently, PS3 emulator RPCS3 does boot the game, but cannot get past the title screen. While the public release of the prototype is new, gameplay footage has previously been documented running on a devkit, and can been seen in the video linked above.

This is an archive of the original data built by Epic Games on May 19 2011 for Gears of War 3 for PS3 systems. Originally created during an engine test, and leaked 10 years ago and remained unusable data while circulating between collectors and exchanging hands. I was the first person to get this data working 9 years later, and decided now that it's time to release it on the 10th anniversary of this build being made (May 19 2021). To date, this is the only Epic-made data for a PS3 version of the game, as all others have been made with leaked source code.
Click to expand...

It's the 10th anniversary of the Gears of War 3 PS3 data being built, so to celebrate I'm releasing it.
I no longer plan to release prototype game stuff after this, as this was the last one I was sitting on.https://t.co/Tg5TS1mzN2

I would agree that the launch xenon 360s are shit, but so are the launch ps3s. I wouldn't use either.
D

HylianBran said:
Why do you say that? I'd really appreciate if Microsoft stopped making consoles so all of their games could be on better consoles. That sounds like a completely reasonable thing to want.
Click to expand...

I'd really appreciate if more gamers took gaming seriously enough to save up and have all consoles and also a PC so we could stop fanboy flame wars.

that said thats a blanket statement that doesnt hold up.

the PS2 was weaker than the XBOX and even the GC, so it was the worse console, but that goes to show you popularity doesnt equal what is the better console.

the 360 was theoretically on paper weaker than the PS3 on a properly implemented optimized game, but most 1st party games were not that, let alone 3rd party.
so in practice the 360 was stronger and on multi-platform games with rare exception ran better and had higher resolutions of outputted graphics.

the PS4 was stronger than the xbox one and was most popular, then the ps4 Pro and one X came out and the one X was by a order of magnitude more powerful than either PS4 variant./
so once again for the majority of that life cycle the "better" console was not the most powerful.

seems evidence shows little correlation to best vs popular and regardless they tend to leapfrog each other.
if its not power or popularity that makes you determine the "better consoles" your only complaint is probably controller feel, in which case get a TITAN2 or cronus and use whatever controller you want with everything.
Last edited by dude1, May 23, 2021

godreborn said:
I would agree that the launch xenon 360s are shit, but so are the launch ps3s. I wouldn't use either.
Click to expand...

But you need a launch ps3 to have cfw, and have bc.

At present, while I do have an early enough slim ps3 that works nad is on CFW, I sorely miss the added functionality. With the BC ps3, with CFW, you could insert a backup ps1 or 2 disc and it shows up like a genuine disc.

cfw is installable up to some 2500 systems, so slims can install cfw. I have a slim with cfw on it in fact. it's a 2500 system.
Reactions: HollowGrams 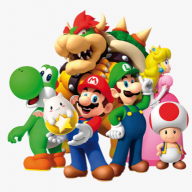 godreborn said:
cfw is installable up to some 2500 systems, so slims can install cfw. I have a slim with cfw on it in fact. it's a 2500 system.
Click to expand...

Yes sir, CECH2501B with date code of april or before (Tiny print on bottom plate) were all CFW'able for me.
Reactions: godreborn

godreborn said:
cfw is installable up to some 2500 systems, so slims can install cfw. I have a slim with cfw on it in fact. it's a 2500 system.
Click to expand...

Still frustrating that it seems like either efforts just stopped for anything after.

Then again, I'm still stuck with a Mariko Switch, because idiots now want to charge as much as an effing RTX 3080 for a "hackable" switch.

I don't know much about the switch, but if you mean why there's no cfw for ps3's afterwards, it's because we don't know the metldr 2 key. sony really messed up with early systems. the ECDSA, which is the ps3's security -- its algorithm is known, and there are supposed to be two unknowns to make the equation unsolvable. however, sony only left one as unknown, so all private keys were solvable. it took a hardware revision to fix the problem. they also have lv0.2, which I think is a hash of lv0 in case anyone were to try to mess with it.

I don't know how the system knows what one of the unknowns is, but I think there's a messenger that's included with firmware, which probably uses some unknown equation. that would be my guess. I know the messenger is how it figures it out, so I assume it's behind some complicated equation.

Codemastershock said:
right but not really. The 360 has one shared pool of memory (512MB) that can be dynamically allocated between video and game memory, PS3 has fixed 256MB for VRAM and 256MB of RAM (which is not fully available since there are system processes) for everything else. Both of them do reserve some memory for system operations, but since the console have limited multitasking capabilities, the system dont require as much memory as recent consoles or other devices such as PCs and smartphones.
Click to expand...

They also really tried releasing the PS3 without a GPU, that's why its launch was delayed a year

Prototypes are always fun to mess around with and discover possibly new stuff.
J

Nothing to say other than HI! I need to take part in 5 discussions before I can ask a question. This is finally 5. Stupid rules!

@ Psionic Roshambo: "Sometimes he would have Alfred watch..." Lol 3 minutes ago
Chat 5