I can't seem to get this to work with my emunand. it shows the opening movie, then black screens. I have neek installed, but how long does it take for it to return to the main menu? I might have around 1,000 wads installed on my emunand -- could that be the problem?

the more games it has to list, the longer it takes.

what happens if you have neek (in the sneek folder) on both the sd card and the usb? does one override the other? does neek automatically use the emunand you have set up in options? I've gotten into neek before, and yeah, I think it took a while with an emunand that's maybe 200-300GBs. is there a way to determine if I'm using neek or neek2o? I think I'm using the latter, but I"m not sure. I remember neek sending me back to the wii home menu, and there were several items on there that I didn't have on my real home menu. how do you access the game then? or, does the system automatically boot the game when selected in usb loader gx? should I try booting into neek via settings or via the game itself? I hope this makes sense.

it also depends if it's neek and neek2o
neek works only with dump on root.
if you have your dump in a folder (nand/ ? or nands/01/ ?) then it's neek2o

once you access the neek system menu with all your games on it, press 1 or 2 on the wiimote to access the "game launch menu", and choose the game from here.
if you want autoboot, then neek2o is compatible with it, just boot the game from USBLoaderGX with the emuNAND option set to "neek" instead of "full" it will skip the system menu. it might still take a while to load because it's probably listing all games too, even if not loading sysmenu.
Last edited by Cyan, Aug 9, 2019

is it possible to create a separate nand dump just for neek games or does the neek game have to be part of that NAND dump?

here's what my sneek folder looks like on usb: 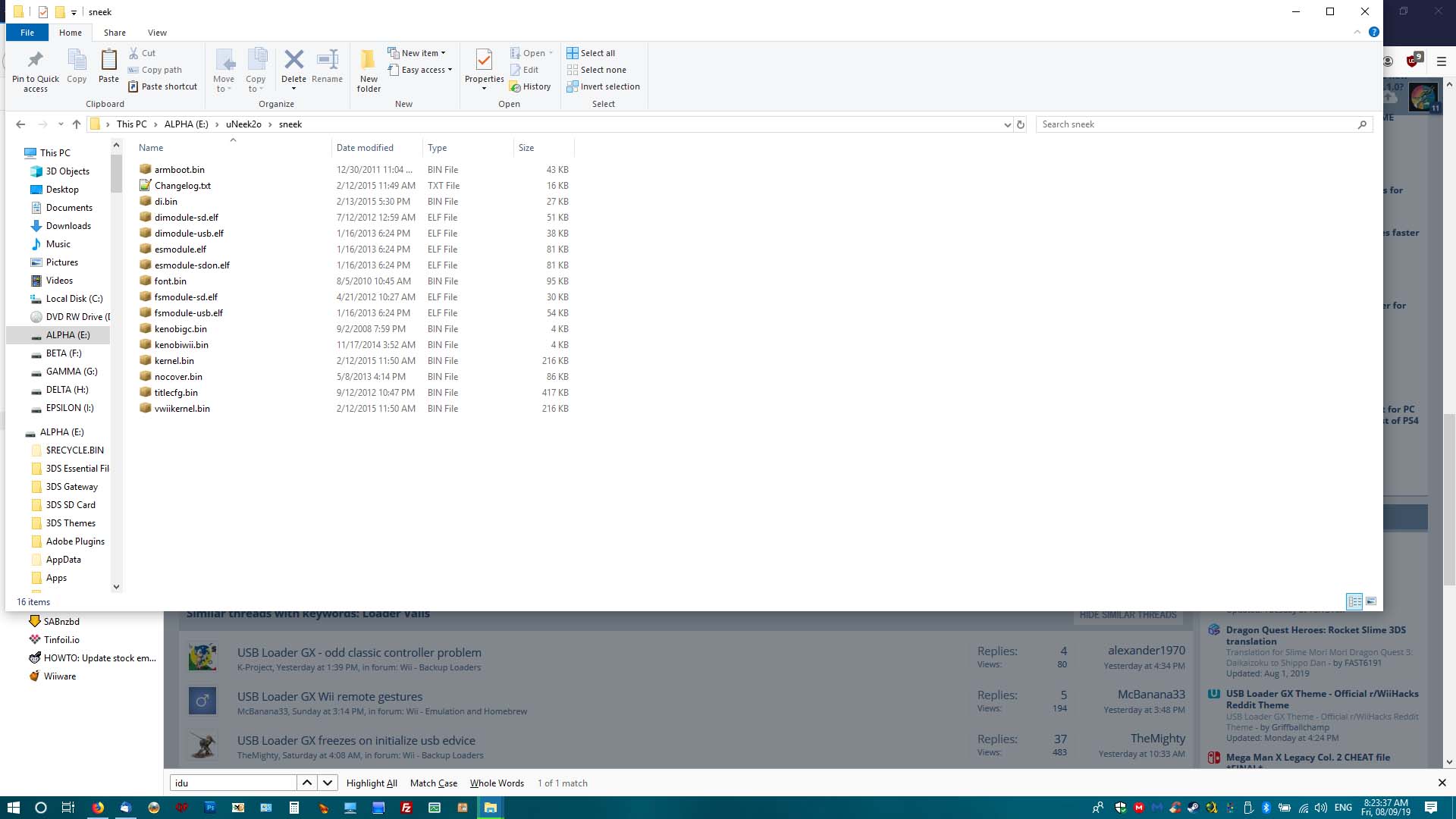 the controller shuts off when I select the game and neek. and, it never does anything.
Last edited by godreborn, Aug 9, 2019

you have way too much files in that folder.
the files you have here are used to compile need, using a "neek builder" to get the final "kernel.bin" and "armboot.bin" files.


I'm not sure where you got all the files, but it's a mix of different versions.
usually, neek is released in "compilable" form, because releasing the final files contains an IOS module which is copyrighted by nintendo.
there's no non-compiled file for vWii, it was never released. instead, there is a leak of already built vWii kernel.bin, which apparently you have in the same folder than "old non built non vWii" version.
your folder is a mess


what you need on vWii :

note1 : there's no leak for vwiikernel for sneek, only for uneek. you need to use USB !


Note 2 : if you use your USB for Wii neek too, you can have "kernel.bin" in that folder too, but be sure it's the wii version and not the vWii version renamed to kernel ! and if it's for Wii, be sure it's not "Sneek" version but really "Uneek" version for USB !
really, the best way is to re-generate files and tag them correctly, using old random files merged into a single folder is prone to problem.
vWii and Wii emuNAND dumps are not compatible with each other, you'll have to use different path settings in usbgx ! don't attemps if you are a n00b, even if you are a noob, even if you are a newbie. please, don't attempt at all unless you understand what you are doing and why.


That's all !
you need only 2 files!
Delete any other files, like "nandcfg.bin" if found. it'll be recreated correctly by the loader and neek automatically.
it can store up to 8 different neek path, to "swapp" on the fly. but it's unstable, don't bother trying it


additional files, but shouldn't be on your folder until AFTER you verified that neek is working and booting.
usb:/sneek/kenobiwii.bin (if you ever want to use cheatcodes, but don't until you really need to)
usb:/sneek/di.bin (if you ever want to launch wbfs games, it's the "disc interface" redirection module) again, do not add it unless needed and only AFTER you make sure neek works fine without it. it's the main cause of non working neek setup.
no more reason to use kenobigc, it was needed when using neek as gateway for DIOS MIOS/Quad gamecube mode.

Now, about your emuNAND path :
neek2o has a pseudo bug where it requires the path to be in 2 folders hierarchy ! (2 sub folders from root)
usb:/nand/ <-- not working correctly
usb:/nands/01/ <-- very good
usb:/nands/pl_us/ <-- even better (no idea why "Post Loader" folders are kind of used as default path), could be pl_eu and pl_jp as alternative nands.

Yes, you can put specific games in separated emuNAND path to load faster !
and even to prevent messing with the system files used by neek, and prevent corrupting emunand and neek compatibility, you did good to think about that feature !

1. make your full emuNAND dump. when I say "full" I mean the one "full of games". fill it with ALL the games you want, both neek and non neek. this is the one which will be "seen" by the loader interface so you'll see your "full" game collection without the need to change the path in the settings every thing.
usb:/nands/main/ <-- good idea for a path.
usb:/nands/full/
usb:/nands/US/
etc.
choose the path which feels more natural to your current usage. please, don't be too long, and don't use space in the path !

2. make a second NAND dump.
go to loader custom path menu, change emuNAND channel path to :
usb:/nands/neek2o/
go to features menu, make a full dump to this new path !
go to wad manager, add your "non working" wads to that path.
go to wad manager, add the "NK2O" channel (nswitch, or neek) used to automatically "return to realNAND" at game exit.
go to features, launch neek sysmenu, be sure it boots and works fine with the added games.
don't forget to do that : hidden menu (1 or 2 on wiimote) > enable region free !

3.
once done and both your emuNAND are setup and working, go back to usbgx, settings, custom path, set the "main" emuNAND back as default path seen by the loader.

choose which path to use for each game :
select your game in usbgx
go to option, emuNAND path : select the nands/neek2o/ path for games not working with cIOS, and set the emuNAND mode to "neek", and chose whether you want to exit neek and return to realNAND at game exit (return to : enabled). if you choose "disable" you'll be back to neek's sysmenu when you exit a game launched using autoboot. it'll not return to real NAND, and will not return to USBGX either. if you want to return to usbgx, set your console to autoboot to usbgx (priiloader or boot2)

save the individual game settings.

neek is working, your games too ? using autoboot?
you separated both nands?
glad all worked correctly

it's long to explain, I type the same thing again and again too much over the years, but I prefer explaining so people understand, instead of just small guide with 2 step.
but at the end, it's not very hard or long what you have to do.
make a new dump, add games, change game settings to use different path between global/individual settings
you just have to install the game in BOTH paths to make it simpler and don't have to switch global path every time, but it's not a requirement if changing the global path doesn't bother you.
Last edited by Cyan, Aug 9, 2019

it doesn't seem to work when I have injected valis 2 into my original vwii nand, then use neek2o nand. it says the system files are corrupted, maybe because it's on a separate nand? however, I select one nand, the other won't be read and the games won't show up. changing nands manually in settings works though. autoboot also works, except it restarts the system when I exit out. maybe I don't understand that part of it.

that looks fine to me and logical.
except for the "system file corrupted" part.

so let's start with that:
how big is your USB partition? if bigger than 2TB, some games detects the "free remaining blocs" as negative and thing you don't have enough space left to create the savegame.
2 solution : use SD (not possible on vWii), install on another located and dump save (vwii sysmenu, wii, etc.) and restore save to your emuNAND using showMiiWad in nand mode.

maybe there's another problem which corrupts the system files. not sure for now.

You said you installed it to sysNAND ?
does it work there?
making a dump of the sysnand with valis already installed and savegame already created (not re-added using wad) doesn't work on neek?

godreborn said:
I select one nand, the other won't be read and the games won't show up.
Click to expand...

that could be normal, depends where you installed the game.
what you mean by "when I select one nand".
yuo need to install the game in BOTH emuNAND to see it in both.
installing it only in one can't of course be listed in the other path !

if at least it show in the path where you installed it, that's good.
if it's not listed in the nand where it should be located, then it's a problem (could be fixed, probably a setting ?)

with that game? or in general ?
I thought that game didn't work.

godreborn said:
except it restarts the system when I exit out. maybe I don't understand that part of it.
Click to expand...

that's what I explained above, but I forgot you were on WiiU :
if you enable "return to" option, it's "return to" the channel "exit to WiiU" in order to go out of neek.
there's no way to return to vWii sysNAND.
either you return to neek sysmenu when you exit a game (by disabling "return to" option in the loader or game settings)
either you reboot the console to exit neek (there's no other way).
the only problem on WiiU is that rebooting doesn't return to vWii, but to WiiU menu.
Reactions: godreborn


the "main" emuNAND folder should contain ALL your games. Both working AND non working with neek. ALL of them.
the "main" should list ALL games.

then, in emuNAND specific for neek, you need to ALSO install the game.

that may have solved my problem. both valis 2 and castlevania rebirth, which seem to need neek are listed, but ys won't appear. maybe the former two I had installed at some point but not ys?

alright, I have everything set up (I think), except I'm not sure how to get nintendont saves to work with usb loader gx. I have a forwarder on the wii u home menu. saves work with that, but not within usb loader gx. it doesn't even detect them. @Cyan

nm, I fixed it. now, everything is correct. thanks for the help.
Reactions: Cyan

@ Shape: Welcome! I am not staff, but this is an interesting website! Glad you're here. A moment ago
Chat 2