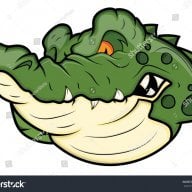 i need a good gaming recorder is there a way to do this?

Shadowplay requires an Nvidia GPU, no way around that.

I would suggest using OBS if you want to record games. While it may be used for streaming, it can also be used for recording games to a HDD as well.

thehatergator said:
i need a good gaming recorder is there a way to do this?
Click to expand...

No, Nvidia, AMD and Intel all use different API.
The good news is, they all have hardware encoding. Nvidia has NVENC, AMD has Advanced Media Framework and Intel has QuickSync. A decent capture software like OBS can take advantage of all 3. If you have an integrated GPU, you can even use the integrated GPU to record at one bitrate, while the dedicated GPU encodes the streaming video at another bitrate. That can be beneficial, as QuickSync is supposed to have higher quality at the same bitrate than the other two, but has a higher latency.

There is no great benefit to Shadowplay to begin with, it's just a fancy marketing term which refers to NVFBC, the hardware screen capture integrated into newer Nvidia GPUs, which internally uses NVENC for hardware encoding. But, Steam lets you choose whether to use the full NVFBC, or to use Steam's own screen capture methods + NVENC for the encoding part, and often I find Steam's own capture methods work better than NVFBC does, meaning NVFBC is not some black magic that necessarily works better than software screen capture. While OBS can't use the full NVFBC, its own capture methods combined with NVENC are perfectly good. I think AMD's Advanced Media Framework is not quite as good as NVENC, but give it a try, it should work just fine.

Keep in mind that hardware encoding always requires a higher bitrate for the same video quality, which isn't optimal if you're streaming on Twitch, which have pretty heavy bitrate restrictions, additionally setting the bitrate too high will make your viewers unhappy anyway, especially starting out or as a small channel when you don't have access to the transcoding function, and only the "Source" quality option is available.
But, depending on the type of content you're streaming, it's probably good enough.
Last edited by The Real Jdbye, Oct 20, 2020

My laptop has the wrong BIOS installed