Hardware Review of the Acer KG221Q gaming monitor as a retro/modern console gamer.

My original set up was pretty rough. Had an old Acer 19in VGA monitor for my PC and Best Buy special 19in TV for my gaming screen/ 2nd PC monitor. Everything worked ok but it was hard to see things sometimes on the screen and the TV was starting to get lines over it. Yuck!

So after lots and lots of research I wanted to get a gaming monitor. I wanted it to have 3 things.
1. Audio out/Headphone jack to use external audio and in order to get the sound out of my HDMI devices.
2. 1ms response time for as little of a delay as possible.
3. Freesync to take advantage of variable refresh rate on the Xbox One.

With these things in mind there were 3 brands of monitors that fit these specs in the 22" to 24" size AOC, Asus and Acer all had descent under 150 CAD options. My pick after browsing Best Buy's website was the Asus VP248QG from what I read it had a headphone jack, a 1ms TN panel and AMD freesycn. Nice the 24" monitor was on sale for 150 CAD just in my price range for a dual monitor display set up. So go to the Best Buy with my friend who was cringly going to buy some Blu-Rays of Detective Pickahu or Avengers or some cringe that you can watch online for free. All right so find out they have no display models for me to check the I/O on the monitor and that they only have one on the VP248QG in stock double cringe. Anyways I buy one monitor they had and if it worked they'd have more in by the end of the week or I could buy the 2nd one online.

So my experience with the Asus VP248QG. First off the screen was a bit big for my set up. I defiantly could not fit 2 24" monitors on my desk. Secondly bloodly thing only had an aux in port REEEE! That's not audio out and the last straw was that I was not able to get freesync working on the Xbox One. Oh well back to the Best Buy to panic return the monitor and find something else. After doing even more research and carefully checking images on the world wide web I found the perfect monitor for my needs the Acer KG221Q and I found it for a good price as well 140 CAD each even better if only because it was a 22" display instead of 24" like the Asus.

So on to the first big thing I checked when I got the screens in the mail what ports did the screens have and thankfully the KG221Q has both audio in and out which was great as I heard mixed answers online. As well as audio ports the KG221Q had 1 HDMI in port and 1 VGA in. Because of this I already got my set up ready with an 8 port HDMI switch to run all my consoles though and make gaming a breeze. Let's go though all 8 devices and let me tell you have they worked on the monitor.

Input 1: The PS3, worked a treat in 1080p and had no issues with the stupid HDCP the PS3 poses to mess things.

Input 2: The PSTV, more of the same except the PSTV is in 720p. The monitor had no issues with 720p and the PSTV runs great in PSP mode too.

Input 3: The Nintendo Switch, more of the same crisp 1080p and no issues.

Input 4: The Wii U, Nintendo's definitive system. Worked and looked great in 1080p. Tried playing some Mario Kart 8 online and Call of Duty Ghosts and I noticed I could see things a lot better. OG Wii mode also looks really nice in 1080p up scaled.

Input 5: The Retrotink 2X, now here was were I was starting to get worried. Was this monitor going to be able to handle 480p ok without issues? And to little surprise it didn't skip a beat. Tested both the N64 and Dreamcast using s-video cables on their respective systems and everything looked great. Crazy Taxi especially looked and played amazing as it is a fast pasted game and the 1ms refresh rate certainly helped with that. 1 thing that I hated at first was that the monitor was stretching all my games to widescreen. This was easily fixed by going into the monitor's settings and changing a setting to "aspect" instead of "full"

Input 6: The OG Xbox, here was another system that I was worried about. I use a pretty basic component to HDMI adapter that can sometimes send a signal out of spec and my old TV had issues when the Xbox would switch from 480i to 480p over HDMI. Well the Acer KG221Q surprised me again it actually supported the 480i signal which was not even on its supported resolutions and didn't have any issues with the Xbox switches resolutions on the fly. Played some fast pace OutRun 2006 and everything looked top notch.

Input 7: The Xbox One. Ah yes the main reason for wanting to get a gaming monitor. First off I was able to turn on freesync's variable refresh rate in the video out setting on the Xbox with no problem. The games that I tested freesync that supported it were Battlefield 1 and Destiny 2. BF1 I could see the effects of it as the screen no longer teared when there was lots of action on the screen or a lot of smoke. Another feature of the monitor that I also found out about and enjoyed was that I could add a aiming reticle to the centre of the screen which was great for Sea of Thieves.

Input 8: The last input was to my PC so I could along with the 2nd KG221Q have a dual monitor display for my PC. Not much to say. The displays played mostly nice with my AMD GPU the main one plugged in via the HDMI port on the card supported a 75 hertz refresh rate unlike the second screen that only supported 60 hertz over DVI with a HDMI adapter. Oh well no big deal both screens were easy to install drivers for on windows 7 and look amazing together. Next thing I want to do is get a dual VESA mount for them both so I can attach them to my desk but that's another project for another day.
Reactions: subcon959

Here is a picture of my finished set up with dual VESA mount. I think everything looks really sharp now. 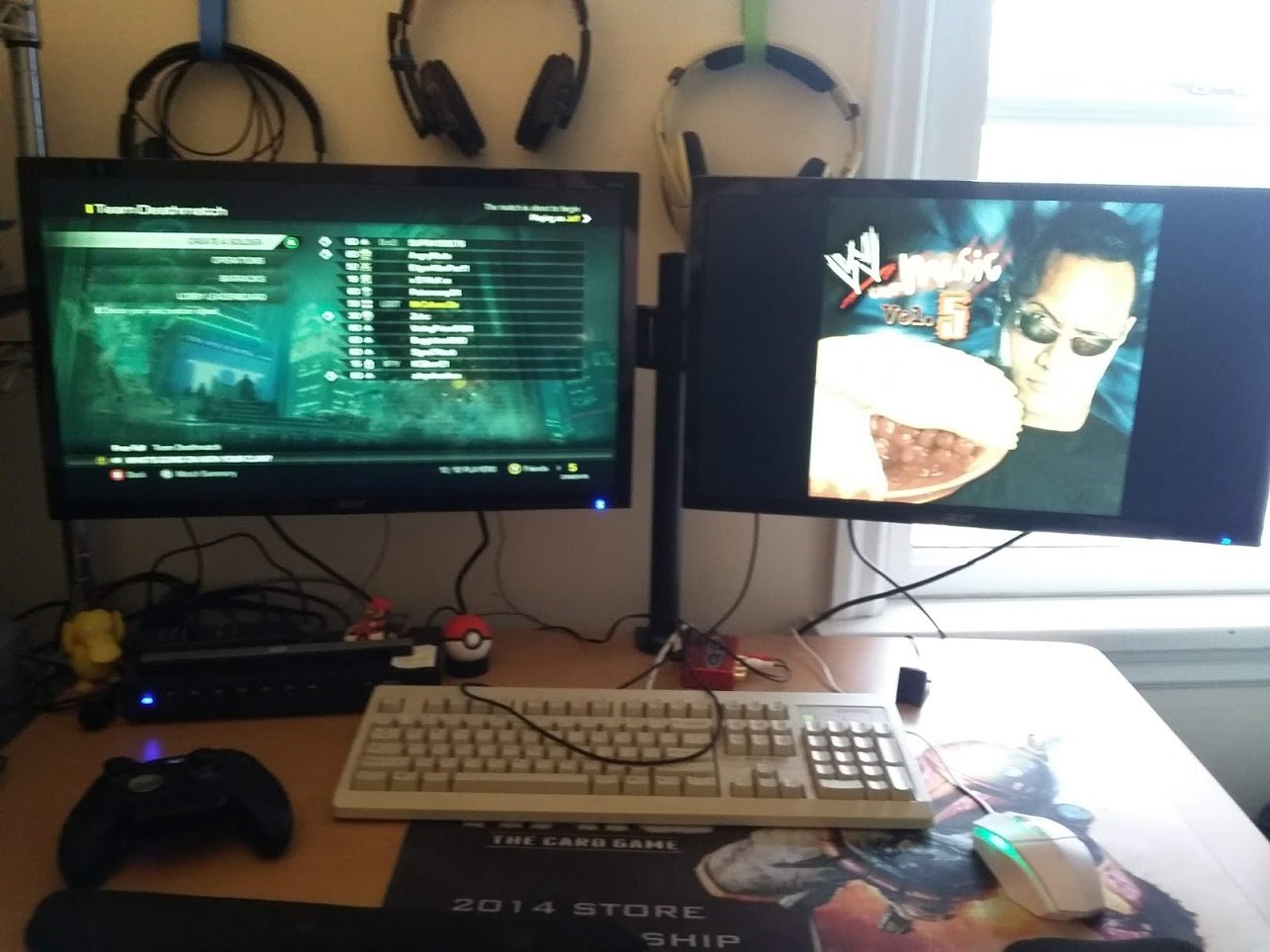 Very nice. Might be time to update the keyboard and mouse too
Reactions: MrCokeacola

subcon959 said:
Very nice. Might be time to update the keyboard and mouse too
Click to expand...

You kid, but I have been using the same Compaq mechanical keyboard since the 90s and I've developed quite the muscle memory for it. As for the mouse ya it's just a cheap sub 10 dollar optical mouse. I don't like gamer mice (I am a console gamer after all) or anything with side buttons or really more than just 3 buttons so I stick to cheaper mice.

I'm with you on that, I hate all the extra buttons on mice these days.
Reactions: MrCokeacola

PS3 refuses to display HDMI, even when video connection is reset

Computer Technology and Gaming May 21, 2020
the_randomizer