More of an informational post, I have recently changed out my PAL Wii for a JP machine. Main reason being to go all S-Video equipment. Running a legacy setup in my lounge room, full S-Video setup! Saturn, Laserdisc, HTPC and Wii all running S-Video.

Ran ModMii (What a great program! My how things have changed since the last time I soft modded a Wii...) for homebrew capability, and ModMii again to region change the machine from a 4.3j to a 4.3u, for english menus.

After testing almost all of my discs (I use original media), almost all of them were happy, however I have four that refuse to work:

Initial signs were just a straight up black screen and freeze (& wii remotes off), instead of the wii remote warning screen, when launching out of the disc channel.

After some experimentation, I've come to the conclusion/assumption that these particular games cannot run (nor have the code for) NTSC, unlike most of my other games which probably do, thus supporting and respecting the 480i setting available in PAL consoles. In turn I guess that makes these particular discs "pure PAL" versions essentially.

....and on a side note - if anybody is interested in swapping NTSC games for PAL, I'm all ears!

joebal said:
I have recently changed out my PAL Wii for a JP machine.
Click to expand...

You know the difference is just a couple of settings available in AnyRegionChanger and the appropriate region system titles... or if you only wanted NTSC S-video, a single setting, right?
Reactions: Alexander1970
J

I had spent a little time playing with ARC, the best I can ascertain is that the settings are where they need to be, see photo:

Unless there is a menu item I am missing.

Those are indeed the correct settings for an American console, on top of those you should make sure you have an American wii menu installed (do the settings work or get stuck on a page not found error?) as well as an American "region select" (ie mario kart/everybody votes channel's state selector) and EULA, plus optionally American stock channels

That will ensure American titles will work correctly, everything else is indeed not a given (Gecko OS and most usb loaders have video-forcing patches but compatibility is still questionable)
Reactions: Alexander1970
J

Ryccardo said:
Those are indeed the correct settings for an American console, on top of those you should make sure you have an American wii menu installed (do the settings work or get stuck on a page not found error?)
Click to expand...

The above ARC screenshot is the current state of the machine, so yeah the American menu is installed (by ARC). I've navigated most menu items and all is functioning as expected.

Unsure what you fully mean by this, however in the Wii system menu, the region is set as United States, and the Mario Kart Channel is installed and working.

Do you mean the EULA as referred to in the ARC screenshot? I set that to "read" back when I did the region change also. 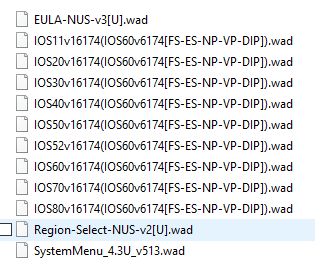 Ryccardo said:
That will ensure American titles will work correctly, everything else is indeed not a given (Gecko OS and most usb loaders have video-forcing patches but compatibility is still questionable)
Click to expand...

As a test case I ran Wii Sports using "Force NTSC" from CFG USB Loader and it gave the same result as running straight from the Disc Channel, black screen. It's when I forced PAL 50/60 that the glitchy black and white picture comes up.

It's all these factors that make me think that NTSC consoles are physically incapable of outputting a PAL signal (through S-Video at least), so if a game contains code that only supports 576i 50Hz (only in PAL system menus) and nothing else, then any other video mode will fail or be ignored.
Last edited by joebal, Oct 27, 2019

joebal said:
[region select] Unsure what you fully mean by this
Click to expand...

You answered it yourself with the screenshot of Modmii downloads - it and EULA are two region-specific hidden* channels that ought to be installed, or you may semibrick in the case of a factory reset
* "hidden channel" is a well defined technical term - it means any title with a TID-high of 00010008

Now, talking about the other files that screenshot:
- Wii Menu 4.3U is.. what it says on the tin
- the various CIOSes (based on IOS60 and to be installed to slots used for official Wii Menu IOSes) are not technically part of region changing, but serve other useful purposes:
** brick prevention (none of those are stubs, so once installed you can safely change Wii Menu version by just installing any Wii Menu wad)
** brick prevention if you're using Wii Menu 4.2 or higher and the console was improperly region changed to/from Korean (in addition to changing the settings and installing the appropriate titles, the EEPROM must be edited to add/remove the Korean key else it will only boot to error 003; IOS60 cannot be asked to perform this check so it will never cause error 003)
** trucha patched so it supports reinstalling non-original titles that were archived to SD using the official Wii Menu features
- the "optional system titles" I was referring to are the mii/photo/shop/weather/news channels, which are an optional download in ModMii (and of course not strictly required for changing region)

Well, if you're using IOS249, obviously the version of IOS56 doesn't matter
(Error 002 means indeed that a title is deliberately complaining about being run with an inappropriate IOS number, modern CIOS should attempt to bypass that error but I don't really know how [well] it does that)


joebal said:
make me think that NTSC consoles are physically incapable of outputting a PAL signal
Click to expand...

As I cut your sentence in the quote, always false - all Wiis the world over are made of the same parts...


joebal said:
incapable of outputting a PAL signal (through S-Video at least)
Click to expand...

And, at least the version of Wii Sports I had does support 480i (it will say 50/60Hz on the back of its "box"), though that indeed doesn't imply forced NTSC support!
Reactions: Alexander1970
J

And, at least the version of Wii Sports I had does support 480i (it will say 50/60Hz on the back of its "box"), though that indeed doesn't imply forced NTSC support!
Click to expand...

Yes thats right, so in my case, rather than searching for an S-Video cable, I modified my Component (YPbPr) cable, and disabled pins 8 and 10, which then makes a JP/US Wii revert to S-video mode. I then adapted the end of the cable to an S-Video plug.

In the case of my Wii Sports (AUS) edition, the box does not state 50/60Hz support, so it must just support 50Hz PAL, which of course is unsupported in S-Video

B
Making a NTSC-U/K version of Wii chess with an iso region changer?

H
Wii got bricked when I added an NTSC disc boot wad on my pal Wii priiloader wont open help.