Welcome to the 32nd issue of the GBAtemp Recommends Revival Project! This project is a weekly feature where we share our favorite games and applications with you. The things we recommend may be "old school" titles, a Homebrew, a ROM hack, sleeper hits, an application, etc, but one thing's for certain, we think they are fantastic and deserve your attention! 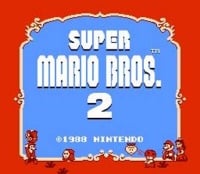 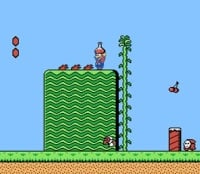 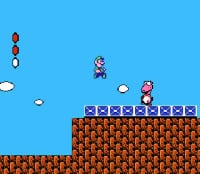 In early September, 1998, gamers were treated to a long awaited, heavily anticipated, and extremely well hyped sequel to Super Mario Bros. Developed and published by Nintendo under the supervision of Kensuke Tanabe and Shigeru Miyamoto, Super Mario Bros. 2 quickly became the game to have.

The gameplay of SMB2 was an extension of SMB1. It looked, felt, and played like a true sequel but used an odd concept for the time, the use of dreams. The game world was changed from the Mushroom Kingdom into a dreamland known as Subcon. the player must battle Wart, the king of the land, in order to save this world. As an interesting distinction from SMB1, the game included 4 playable characters, each with their own special ability. Mario was able to run faster than Luigi but retained average abilities, Luigi could jump higher, Toad could move the fastest, and the Princess could extend her jumps by floating. These interesting abilities allowed for many gameplay variations and in some instances made it possible to reach special areas such as warp zones. Further distancing itself from SMB1, the sequel featured vertical stages in addition to classic horizontal platforming stages, a health meter, and hidden coins. Coins were saved up for the end of each level, where a slot-machine allowed gamers a chance to win extra lives. The slot-machine was an interesting mini-game that frustrated those who were not able to master the correct timing required to earn up to 3 extra lives.

SMB2 was given a memorable musical score and a graphical update that helped it stand on its own. It pulled far enough away from SMB1 to feel like a new game but stayed in the universe just enough to seem familiar. Cleverly hyped through TV commercials and magazines, the game quickly went on the wish list of every gamer. After being released it sold over 10 million copies, making it the 3rd best selling NES game at that time. Yet it is often overlooked by gamers, due in part to its lack of popularity when compared to SMB3. If you've played it or not, now is the time to set out on an SMB2 adventure… we recommend it!

No mention that the true origin of SMB2 was Doki Doki Panic?

Japan already had their release of Doki Doki Panic, a game that was not developed with Mario in mind. As noted, the true SMB2, Lost Levels, was deemed too difficult for a western release. It may also be considered not much of an improvement, effectively just being a new set of levels, slightly refurbished graphics and a few new mechanics like wind or bogus warps.

The original Doki Doki Panic was actually quite harsh in that you needed to complete every level with each of the four characters, in order to beat the game, this was scrapped in SMB2 where you could switch characters at the start of each stage. In spite of Doki Doki Panic being the true origin of characters such as Shy Guy, Birdo, Bob-omb and Ninji, these characters would end up becoming mainstays in the Mario series.

It's also worth noting there was a Satellaview Version of SMB USA called BS Super Mario USA. The game was effectively a retread of the events of the original game with added narratives delivered through the SNES Satellaview addon, featuring a character called the Subcon King. The King along with other characters would periodically show up during a broadcast to give assists like triggering Star Power, using a Pow Block or provide Bombs.

Also, if you'd like to laugh at some daft SMB2 related, check out this corruption video.
http://www.youtube.com/watch?v=OV-D1ggFUj8
Reactions: 1 person

Bladexdsl said:
they should have made more marios like this i liked picking shit up and throwing it instead of just jumping on top of the enemies
Click to expand...

New Super Mario Bros has a lot more stuff like this, but it was much less of a focus than it was in SMB2.

i loved getting the game in september 1998 it was awesome. lol.

I'd love to have another one of these kinds of games for a new Mario title. I'm really bored with seeing NSMB, first two fun as fuck but I'd rather either have something that has this gameplay plus world or even go into the Land series (3D Land doesn't count).

RupeeClock said:
No mention that the true origin of SMB2 was Doki Doki Panic?
Click to expand...

No kidding. No description of the history or SMB2 can leave that out.

Please, OP, at the risk of sounding like a jerk, do a minimum of research next time.

RupeeClock said:
No mention that the true origin of SMB2 was Doki Doki Panic?
Click to expand...

No kidding. No description of the history or SMB2 can leave that out.

Please, OP, at the risk of sounding like a jerk, do a minimum of research next time.
Click to expand...

You mentioned Doki Doki Panic and didn't list the japanese producers and the documents that detailed the decision to port it? And what about the sprite artists and their prior work? How about the fact that some of the graphics from Doki Doki Panic (such as the lamp and the lock) were kept in the port but aren't used in-game as they had replacement graphics? And how dare you not mention that at location 0x1FFFB in the built ROM, you can find the string ZELDA, which points out that part of the project table was copied from the Zelda project and they didn't bother changing that?

Please, before you post, do some research. I mean it's obvious that everybody here has to know every single piece of information about a game in order to play it, right?
Reactions: 1 person

Because it is based on the Super Mario Bros. 2 prototype game, Yume Kōjō: Doki Doki Panic naturally features many elements from the Mario universe, such as Starmen, coin and jumping sound effects, the POW blocks and level warping.
Click to expand...

to be honest, you really don't have the right to bitch until you have offered to help on the recommends project.

i applaud RupeeClock for respectfully adding additional information to better enhance this thread.

as for regnad, i have no reply because i don't want to turn this thread into something it is not.

thanks rydian for your comments =)

RupeeClock said:
Japan already had their release of Doki Doki Panic, a game that was not developed with Mario in mind.
Click to expand...

I didn't think this is unimportant trivial minutia. I apologize.

you seem to have your facts mixed up.

Doki Doki Panic originally started as a Mario game prototype developed by Kensuke Tanabe. The prototype emphasized vertically scrolling levels and throwing blocks. Notably, it was originally intended to be a two player co-op game allowing players to toss each other around. The gameplay was considered not fun enough at the time and was scrapped until later when Tanabe received instruction to use the Yume Kojo mascots in a game, at which point he expanded the gameplay and developed Doki Doki Panic.[6]
Click to expand...

smb2 came first (as a prototype). doki doki panic came second. it wasn't a mario game, what rupieclock said was correct. but it used themes from mario because it was based on the prototype that came first.

what rupeeclock said is correct, doki doki panic was not developed as a mario game or with mario in mind.

does this make sense for you now?

There's a nice replay of this here:
http://www.gameinformer.com/b/features/archive/2012/01/14/replay-mario-2.aspx

Also has a good comment on those who always have to go on about Doki Doki Panic just after the one minute mark.

The cause for 100% of my nightmares as a child. That goddamn mask.

Super Mario Bros. 2 is a such great game. Stellar platforming, visuals (I liked the style) and characters with different abilities (which changed things up a bit). Honestly, I enjoyed it a bit more than even Super Mario Bros. 3 although that may just be because I've replayed the latter a tad too much times.
Reactions: 1 person