Inti Creates have been hiding some presents for players who own Azure Striker Gunvolt Striker Pack for Nintendo Switch. On the official website and twitter, they mentioned that a new wallpaper celebrating christmas is available. They also mention a new and timed exclusive holiday theme game mode "Christmas Mode" will be available to play. This christmas mode is only playable on the Nintendo switch version of the game, and is only available for 2 days, the day before and on christmas. You can get the the new wallpaper and more for free with the link in the twitter post below.

Merry Christmas, Strikers! To celebrate the holiday season, we have a brand new Gunvolt Christmas wallpaper AND for a limited time only on 12/24 and 12/25, Christmas Mode will be playable on the Striker Pack for Switch! 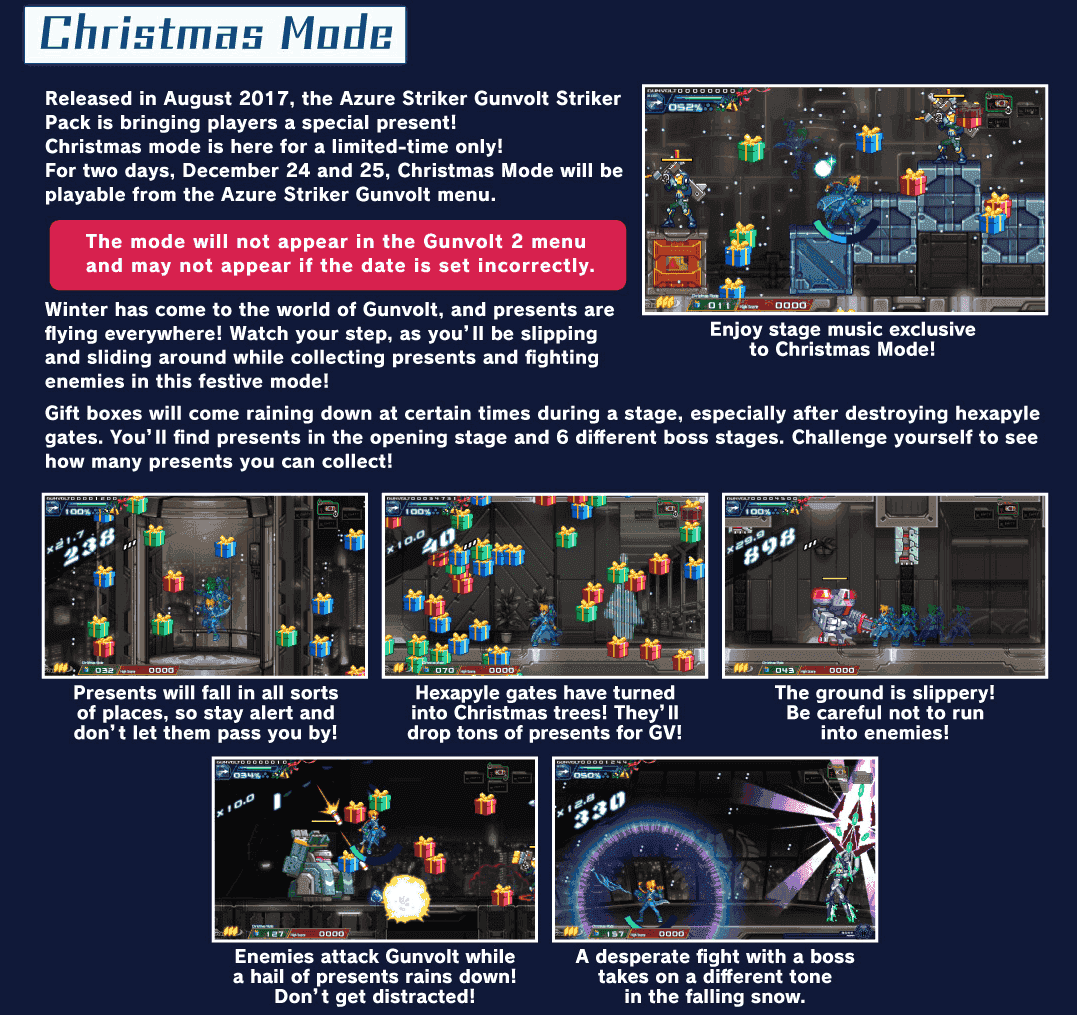 To be more specific, this is simply a easter egg in the game. The game requires no update to access, in fact is accessible anytime, even right now. To access the easter the game mode, follow these instructions.

So basically you don't need to wait till then to try it, and can be tried anytime after. Of course if no one had done something like this, it would be well hidden until you got lucky enough to actually play this on that day or found the announcement. Is not often devs are able to put stuff into a game and hide it until the right time without someone exposing it before the intended time, probably nothing too enticing for most people, but I appreciate they did cause it shows just how much they care about their game and some fans as well, is basically a appreciation gesture to players of the game.

Not many games have such features but there has been some in the past, Sonic sega all star racing had locked Alex Kidd as a hidden character only accessible after christmas day of 2013, which some had discovered before the right time, sonic adventure 2 has halloween costumes in 2 player mode when playing on october 31.

Just a reminder, they also have two games announced next year, Dragon Marked for Death and Gal Gun 2 will be available for nintendo switch. Dragon Marked for death is a game that features 4 player co-op action gameplay in the style of Mega Man Zero series of games having the core development team members of the series return to work on the game. Gal Gun 2 is the newest addition to the series of their raunchy anime rail shooter. The player controls the protagonist who is forced into a situation by the love angel Eroko for her mistake, all the girls at school have fallen for him and now you need to blast the girls of the school with pheromones shots to tame them.

As bonus to wrap this up, announced on their twitter, 3 New characters will be added to Mighty Gunvolt burst as $2 dlc on december 28. The main antagonist from the 3 games that started this crossover will be coming, Ray from Mighty no 9, Copen from Azure striker gunvolt, and Kurona from Gal Gun. Also, happy holidays. Personally I like to thank inti creates for their games this year. Is not at the status level as some other games introduced to the switch but I like what I am seeing so far and will look forward to seeing more next year.

The heroes of Mighty Gunvolt Burst have gotten all the attention so far, so it's about time for their rivals to show up! RAY (Mighty No. 9), Copen (Azure Striker Gunvolt) and Kurona (Gal*Gun 2) character DLC will be available on Dec. 28th for $1.99 each!
More details coming soon! pic.twitter.com/mLgRvEvJ1T

D
Azure Striker Gunvolt 2 is getting a PC release

@ M4x1mumReZ: What have you got to take care of? A moment ago
Chat 3