From what I understand, Altair’s Chronicles is a prequel to the console Assassin’s Creed game. I’d never know that, since I didn’t play that title. My sole reason for picking up this game, though, was because I love playing action games of this sort on my DS. The premise for Altair's Chronicles sounded cool and the gameplay promised to be right up my alley.

Before stopping to jot down this review, I took a look once more at IGN’s number descriptions for reviews. I’m going to utilize their scoring system to convey my measure of this game. So, please keep in mind that, overall, I think Altair’s Chronicles is a “decent” game. To say it’s more than that would be inaccurate, so far as it pertains to my experience with the game.

And my experience with the game was short-lived. Not because I didn’t play through it in its entirety, but because the game is…well, quite short. That said, I’m an old-school gamer – I’ve plenty of experience throwing endless amounts of quarters into a machine for a mere five-minute burst of fun – so the length of Altair’s Chronicles (AC) doesn’t bother me. However, when compared to other AAA titles on the DS, AC doesn’t try too hard to be good in any particular area, really.

AC is kind of a mix of Tenchu-stealth action and old Prince of Persia side-scrolling. It executes neither all that well, but is still quite fun on the dual-screen. Much of the problem with the gameplay comes from the framerate – it’s choppy and hinders movement of Altair (the character you play as). Also, the camera will often leave you fighting behind 3-D walls and other background elements and, during those moments, you can’t really see what the heck you’re doing. 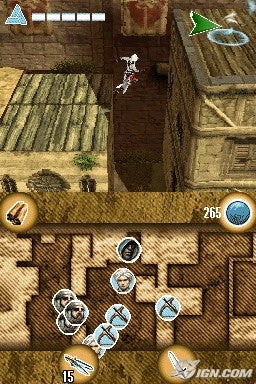 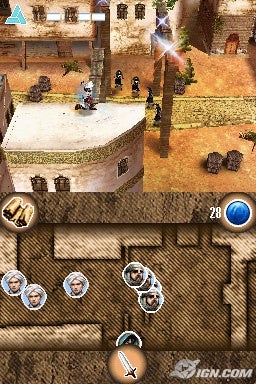 The game moves in a non-stop, straight-forward way, going from one checkpoint to another. The game auto-saves, so when you’re ready to put the game down for a while you can quit and later come back to the last checkpoint you left off at. It’s a decent system and quite forgiving in terms of repeating failed level segments.

For the most part, a given level consists of making your way from point A to point B along rooftops – the stealth portion of the game’s formula. If you get noticed by enemy guards, you must then stop to fight them off. The battle system is simple but satisfying. One combo (Y, Y, X-buttons) causes Altair to do two sword attacks and then a Matrix-style kick-back-flip attack, which looks really cool. Altair can also counter attacks and, if timed correctly, he’ll then be able to perform a one-hit kill to downed / stunned enemies. However, the framerate, here too, causes the action to feel clumsy and lumbering; what could have been a more visceral experience tends to be rather button-mashy.

Along various levels of the game, Altair will often need to retrieve an item or information from someone and that’s where the mini games make their appearance(s). If Altair requires a key to move further along a level, he’ll need to first find said key holder and proceed to do his pick-pocketing thing. At this point, Altair enters a mini game in which he must reveal the key’s (or item) location within the person’s pocket and then remove it – without bringing attention to his actions – before a timer runs out. It’s simple, a little gimmicky, but still fun. The other mini game is the interrogation. Some folks just don’t want to tell Altair what he needs to know in order to complete his assignment and, in these cases, Altair uses other means of persuasion. Here, you enter an Elite Beat Agents-style mini game in which small rings shrink and you must tap them when they meet a circled number; there’s also a ball-sliding mechanism and that, too, is lifted right out of EBA. The interrogation mini game is not quite as entertaining as the pick-pocketing game because there’s no music and no actual involvement with the character you’re interrogating.

Put the various elements of AC’s gameplay together, however, and it makes for some decent fun on the DS. It’s very rough around the edges, and seems to follow nothing but cookie-cutter gameplay elements the whole way through, but it’s still a fun, albeit short, ride for fans of action / adventure.

On the production end, AC is fairly successful. The menus have a “slick” appearance and the game walks the player through all the various mechanics along the way. The dialogue, too, is well-written and paints an interesting story. The graphics are somewhat of a mixed bag, however. As mentioned, the framerate is choppy and the character models are edgy. The backgrounds, though, have a nice aesthetic and the texture work is pretty attractive. Perhaps the game’s nicest production feature, though, is its music. Somehow, the developers manage to convey some really nice eastern sounds and music through the little DS speakers. The stereo separation is utilized well and the instrumentation comes across crisp and clear. One noteworthy wart, however, pertains to the game’s load times – they’re long and there are lots of them.

In sum, Assassin’s Creed: Altair’s Chronicles is a “decent” game that should satisfy action / adventure fans. It’s not Ninja Gaiden: Dragon Sword nor Legend of Zelda: Phantom Hourglass – for a truly great action / adventure title on the DS, you’ll have to play either of those games. But Altair’s Chronicles is entertaining for the very few hours it will take you to complete and it’s got various levels of difficulty, which should make playing through it multiple times a viable option. However, my two-cents worth is to say that it’s a good buy at a discount, but not worth a premium price. Let Ubisoft know – with your dollars – that second best isn’t good enough. They’re a big western developer now and they should be more than able to live up to higher expectations. As it stands, Altair’s Chronicles weighs in more with the likes of something like Pirates of the Caribbean: At World’s End than it does with top-shelf DS offerings. Decent – nothing more, nothing less.

Thanks for reading and happy gaming,