PS1/2 Anyone know how to extract single demo from demo disc?

I'm aiming at extracting the MGS3 demo from an old OPM disc on my modded PS2 fat.

Is there any way to rip a demo files and boot it directly?

Also can you add covers manually in OPL because I can't get my PS2 detected theough network...

First of all dump the and get the iso, then take a look inside - show the file directories if you want.
Usually multidisk games start with a sort of launcher executable that launches the others, I highly expect there to be a separate elf for that game.
There was game I had trouble loading in OPL because OPL didn't know which elf to load, since this game happened to have two executables, one was the main game and one was a demo for another, OPL kept loading the demo directly - and in the game settings in OPL you can change the elf it loads.
(I think this was one the THPS games)
Last edited by cearp, Aug 13, 2020

I'll try dumping the iso on my computer. What shoukd i use to explore the ISO?

The Frenchman said:
I'll try dumping the iso on my computer. What shoukd i use to explore the ISO?
Click to expand...

Anything that opens ISOs -- when people note the PS1 uses CD format they mean it both in terms of the physical thing and the format it uses. I forget the restrictions placed on it (iso9660 has a few variations in terms of flags, filesystem, file name lengths and whatnot) but extraction should not be an issue with even basic tools (as in 7zip's handling will probably be enough for an extraction, assuming you don't just use Windows explorer to copy the files when you pop the disc in the drive), should you have one of the fancy iso handling tools (ultraiso and the like) then even better.

Some square (enix) games did some oddities, and some games did some stuff for anti piracy. The average demo disc though should be free of that -- they are demos after all and while the PC was just learning about people swapping demo exe files with the real deal it would be a while before consoles did anything there.

I pulled apart one a while back for https://gbatemp.net/threads/found-t...-quite-different-to-na-pizza-hut-demo.556304/ but yours might be different. In that case it was all named nicely with things in a directory, and could be loaded separately. However I can just as easily see it becoming like the times we get to make a single game out of a selection be the one that is loaded, which is usually not so bad (you find the command to launch it in the launcher and make that command fire early in the launcher boot, possibly pausing to set up some IO as you do), if you then wanted to strip useless data out of it that could be harder but is still not usually that bad.
You can see the file names there on the link, but I don't know general things to look for on the PS1.
Reactions: cearp

@FAST6191 @cearp I have the folder containing the demo on my computer... how can I get it onto my PS2? Lol?
Reactions: cearp

a multidisc I made use lba tables. it's kinda a pita to get two working games, at least it was: 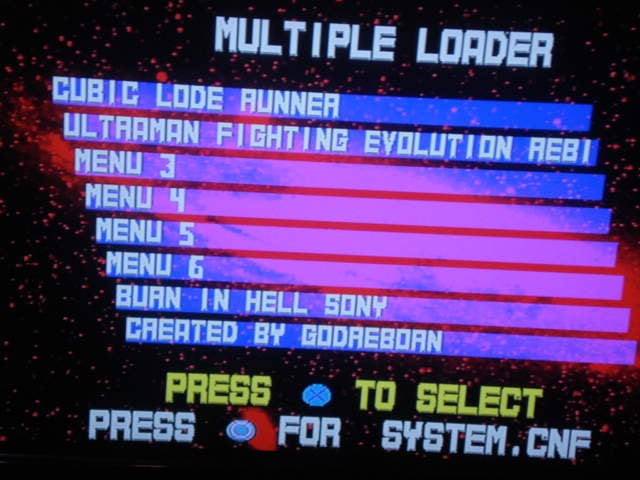 The Frenchman said:
@FAST6191 @cearp I have the folder containing the demo on my computer... how can I get it onto my PS2? Lol?
Click to expand...

you;ll have to google some guides for that sorry i'm not too sure how to get a folder -> ps2 iso. probably not too difficult.
but once you have the iso just load it how ever you load games via opl I guess.

PS1/2 OPL BATCH - finalizing the installation of a PS2 HDD

PS1/2 Esr auto patcher on fat, how to use? Please help

@ Dakitten: until spider man a month afterward which will bury it into obscurity, anyways 45 minutes ago
Chat 0