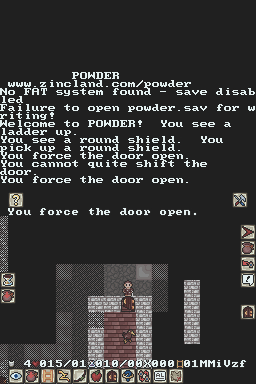 Flouting his perseverance, Jeff Lait has put out the 100th release of his roguelike, original designed for the GBA, later ported to the DS, POWDER. Nothing particularly flashy this time around, numerous fixes though. Download and full changelog below.

[title:Changelog]# Remove flash when clicking on inventory items. (Richard Quirk)
# Properly remove base item from inventory during drag. (Richard Quirk)
# Creatures have only 30% chance of doing a last-ditch self-poly rather than always doing so. A bit less optimal from their point of view, but more playable from our point.
# Dequipping items using drag-and-drop leaves the cursor at the source position, not the end position, as the end position isn't where the item ends up anyways.
# Verb List in the Command Menu now named Command Menu to be more clear. (Grothias)
# Keybinding for the Command Menu, 'V', added, so you can restore your Command Menu if you drag it off without doing a full reset. (Grothias)
# ActionBar settings should now be properly reset on every version upgrade, avoiding the embarassing bad settings seen in the 098->099 upgrade. (Richard Quirk)
# FullScreen option changes to Windowed when you are already in Full Screen. (Kantaphon Tongmee)
# Identify spell allows you to use the stylus to select an item.
# Top row of ActionBar is mapped to F1-F15 on SDL platforms. (I don't have a machine with F13-F15, so can't confirm if they work) (David Damerell)
# Top action bar shows up when in cast or command menu mode even if action bar is disabled. This is because it allows you to assign your F1-F15 keys.
# Pressing F1-F15 during Command Menu or Zap screens will bind your current command/spell to the relevant slot, so there is no need to invoke your mouse.
# Soul Suckers will properly target you when you are more than one square away.
# When you look around with the stylus you will no longer replicate your original overlay icon. (Richard Quirk)
# [DS] When I made [X] and [Y] remappable, I also accidentally swapped their meaning. Since the swap was done in the last month while the original meaning was around for 10 months, I've decided to swap them back. This means [X] is now Verb List, or [Start] equivalent, and [Y] is Inventory or [Select] alias. The rational is that the relative location of [X] and [Y] line up with [Start] and [Select] If you grew used to the swapped version, remember that you can remap them back by hitting [Select] in the Command Menu. (Matthew Rollins)
# The Dip and Identify menus require you to chose a Checkbox or X button rather than just picking what you click on first. This allows you to explore your items with the stylus to figure out what you want to act on.
# Moved the help icon to the top left which, thanks to the keyboard shortcuts, means hitting F1 gives you help.
# Having a custom tileset will no longer cause you to revert to the classic tileset after ever load. (Matthew Rollins)
# One new room.

Go Jeff Lait, been playing it since I stumbled across it a couple of months back posting news and enjoying it since then. 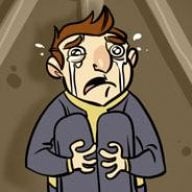 me too, mostly because it has randomly generated maps. does 100th release mean it's his last one?

I don't think so.

It really should have an updated screenshot, since the game looks awesome with the new tiles.

Anyway, the new version is awesome and it's easily the best dungeon crawler on the DS.
He could easily sell it once he adds some sounds and music.

QUOTE(electrii @ Jan 23 2008 said:
He could easily sell it once he adds some sounds and music.
Click to expand...

Heck yeah, I'd buy it in an instant!

Personally I prefer the pink guy, but screenshot updated.