Gaming My PC setup and build

So I wanted to share these, because I have the ability to. I should stop talking now though since I like to talk a lot when I make threads, it's like I have so much to say!

Anyways, first up is my personal PC build/setup - 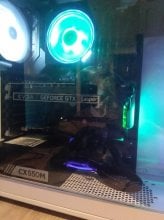 So, we got the display, right. And it's nothing too special, just a standard old HDMI monitor.
We've got the keyboard and mouse, which is nothing special once again, same pairs with the microphone and headset(If you're curious, lemme know and I'll spill the sauce).
We've got an old speaker thing that was like, just mounted to the top of that shelf there, which is epic. Because now I have a clear shelf.
On the pullout shelf, we have my DJ mixing board thing, which I'm still learning how to use. A digital drawing tablet-pad-thing, and a tiny notebook to write sick rhymes when I think of them.

Inside the case we have a -

It's a pretty good setup to be honest, and it's my first one too. As long as it can run majority of games in high quality I'm not asking for better.

He's got like, one of the first consumer-grade 3D monitor things, he doesn't use the 3D functionality but the monitor is slick as fuck so it's awesome. The other monitor displays nerd shit.
He's got some good keyboard, and mouse, along with a good headset.
On the left he has one of those cool keypad things, which he uses every chance he has. Same goes with his Stream-deck in the middle.
Right smack in the middle of the shelf, there is one of those TRACK-IR things, which he got for 20 bucks from some angry girlfriend.
Below the desk, he's got some cute food pedals for his spaceships, and his joysticks are neat too.
All the other shit around the desk is just all his weird junk, which is cool I like weird junk too.
If you couldn't tell, he's super into Star Citizen. He also has all the money in the family so I just get the shitty shit box to the right of the basement.
(Yes, it's dusty. We know.)

Inside the case we got -

All I really wanted to do was show off my new slide desk thing but dad insisted I showed everything else so here we are. I decided to put specs since I have a strong feeling people might ask! 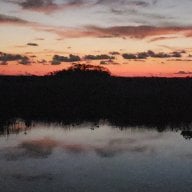 Nice!!!! But can it run Crysis? Lol
Reactions: Mama Looigi, Alexander1970, Minox and 2 others
S

Psionic Roshambo said:
Nice!!!! But can it run Crysis? Lol
Click to expand...

lmfao no, i wish though!

Although to be fair, Crysis still can stress a system....
Reactions: Alexander1970, BigOnYa and slimbizzy
S

Psionic Roshambo said:
Although to be fair, Crysis still can stress a system....
Click to expand...

crysis is something else, that's for sure
Reactions: Alexander1970

Sony announces specs and customization features for Spider-Man on PC

@ The Real Jdbye: i just saw a video yesterday that mentioned how it's a good thing 1-2-switch wasn't a pack in... 15 minutes ago
Chat 1