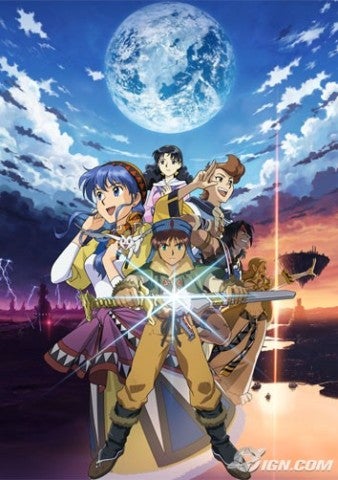 The Lunar Silver Star series are renowned as a Cult-Classic game. They've been ported numerous times and I took a shot at the PSP version in this last week. It took about 20 hours to beat, and the ending was worth it in my opinion as a Lunar-Amateur/Newbie. Lunar is pretty slow paced. It feels as if the games plays itself through the grinding AI, (the AI can do a full round of turns for you).

However, you can't skip the battle animations or speed up the game play *at all*, that was probably my biggest grievance. Also, the difficulty of the game really wasn't hard till the end-game 90% finish mark or so, even then, and now after beating it and watching through the credits it feels as if the game was watered-down substantially. That being said, Lunar still presents an enjoyable experience.

Overall, Lunar was a good game to play for the romantic theme, I particularly enjoyed most of the Alex-Luna scenes towards the end of the game. In fact, the main Lunar melody is stuck in my head at the moment, it's simple, pretty much Alex on his Ocarina and variations of it throughout the game. The music is great for a classic RPG, the simple ocarina melody tunes and their variations as well as the discordance provided by character development definitely fit well into the story. The Dungeons I would have had a moderately difficult time with, in a sense, they almost may hinder the development of the story (and I almost found progressing through them annoying).


Code:
(couldn't get the youtube code to work! sorry xD

I wish the developers took more risks. The reason I say this is because most of the graphics for both monsters and party members looks far too similar, there are only a few spells that really deviate from one another and these are acquired towards the end of the game. Graphic wise I've heard that it's the prettiest version of Lunar yet, but all that considered, I wish things like Equipment having different looks were worked on more. It was either very subtle, or it was basic weapons and master weapons. The battle system was extremely straight forward and wasn't hard at all to figure out, the only thing that disappointed me was the lack of arts-gauge [special] attacks (2 max by the end of the game).

The thematic of the "Dragon-Master" Quest to visit the White/Red/Blue/Black Dragons was a fun endeavor, but since Lunar is about 20 years old now, it feels quite cliche' to me as a first time player. I enjoyed most of the cut scenes, which are used to advance the plot. The voice acting, I thought was *okay*, but I really could not stand Nash at all, and I'm glad I'll never have to touch him again. Lunar Silver Star Story is/was a game that I thought I should play my way through once. Lunar is a game that doesn't try to be more than it is, and I'm glad for that, it's a title that's stood the test of time.

The Interface through the triangle button was polished quite nicely. What I also liked was that I could save anywhere so long as I wasn't in a battle, it was a nice feature for a casual game. Meeting people throughout the game presented itself in a way in which I thought was unique in that you *really were* Alex, and some of the earlier cut scenes readily reinforced this concept. There were a number of humerus scenes, and the presentation of the game was quite keyed into knowing who its audience was. Unfortunately, because of how cliche' the game was. foreshadowing future conflicts and ideas like the relationship between Luna and Althena and Laike and so on, were pretty easy to figure out.

However, just because something's easy to figure out didn't lessen Lunar's appeal to me. When something actually happened like XXXXX reveals himself to be so and so, and Nall turns into a dragon the actual presentation and realization towards the player/audience is pretty significant. In the end Lunar, in my opinion, is more of a journey where the end result is the most important and meaningful thing. It's a story, and your playing to experience the conclusion! I can see why Lunar obtained cult-status, and I'm definitely looking forward to checking out some other cult-status games like Earthbound or Parasite Eve for example.


Presentation: The game's storyline is a classic, if a bit predictable The port was well done, keeping all the classic features of the from the old games. The menus themselves I believe have been updated significantly to reflect the screen/size of the PSP. The cut-scenes towards the end of the game are wonderful and really lend themselves towards a classic story. 7.5/10

Graphics: Lunar is almost a 20 year game now, receiving many ports since it's original conception Lunar has never looked better. However, that doesn't mean that it isn't without its flaws, many of the battle animations are bland and don't feel very distinguishable from one another. The town design is definitely pretty, but I feel like there were some extra things like adding unique weapon/armor appearances that could have been done to make it more appealing. 6.5/10

Audio: Lunar got some new voice acting, especially an awesome introduction opening! However, that being said, the actual voice acting can be annoying if a bit grating at times. Like many other games you've played, you'll want to skip some of these moments.. The soundtrack is decent and considerably enjoyable for someone expecting a classic RPG experience, it's primarily ocarina melodies and variations that tend to reflect emotional, characterization and plot development. (8/10)

Gameplay: Classic RPG experience with a few new modifications. The "AI" can handle a full round battles, often used during grinding, the game pretty much plays itself to a fair extent. Manual battles really don't deviate all that much and there isn't much allowance for them to deviate. Since I haven't played the older ports I can't reflect upon progression, but Lunar's gameplay is incredibly simple and there are only 2-3 bosses that present a challenge (in a 20 hour avg completion rate). 5/10

Lasting Appeal: 8/10 Overall, Lunar is a game that everyone should play once. While I don't suggest that you play this port necessarily, it is a good game for what it tries to be. I don't foresee myself playing this game again, but I may look into Eternal Blue when it is re-released(?). Lunar is a hard game to give a "bad" score to, I enjoyed playing it, but it had plenty of flaws. Overall, I'm glad that I played through it.

View top chatters
Open in popup
F @ Forseenink3938: Can anyone here please help me on how to use TickCrypt 2.0? 37 minutes ago
Chat 0