Yeah buddy! I cant wait for this one!

So Cyborg, Batman, Wonder Woman, Aquaman, and Flash. That's it? Weren't there 7 in the original animation? Superman, Green Lantern, Wonder Woman, Batman, Martian Manhunter, Flash, Aquaman? Maybe more, but that was a pretty small cast. The trailer spoils BvS, at least I think so since there's no Superman in it. However, I'm hoping he or someone at least pops up and joins them. 5 just feels small, oddly enough. The trailer definitely tried to make this film look like Suicide Squad in terms of a more fun tone. Flash guy is a bit annoying though.

I will waiting for this! But, this one was different that other superhero character on animation version (series and movie).... 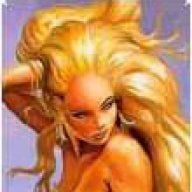 Oh, well, when it will be released?

I am going to watch it, even though I have a feeling that it will suck

Wonder Woman's eyes supposed to be blue. AquaMan supposed to have blonde hair and normal blue eyes (Not weird eyes like an alien or something). Sighing.

Suicide Squad: Kill the Justice League has been delayed to spring 2023

The Edge of the Forum Jun 25, 2022
Creamu
C
W
I need help getting two no-longer-available Android games, each one with OBB files, to work via Android emulation