Entertainment blogger David Poland recalls Lucas’ comment on Wednesday at the Publicist’s Guild luncheon: “George Lucas, giving the award to Sid Ganis, who was the in-house publicist on Star Wars: Episode Five – The Empire Strikes Back, said, ‘Sid is the reason why The Empire Strikes Back is always written about as the best of the films, when it actually was the worst one.’”
Click to expand...

Remember, that means The Empire Strikes Back is worse than this: 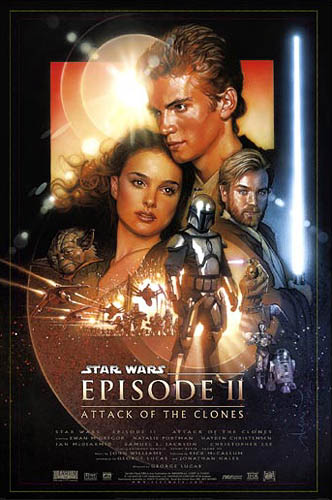 Sure, it's possible that he's just joking, but this is George Lucas we're talking about. It's kind of hard to give him the benefit of the doubt when it comes to his Star Wars shenanigans.

Even if he is being completely serious, it doesn't mean it's the worst movie.

Many artists will have a big song, and the artist will end up not liking it just because of how much recognition they got only for one hit. I guess it can be related to this.
Reactions: 1 person

It's probably because Empire is the best one that Lucas didn't direct.

Sucks that the whole world disagrees with this...and we also all know that Han shot first.

awssk8er said:
Even if he is being completely serious, it doesn't mean it's the worst movie.
Click to expand...

And that's not the point. It is (if true), however, extremely telling about his standards of quality, which casts a new light on the prequels, the re-edits, the dancing, etc.

Edit: And just because it's worth reiterating, according to Lucas...

George Lucas has turned into one of the biggest trolls known to man.

@vuples He also didnt direct return of the jedi.

Somehow this comment doesnt surprise me though. Lucas seems to get more bizarre as time goes on.

Somehow this comment doesnt surprise me though. Lucas seems to get more bizarre as time goes on.
Click to expand...

apparently he did direct some scenes in it or so i heard, vadars funeral i think being one

Anyone who continually slaps his fans with threatened law suits for doing little more than celebrating and advertising his product is either insane, a complete ass-hole or both.
Reactions: 3 people

Empire strikes back worse then Episode 1 and 2?, yes I liked Episode 3, I find this a little hard to believe.

the fuck is your problem, the man has his own preferences and obviously didnt make the star wars movies for you, but for himself. There is no accounting for tastes.

Clydefrosch said:
the fuck is your problem, the man has his own preferences and obviously didnt make the star wars movies for you, but for himself. There is no accounting for tastes.
Click to expand...

Yes, because clearly, the lavishly expensive special effects extravaganzas with huge marketing pushes and tie-ins (toys, clothes, animated spin-offs, cereals, etc.) were little projects George made for himself. Even if that was the case, that doesn't make those prequels immune from the criticism they've rightly earned.

And on your last point, I'd like to borrow a quote from Guild's signature: "It's like saying you enjoyed listening to someone sing completely out of tune or reading a book whose pages are covered in brown sauce. I know it's your opinion but your opinion is just wrong." -Ben "Yahtzee" Croshaw

a movie is not better just because you first saw it when you were 5.

to be honest, the only thing that made me like star wars at all was the villian design, the glowing swords that could cut anything and the fact that they had something called "death star" even though it was nothing but a huge gray ball.

the story wasnt anything special, besides for the whole playing in space thing, it followed pretty simple themes. space people, space conflict, space daddy issues, space love born out of space bickering. the whole force thing was a cool idea in general, but that wasnt anything new really. comics and tv shows had the telekineses thing on for quite some time already... so space telekineses

the actors, well, they were actors and as such did a good enough job, but oh well? that was about it. im happy that ford was able to go on making good movies later.

costumes, yeah, great, black robes, robes not so black and fur suits of varying sizes. apart from the menacing vader costume, most of the stuff was pretty unimpressive.
dont get me wrong, i like jim henson-like stuff as much as anyone, but i dont think the ewoks are much better than jar jar was.

i actually prefer the pod-race scene in comparison to the death star trench flight.


im not saying the movies are bad, they arent, obviously. but im saying the new ones are underrated, while the old ones are overrated.

Troll better or be less of a movie hipster. Saying Star Wars (the first two at least) is bad is like saying Citizen Kane was shot rather poorly. You're just wrong.
Reactions: 1 person

Troll better or be less of a movie hipster. Saying Star Wars (the first two at least) is bad is like saying Citizen Kane was shot rather poorly. You're just wrong.
Click to expand...

I wasn't going to be as nice.
Reactions: 3 people

TwinRetro said:
I wasn't going to be as nice.
Click to expand...

Oh trust me, I wouldn't have any objections if you decided to say your comment now
E

Troll better or be less of a movie hipster. Saying Star Wars (the first two at least) is bad is like saying Citizen Kane was shot rather poorly. You're just wrong.
Click to expand...

1. i didnt troll and i dont even know what a movie hipster is, i was just voicing my opinion. i'm neither the biggest fan of star wars, cause honestly, i like to watch it once in a while, nor am i a hater just cause i dont think its the best movie ever made.

2. i even said that i'm not saying the movies were bad. but i am pretty sure, if we had actually gotten the movies in chronological order, with 4-6 coming like 10 years later, people would act just the way they are now "bwah, its not like the thing i watched when i was a kid, so its bad"
and "you're just wrong" really is no arguement either. thats the thing you say when you have nothing but subjective arguements to back you up.