The Phantom Thieves are back in the first full sequel to Persona 5. How does Omega Force's combat style mesh with the Persona universe?

The Persona spin-offs have a spotty track record. After the series exploded in popularity with 4, spin-offs became a regular fixture, especially given the introduction of social and dating sim-type elements around that same time. Players were becoming more and more attached to these characters, so various spin-offs were made to capitalize on that affection, usually crossing the characters over with each other. They’re generally seen as a little fanservice-y and lacking the depth of the mainline entries, instead reducing the characters down to tropes and catchphrases. Given the way Persona 5 took the world by storm, a spin-off was inevitable.

I should be upfront: I’m not the biggest fan of Persona 5. I love everything about it except for the script, but the issues I have there are pretty major. One of my biggest problems is with the brainwashing that the main characters use to resolve problems. Not necessarily the moral ambiguity of it (though I would’ve liked more time devoted to that), but the way it ripples and affects the rest of the story. In order to justify the brainwashing you’re doing, the villains are all cartoon caricatures; one-dimensional, over-the-top embodiments of evil that are just impossible to take seriously. So not only does that make all the time spent in the villain’s head feel like a waste, it makes it harder to get invested in the good guys’ stories because the setup always feels so absurd. Especially for the side characters (but for some of the main ones as well), it robs them of their arc, as their stories don’t resolve through personal growth; they just endure a bad situation until magical brainwashing powers make it go away. 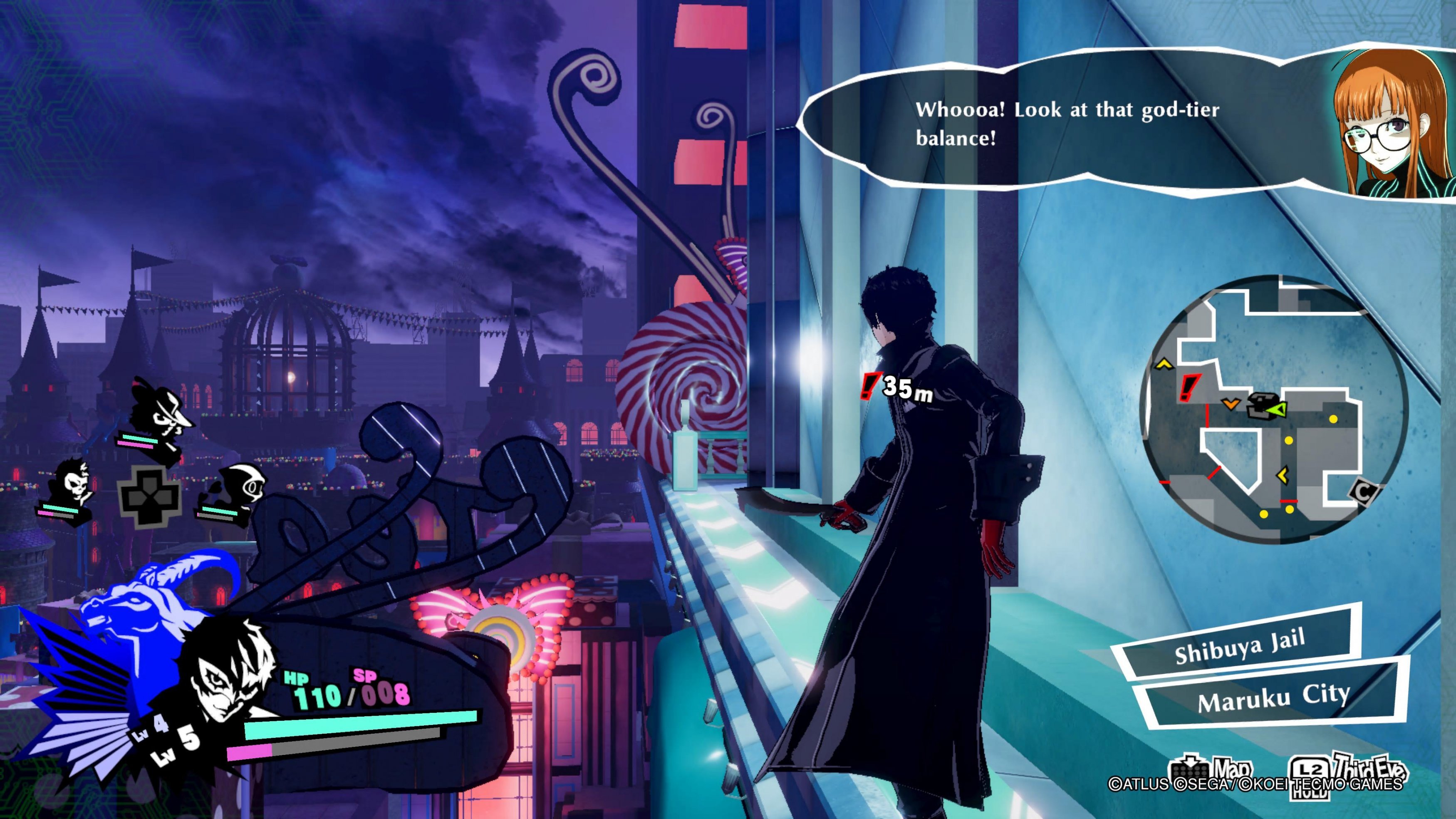 I only bring this up because Persona 5 Strikers addresses a lot of my issues. Here, rather than the cartoonish Palace rulers, you’re fighting lower-level baddies called Monarchs. The basic setup is that they’ve all been using the Metaverse to brainwash people into becoming their fervent worshippers--for example, a novelist looking for diehard fans or a politician looking for evangelical supporters. But there’s also steps taken to humanize these Monarchs. You see the idealism they had, and the trauma that took that away. Since you’re not using the Metaverse to brainwash these Monarchs, only to undo the brainwashing they’ve been doing, it doesn’t feel like you’re magically hand waving away their evil; the change comes from dialogue and a genuine character arc. Things are still wrapped up pretty neatly: a boss fight and a single dialogue exchange changes this person’s attitude completely, but at least the groundwork is laid for them to be three-dimensional people early enough that it still plays. In Persona 5, when you met a villain’s Shadows (their other selves and evil desires), it just felt like you were talking to the regular version of the villain. In Persona 5 Strikers, when you meet the Shadows, it actually feels like an aspect of their personality, rather than the whole thing.

It also does a good job of keeping the focus on the original characters. Each Monarch has some connection to one of the Phantom Thieves, like another struggling artist to connect to Yusuke or another person of privilege who was a family friend of Haru’s. They don’t grow or learn much from these stories, but if you’ve already got some investment in these characters, it’s nice to see how they’ve maintained the lessons learned in Persona 5 and how they try to carry them out to others. The Phantom Thieves in general are all very well-written. There’s no hint of the stereotyping that plagued the other spin-offs, and without the more frustrating aspects of Persona 5’s plot to weigh them down, it’s easier to get lost in the pointless banter and grow some affection for these characters. There's also finally some more nuance added to the morality of the Phantom Theives' methods, and the script is refreshingly brief. As much as I love Katsura Hashino's work on the series, he had a terrible habit of writing in circles and having long scenes that peter out. Strikers captures the energy and fun of his characters without getting weighed down. 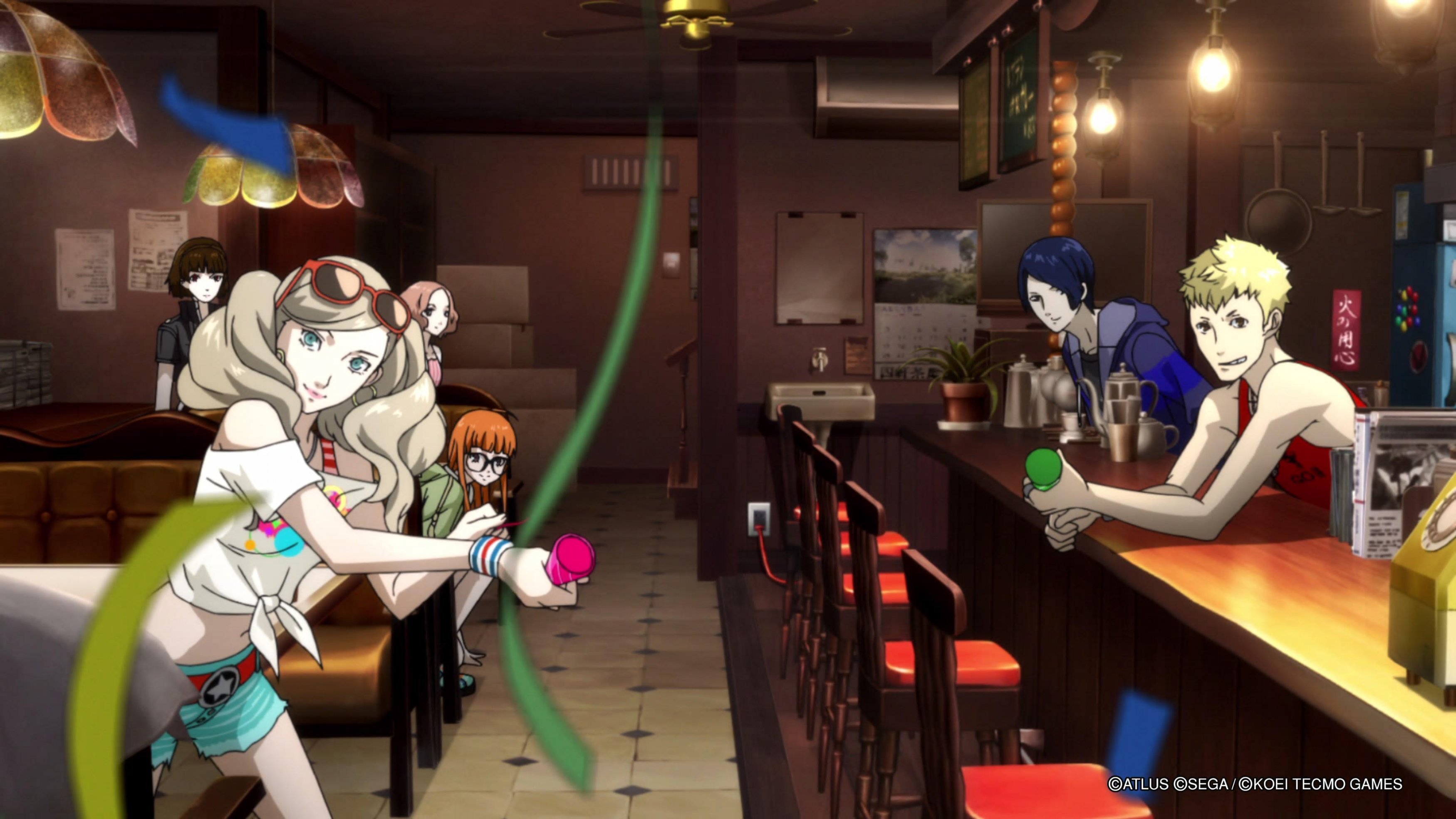 The new additions to the cast fit in great, as well. Previous Persona spin-offs have faltered by focusing too much on new characters, but Strikers makes sure to keep the spotlight on the established characters we’re here to see. The two main additions are Sophia, an AI that seeks to understand the human heart, and Zenkichi Hasegawa, a Public Security officer that acts as the Phantom Thieves’ liaison to the police. Sophia mainly acts as this game’s Morgana, a convenient plot device with a mysterious past, but enough personality and character moments to not feel like a waste. Like Morgana, she becomes more actively involved and gets more development near the end of the game as her past is revealed, but there’s enough investment in her at that point that the payoff is worth it. In her quest to understand the human heart, she also questions Joker on some of the complex things she sees around her, like why the Phantom Thieves ultimately try to help the villains they defeat or how a moment can be both happy and sad. These talks are a little on the nose, but they’re brief and lend Sophia an endearing, child-like innocence. Zenkichi, for his part, is affably gruff, a put-upon public servant who stays likeable because he seems honest and hard-working despite his weariness with the job. (Tom Taylorson’s performance also does a lot of heavy lifting here.) The Phantom Thieves are initially suspicious of a cop trying to work his way into the group, but he slowly ingratiates himself due to their opportunistic use of his skills and connections. By the time real focus is put on him, he feels like he’s always been a part of the group.

While the writing is a big improvement over Persona 5, the gameplay doesn’t quite perfect itself the way it did there. Rather than a turn-based JRPG, Strikers is a Muzou-style action RPG from Dynasty Warriors developer Omega Force. Persona 5 was already an incredibly stylish game, so the flashy theatrics of Omega Force’s combat translate very naturally to this world. Unfortunately, most other aspects don’t mesh very smoothly. You have your entire roster of eight characters available from the jump, which feels a little paltry compared to other Omega Force titles. Having them all available from the start also makes it harder for them to stand out; it’s just a classic problem of too much information being thrown at you at once. Luckily, they do all play differently enough to feel distinct, and you’ll end up trying them all out as you’re encouraged to change up your party to handle the enemies’ elemental affinities. 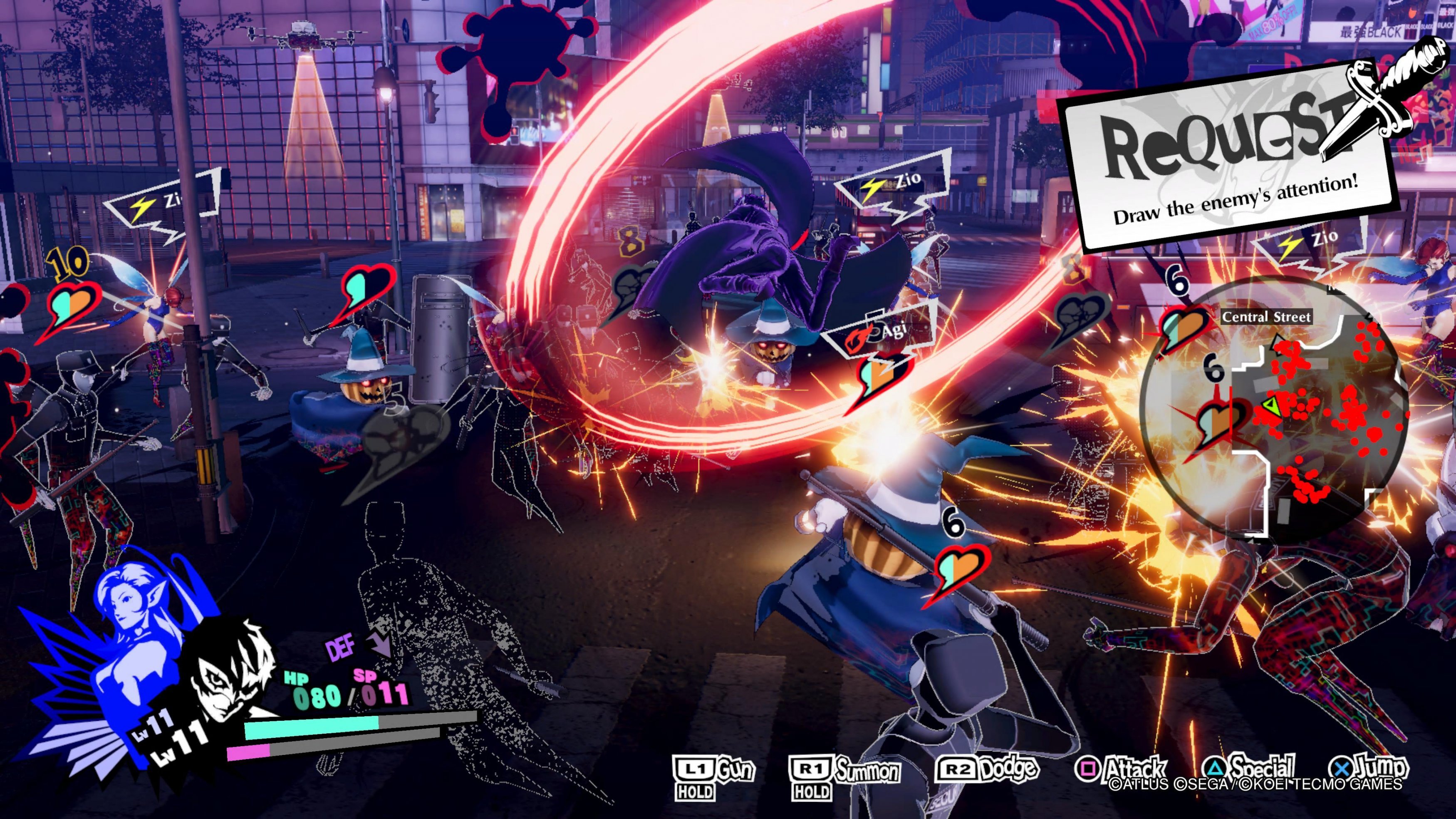 Elemental affinities have always been a big part of Persona’s combat, and this is no exception. They function mostly the same as in any main Persona game: strike a weakness to knock down an enemy and get another move, knock them all down to get an all-out attack that does big damage to them all. The only difference here is you only need to knock down a small group to get an all-out attack, and you can pull unaffected enemies into it if they’re close enough. That’s a neat mechanic that adds a little bit of strategy to the fights, but strategy is very rarely needed. Ambushing an enemy will usually let you start with an all-out attack that ends things immediately, and if it doesn’t, you can usually finish things quickly with a few errant swings. Strikers also takes the Persona 5 Royal approach to guns, meaning your ammo is replenished after every fight, and the guns are powerful enough that you can do serious damage without ever having to get close enough for your enemy to hurt you. You’re also free to leave the dungeon and completely replenish all your health and mana at any time, with no penalty, so there’s no war of attrition happening with you and the enemies.

The boss battles can be challenging, but without the restrictions of a turn-based system, and no time restrictions on how often you can use your Persona, there’s no reason not to just stand there and spam whatever elemental move the boss is weak to. Bosses do have a down gauge so that they don’t go down and get hit by an all-out attack immediately, but hitting weak spots will still do appreciable damage and you’ll eventually get the all-out attack. The only restriction on this method is your mana, but mana restoring items are plentiful and totally unnecessary at any other time, so most boss battles can be breezed through like this. 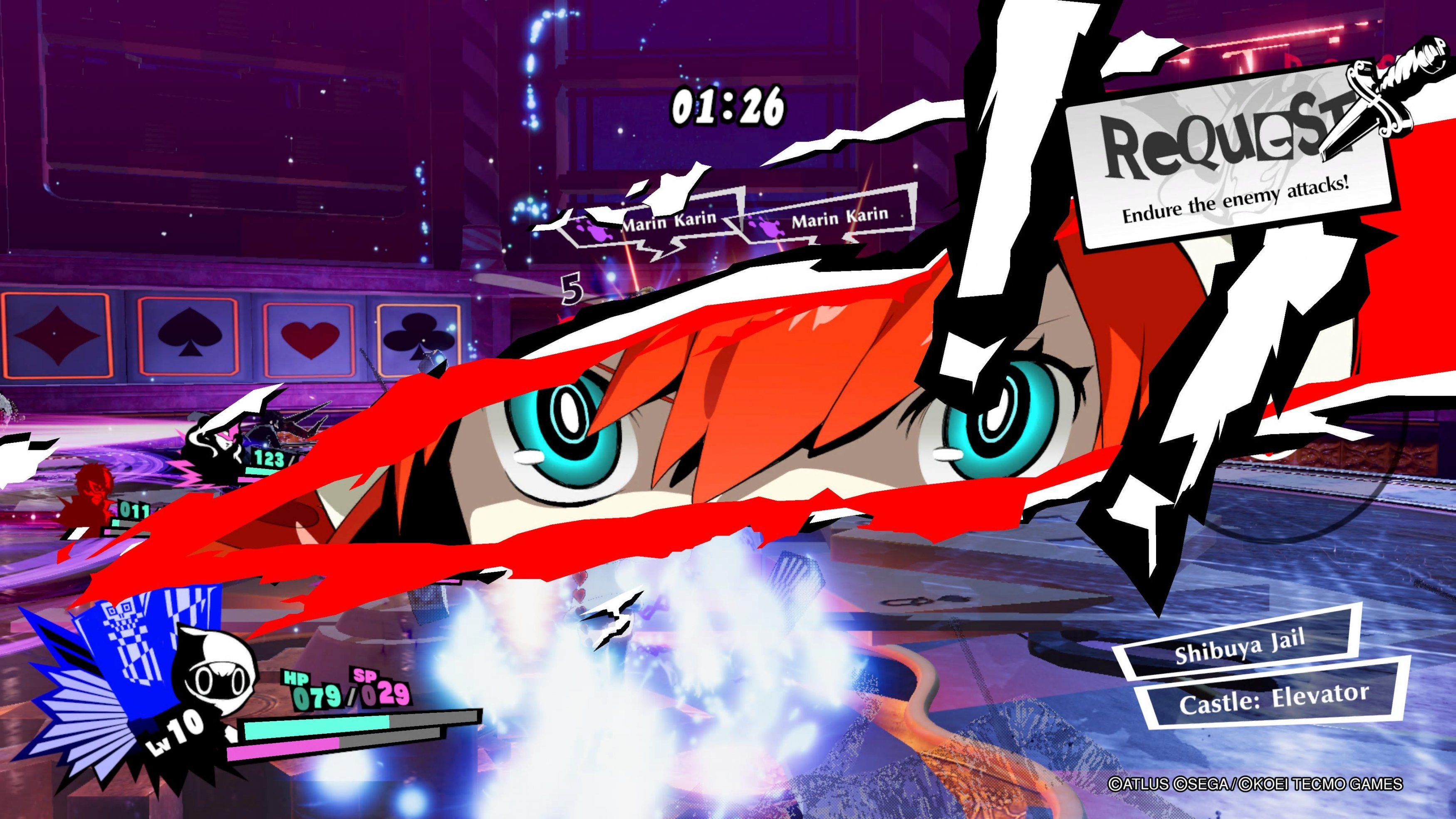 I realize strategy isn’t normally a big part of an Omega Force game, but it was a big part of Persona 5 and the implementation of those strategic elements here feels out of place. They do help ground it in the Persona universe, but it feels like misplaced effort. It would have been disappointing to see a Persona game missing these elements, but it would be better to have a combat system tailored to create the best possible experience rather than include elemental affinities and all-out attacks to the active detriment of the combat.

That being said, the dungeons are still a lot of fun to explore. Monster design remains one of Atlus’ strongest skills, and dungeon themes are varied and inventive. The best music is mostly remixed or lifted straight from Persona 5, but even the new tracks do a fantastic job of reaching the standard set by Shoji Meguro. That music goes a long way in keeping long dungeon-crawling segments engaging, and can really enhance the mood as you prepare for a big fight. Even if the combat’s a little too easy, the progression is still fun. I put a lot of thought into managing ability and equipment upgrades, and there’s some damaged part of my brain that squirted out some serotonin whenever I ground out another level without putting in much effort. 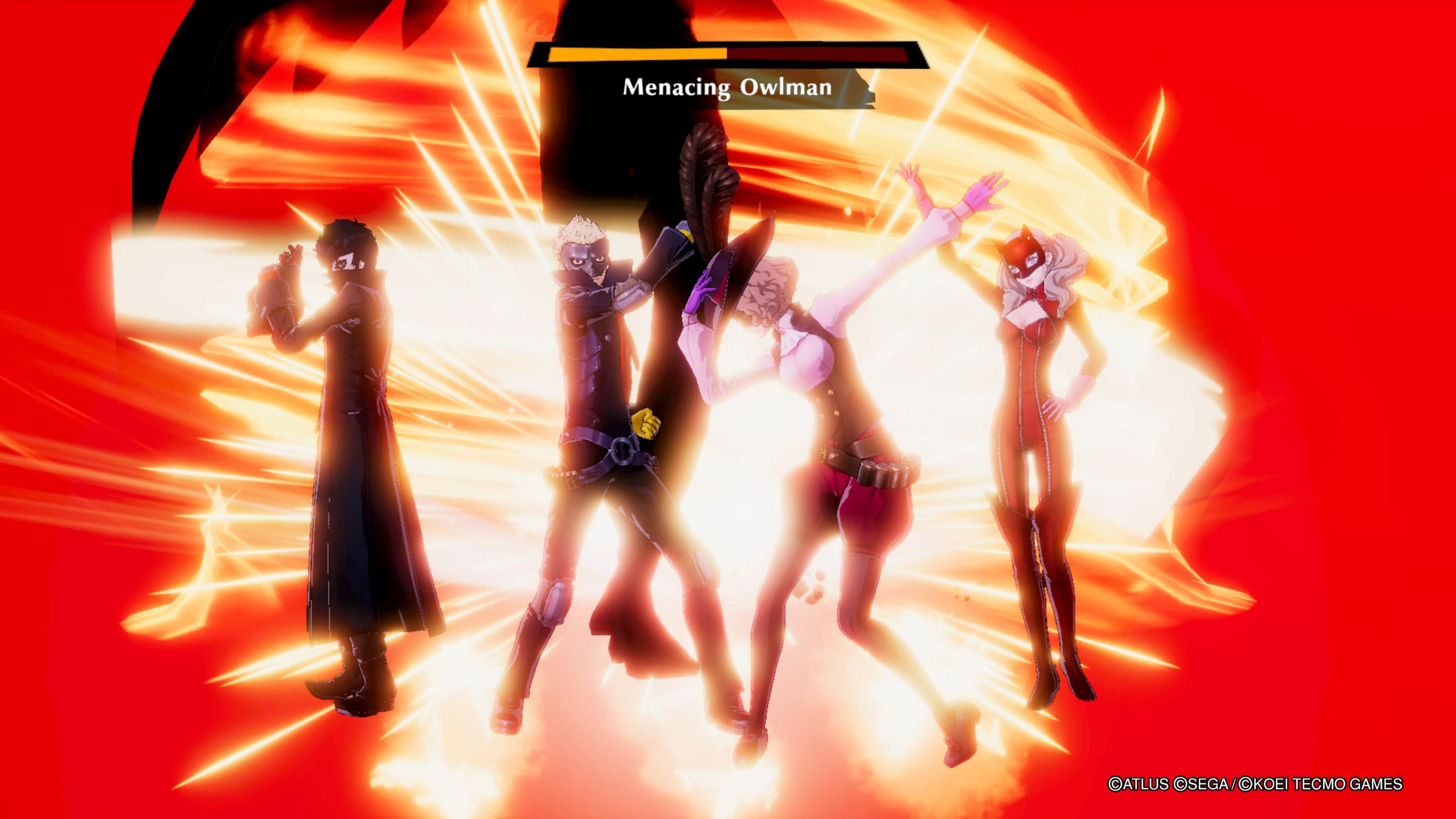 On top of the music and monster design, there’s actually a lot done to make this feel like Persona 5. Environments from Shibuya are lovingly re-created for the first dungeon, and much of the UI and character portraits are the same. Even minor elements like the calendar system return, down to the little knife that pins the date to the wall at the start of every day. If someone only saw the non-combat sections, they could very easily think they were watching scenes of Persona 5.

Despite the missteps of its combat, Persona 5 Strikers is a terrific spinoff. It probably isn’t going to wow people unfamiliar with the original, but it manages to deliver everything a fan would want, without feeling like low-grade fanfiction, like previous Persona spin-offs. It deftly captures the heart of Persona 5 and only adds to it, while hardly losing anything along the way.