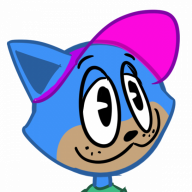 Hello. I haven't participated (or even been here) in a while. I'm not sure if this the right forum to ask this in, but does anybody know anything about this format? I'm pretty sure it's a 3D model. If anyone wants to play with it, I attached 2 files, which I'm not sure what they look like.

Can't say I have heard of it before but I tend not to deal the most with exotic 3d formats on the DS, and tie in games are a frequent source of such formats (especially the earlier and later efforts). A simple test would be to swap the files around within the game* and see what happens (as in open up the ROM, rename/overwrite some files with another of the same extension, and carry on with life). Be aware that such things usually result in you having to write your own decoder of some form, or maybe do a few light edits by hand.

Did the token look at with a hex editor.

Some interesting runs of ASCII in both of those (ACV, m3NA, TXOB, LAM and more besides that might be marred a bit by compression. Speaking of compression
Curiously they compress a bit (meaning they are likely not compressed already) which is somewhat odd for this sort of thing, though at the same time looking at the files then there are what look to be telltale signs of compression. The files start with 01 which is not a common marker for compression but it could be that individual sections are compressed (or not compressed hence the extra compression working) or there is an extra header there. If there is an extra header then in both cases a few bytes in there is a 10h and followed by a number matching ones either side when flipped which could well be compression but I don't have the tools here right now to play with ( https://www.romhacking.net/utilities/826/ ). If push comes to shove you might be able to grab it from memory as the game is running as it will likely be decompressed there.

But yeah see what happens if you swap around the files.

Sorry for not being specific about the game- it's SpongeBob Atlantis SquarePantis. I'll try messing around with memory dumps and swapping the format around.