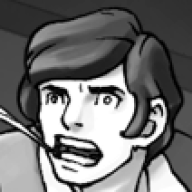 So, I have a New 3DS XL, firmware 10.3, and whenever I try to downgrade to 9.2, I get the "An error has occurred" screen, regardless of whether my SD card is in or not. After that, I enter recovery mode and reset to 10.3, then try the downgrade again. I've read many posts stating that formatting the console will fix this error, but being rather attached to my save data, I decided to experiment a little and see if I couldn't find a way around it.

What I eventually decided to try, after about 7 softbricks and a lot of cursing, was to see what I could downgrade to, if not 9.2. It turns out that the first update after the new encryption started, 9.6, worked perfectly on my N3DS, and I didn't get a single softbrick trying to downgrade to it. From there, I decided to see if, by working my way down the list of updates, I could make it to 9.2. I did this, and it seemed fine at first, except that once I made it to 9.2, I downloaded the firmware checker and discovered that native_firm hadn't been affected by the downgrade since I was on 9.6.

Thus, I remain where I am now. I would prefer not to format, but no downgrade past 9.6 works. I was hoping some of the people who knew more about the N3DS than I do could help pinpoint what was causing the softbrick based on what I found out, and maybe find a fix for it that doesn't involve formatting.