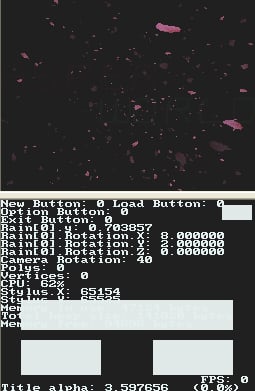 Davpk has released a pre-alpha v2 of his Spanish RPG for the NDS.


21/12/2008:
- Added effect FadeIn / Fade Out "to make transitions.
- Added source text (accented vowels are printed scroll down a bit).
- Added feature start of play.
- Added feature options (not yet visible in the game).
- Added interim song to start the game.
- Enhanced functions relating to the save.
- Small optimizations in the main code.
- Change the numbering versions will now be numbered from 1 to infinity, with the previous version "Release 1" and the current "Release 2." Even-numbered versions are changed to "pre-alpha" may not be very similar to the forthcoming final version of the game.
Please visit the Homepage if you wish to download this pre-alpha.

"Davpk and released a pre-alpha v2 of his Spanish RPG for the NDS."

Hell_AleX said:
"Davpk and released a pre-alpha v2 of his Spanish RPG for the NDS."

it was a little hint

Early alpha build of Skate 4 leaks, EA tells fans to not download it