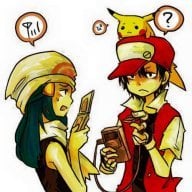 I'm looking for some tips on repairing a backwards-compatible fat PS3 suffering from the RLOD (turns on, instantly turns off flashing red) issue. Years ago in an idiot move, I had a "professional console repair service" repair the original YLOD/overheating issue it was experiencing, and it worked for about a week, so I have no idea what they did to cause the RLOD.

I've been following along with guides and videos for a reflow (which I know is a temporary fix), but now that I'm down to the board, things don't seem to match up. There doesn't appear to be any heat spreader on either the CPU or GPU, and if I look at the underside of the heatsink, I believe they are stuck against the heatsink via the thermal compound they applied-- but I'm not really sure what I'm looking at, to be honest.

I figured the best course would be to post a few pictures so I know exactly what I'm dealing with before going any further.

Any tips would be appreciated; I'd really like to get this console going again.

Edit: After some additional research, I'm pretty much certain that the heat spreader for the GPU and CPU are dislodged. What would be the best way to properly and safely reattach these to continue with the repair?

You can rebuild an old ford from the 1990s, but is it worth it? No because they were bad to begin with.
Let it go my friend and buy a switch.

Magsor said:
You can rebuild an old ford from the 1990s, but is it worth it? No because they were bad to begin with.
Let it go my friend and buy a switch.
Click to expand...

As to help OP look into delidding. The whole process of opening the cell is quite hard but worth it in the end as you can make the PS3 run much cooler in the end. Lots of people have also put PS3s in PC cases to help with cooling as well.
Reactions: RavenTsun