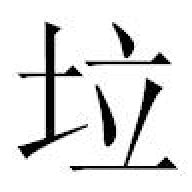 Just for kicks, I decided to test out mp3 file names in the 3DS mp3 player renamed to a few different world languages. I'm using a U.S. 3DS. Obviously, the English, French, Spanish and Portuguese languages work as you can change the entire system menu to those languages.

If the characters don't display correctly, a white box with a question mark appears.


I was just curious as to which font sets the U.S. 3DS came loaded with.

As a slight linguistic aside, Japan, Korea, and China (obviously China) use Chinese characters as part of their writing scripts. Traditional Chinese characters can be quite complex, and each country dealt with this complexity in a different way. Japan retains some traditional characters as well as simplifying some others (after WWII). Mainland China did a complete simplification overhaul after WWII (Singapore also uses the simplified script). Taiwan retains the traditional characters in their entirety (I believe). Korea retains the traditional Characters, but mainly uses their own native hangul script.

The reason I mention this is because of how Nintendo decided to selectively allow and disallow some characters. For example, mainland China and Japan share the simplification for the character "國" ("country"), simplifying it to "国". Both versions of the character display fine on the 3DS.

However, the traditional character "東" ("east") is retained in Japan. (such as in 東京 - East Capital, namely Tokyo). The simplified version used in mainland China is 东, and does not display on the 3DS.

So far, this all seems normal, given the U.S. 3DS was designed in Japan and has not currently been released in mainland China (as far as I know). Also, it is a US firmware 3DS.

Where things get interesting is that the 3DS will correctly display traditional characters that are no longer used in Japan. (only Taiwan and Korea use them currently)

I would be fascinated to hear from a native speaker of Japanese or Chinese as to why they think this is (or anyone with more than my pedestrian knowledge of Chinese letters).


I suppose my main question is this:

Are those traditional characters supported so a more traditional (pre-WWII) Japanese can be displayed on the 3DS OR is the 3DS also available in Taiwan and it utilizes the U.S. firmware there?


Seeing as this is still technically about the 3ds firmware and the font sets it supports, I hope this was an acceptable post. Also we are an international community here right?

Well, most of my Japanese ID3 tags are in Euc-JP and not in Shift-JIS.

Shif-JIS is working fine, but Euc-JP is not

I would have to convert all my tags one by one


Then, about the filename itself, japanese filenames are fine on Windows, but not on 3DS.
Is that ISO-2022-JP for Japanese IME on western windows charset?

Well, ID3 Tags are not always working, though they use the same char-set ?