Xenoblade Chronicles is back in its third iteration with enhanced visuals, remastered music tracks and new content. Is this Definitive Edition the definitive way to play this decade-old game?

You probably know of Xenoblade Chronicles by now, given the fact that the game was released twice already: first on the Wii in 2010 and then in 2015 as one of the few exclusives for the New Nintendo 3DS. If you didn’t have the chance to play it, then brace yourself for a tale of Titianesque proportion, quite literally. Indeed, Xenoblade Chronicles tells the story of a band of revenge-seekers as they venture across the bodies of the two frozen battling titans. The latter, the Bionis and the Mechonis, are home to living entities who are at war against each other.

Led by Shulk, the wielder of the legendary sword Monado, or the only effective weapon against their Mechon enemies, our diverse cast venture forth across the Bionis’ surface to seek revenge against the new faced Mechon that took the life of his childhood friend. However, their quest for payback takes surprising turns along their eventful journey.

On their way, they’ll make new friends who join their mission, and you’ll experience how each character and their relationships evolve. We get to witness Shulk’s gradual progress from a frail weapons researcher to a hero wielding the Monado. Then, there’s the never-ending bromance between Shulk and his bestie Reyn. You’ll even get to peek into the soft side of the stoic Dunban. Like this, the main characters’ arc progresses alongside the game's narrative and ultimately comes full circle. More than just revenge, Xenoblade Chronicles portrays a tale of friendship, duty, and romance in a world with flying beasts, mechs, giants, and more, all worthy of your wildest sci-fi fantasy dreams. 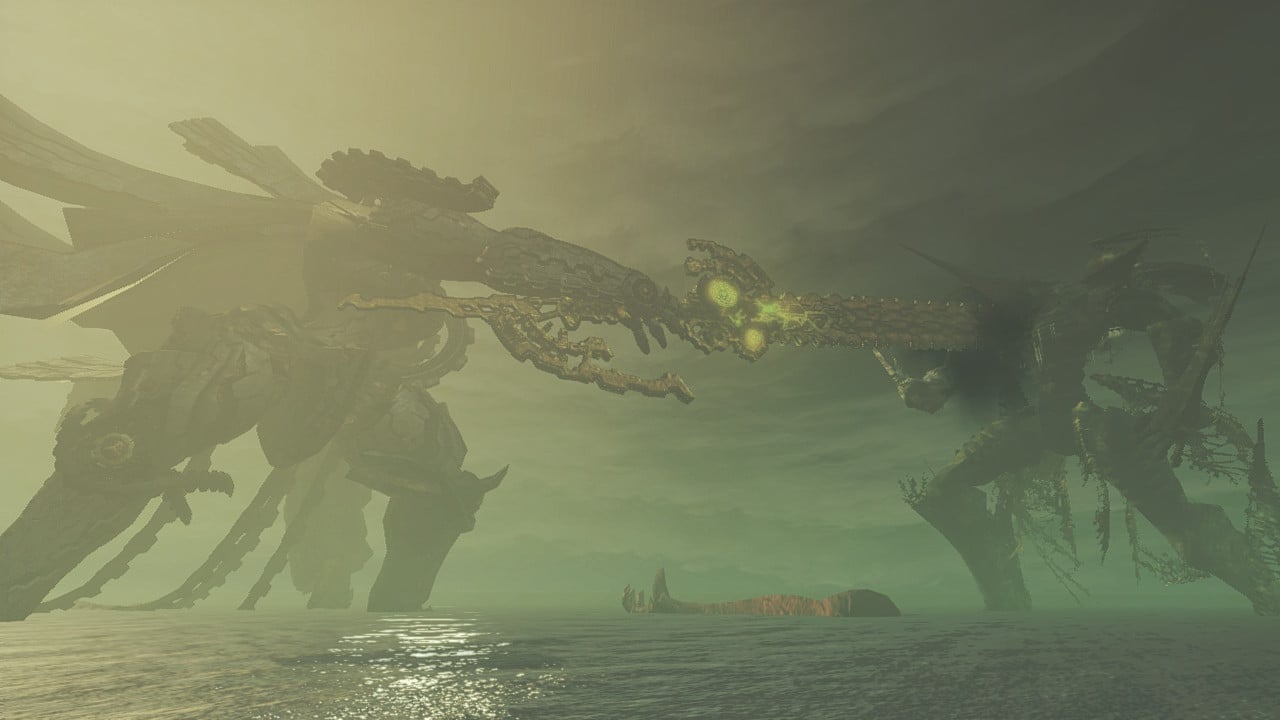 Even if it’s a slow start, the story picks up the pace after a couple of chapters and will keep you hooked with its numerous unexpected (and sometimes expected) twists. Even in 2020, Xenoblade Chronicles’ plot aged well enough to make for a memorable one.

What you might not be familiar with is the Epilogue chapter that Xenoblade Chronicles: Definitive Edition adds. Titled “Future Connected”, this brand-new addition takes place one year after the events of the main game and follows a new adventure starring Shulk,  Melia, and a few new characters. It’s a less technical approach compared to the main game, making for a more streamlined addition. It adds about 10 hours of new content which might feel somewhat disconnected to the main game and more lighthearted, but still offers its fair share of fun. With Future Connected, Monolith Soft might be giving a glimpse of the direction the Xenoblade series could take with upcoming titles. 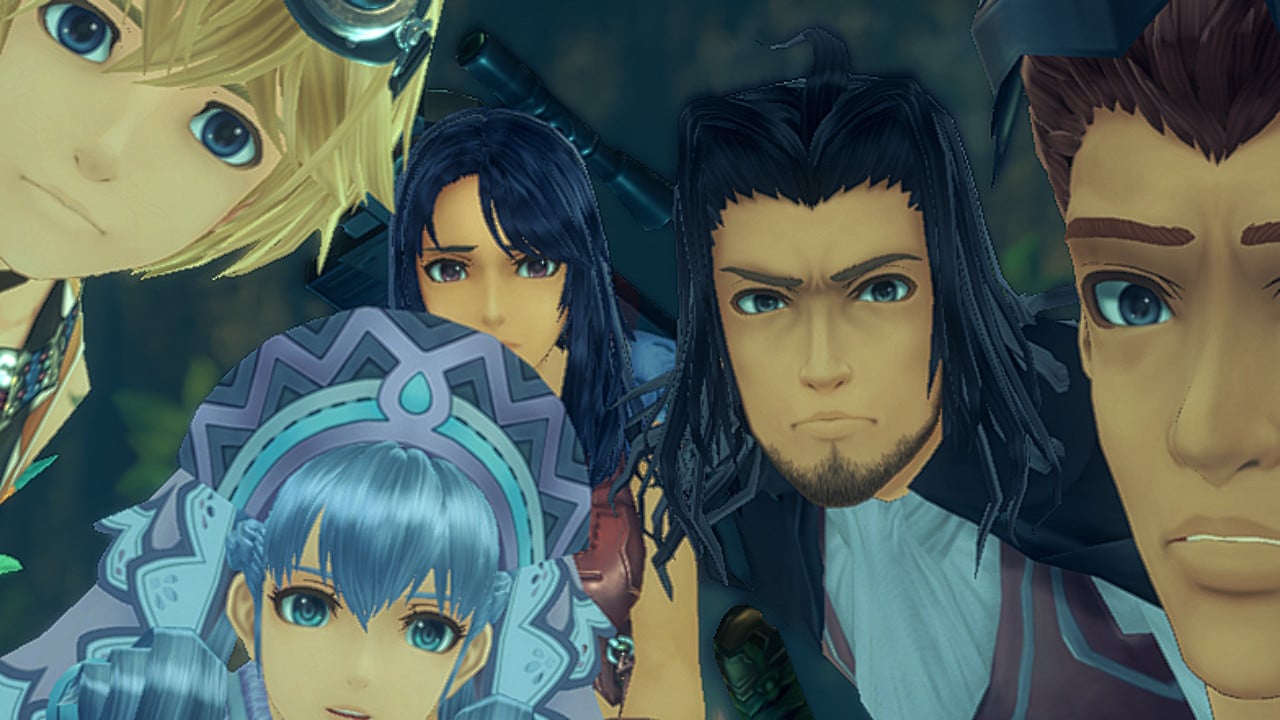 But for the main campaign, more than the plot, the gameplay can get tricky to translate to "new-gen" and a new audience especially when it comes to JRPGs. On that front too, Xenoblade Chronicles makes a rather good impression with its tactical, real-time combat mechanic and revamped UI. For the uninitiated, your party of three’s basic attacks are performed automatically, while the special ones (Arts) of your party leader are up to you to manage. Engaging in an offense does involve some skill in optimizing attacks as some are more effective when dealt from the side or back, or need to be followed up by an ally’s attack to topple an enemy and deal devastating blows.

There’s quite an initial learning curve to get a grasp of all the mechanics involved. You’ll have to manage your party members’ individual skills trees, their Arts and optimize their equipment. There’s also a crafting mechanic for gems that can provide additional buffs to characters. Successful handling of these features will ensure that you have the upper hand in combat.

It’s all quite hefty to take at once, especially if you’re a newcomer. At times it even feels like a chore to regularly handle the individual skill trees and Arts of separate character, especially as the game forces you to control specific characters at certain points other than those you’re used to and will require that you acclimatize to the new party members. There’s also the need to grind at certain points and reach a desired level to defeat certain opponents and progress. These are the remnants of a decade-old JRPG which haven’t aged that well. 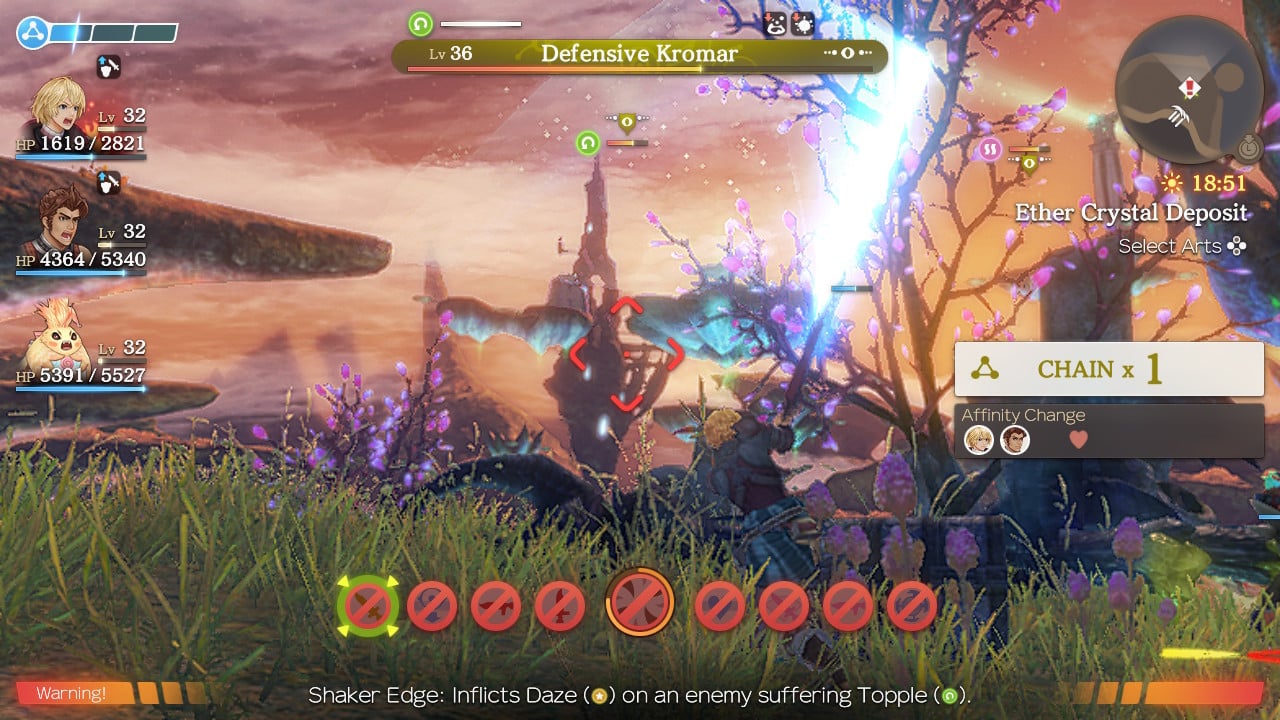 If these elements sound like too much, the Definitive Edition features a “Casual Mode” with easier battles, giving you time to acclimatize to this whole gamut. This new re-release also adds a feature that indicates when certain arts are most effective, which can be particularly handy when you’re lost in the chaotic frenzy that the battles often turn out to be.

Hardcore JRPG fans looking for a challenge will be enticed by the new “Expert Mode” that gives you control over the XP gained and allows you to manually distribute them. Whichever mode you pick up, once you get a hold of the combat mechanic and strategize your battles, the latter feel satisfying and flow fluidly. After all, who wouldn’t feel some sense of pride after beating towering mechas or flying Telethias up to no good? 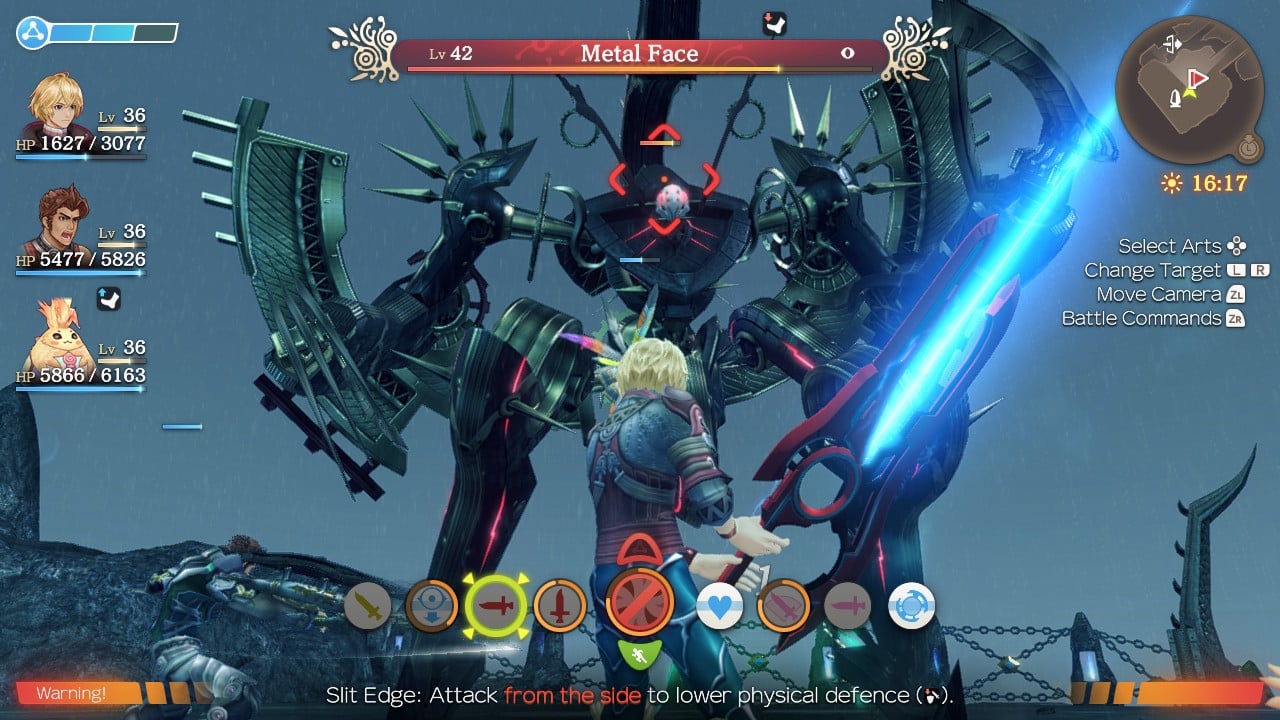 Additionally, unlike most JRPGs, there aren’t any items to use in Xenoblade’s combat, so you’ll have to rely on your own abilities and that of your team members when it comes to healing and temporary advantageous effects. Fortunately, Xenoblade Chronicles does offer quite a healthy cast of characters to choose from, each with their own unique abilities and combat styles. Shulk is a rather balanced choice who is indispensable when fighting against Mechon enemies thanks to the Monado’s ability. Reyn leans more on the aggro side of the spectrum while Sharla can offer a more supportive role with healing rounds or long-distance shots. At times, there are up to 7 characters to choose from in order to form your main party.

Indeed, Xenoblade Chronicles does not lack in variety. More than getting you to play with different characters with their own combat styles, the landscapes vary as you travel from one titan to another as Shulk & co. seek revenge against those who hurt their loved ones. Sceneries vary from lush green valleys to steampunk-ish cities to sandy beaches to snowy mountains. These immensely vast and diverse areas also hold flora and fauna of their own; fauna that will often attack you as you intrude their natural habitat. 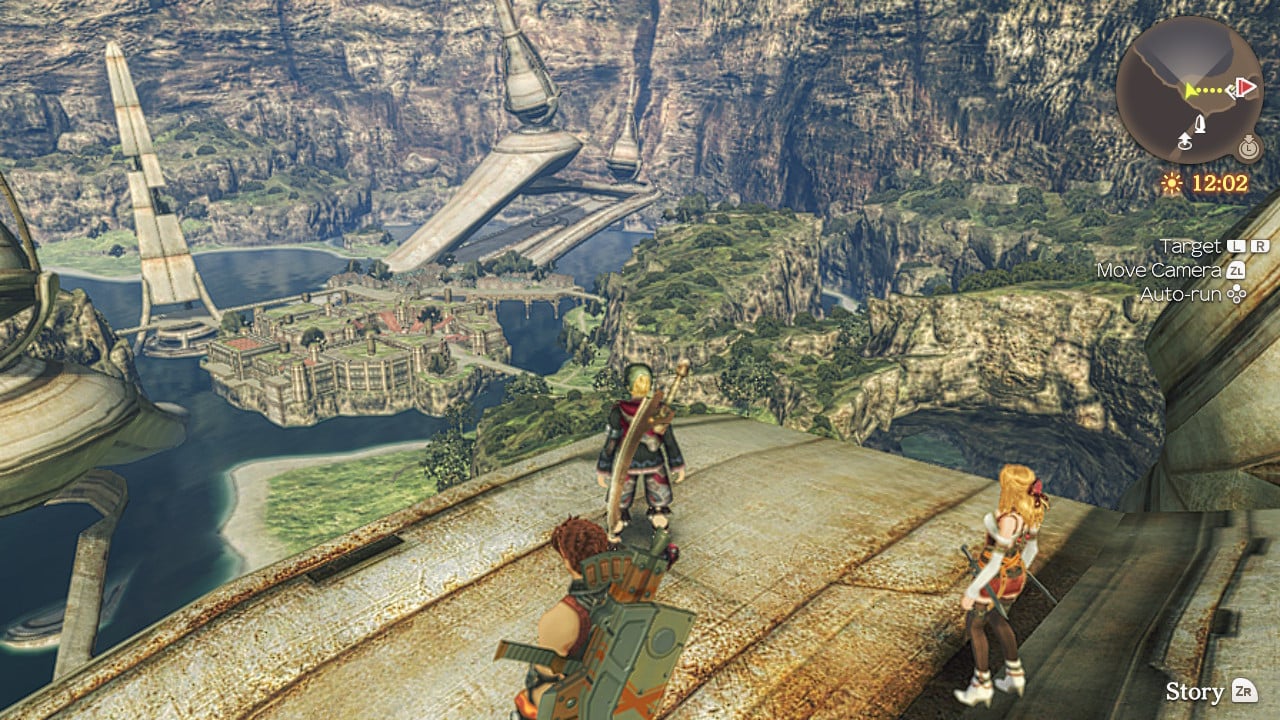 Exploring these sprawling, open-world areas can reward you with side quest items, level up by engaging in combat or simply allow you to take in the view. However, it’s not as open-world as Breath of the Wild, but more of a free-roaming kind as your actions are limited to running around and fighting. In fact most of the roaming could have been condensed because there’s so much grass or snow or sand you can or want to see before reaching your desired spot. But it’s proportional to the titans along which you travel (yes, you do venture across both titans). Thankfully Xenoblade Chronicles features a fast travel option and instantly teleports you to a landmark in an area you’ve been before. But it would still help to venture forth into uncharted areas with some sort of vehicle or flying a Telethia to cut down on the endless rote roaming sessions.

As for the side quests, Xenoblade Chronicles: Definitive Edition brings back the whole lot from the original. You’ll find a ton of them available in almost every scene ranging from finding a lost wedding ring to helping soldiers fight monsters to finding people’s stolen clothes. They are insanely abundant and most are still the basic fetch quests with no real implications and are rather nice-to-haves. The addition of an actually useful map in the Definitive Edition is useful in completing quests with their locations visible with exclamation marks. It also clearly shows you the path to your objective so that you don’t get lost in the open areas you’ll often find yourself in. 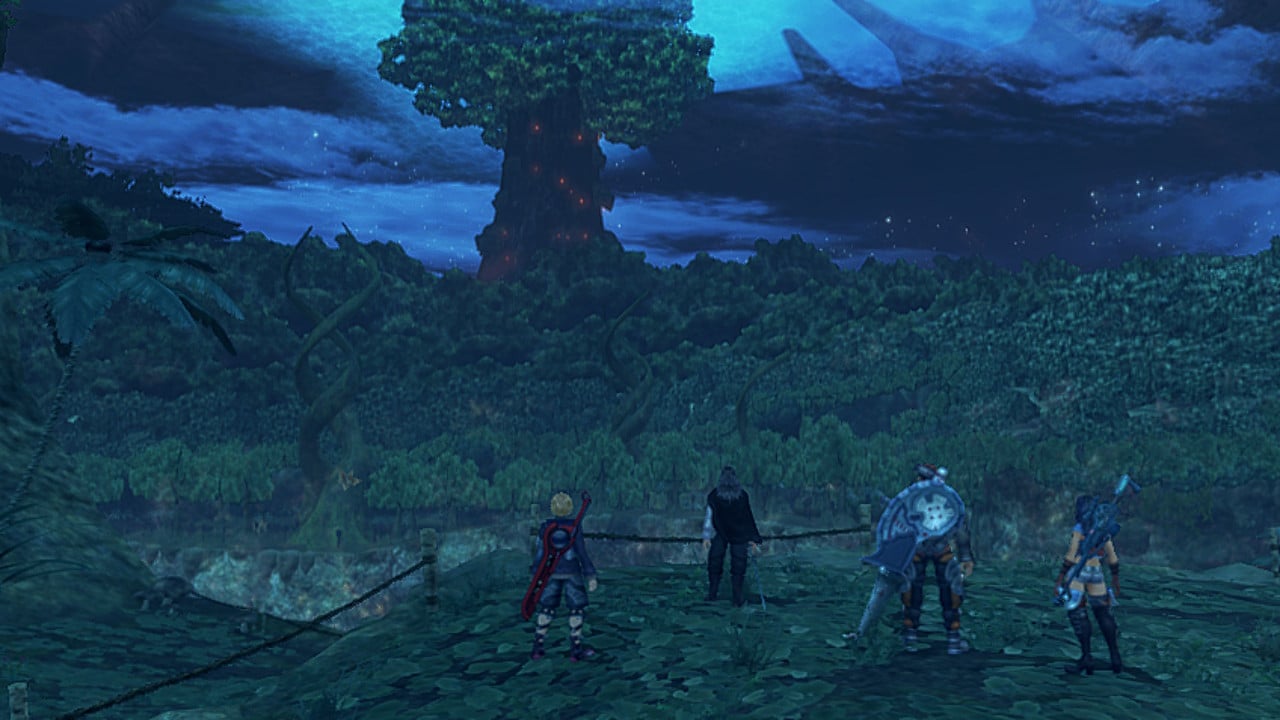 When it comes to (good) remasters, the new visuals always seem like how the original version of a game looked in my mind. However, when doing a side-by-side comparison, the differences can be striking. For both remasters that I recently reviewed, Saints Row The Third and Xenoblade Chronicles, you just have to see any such comparison to attest to the effort made to revamp the game.

Indeed, Xenoblade Chronicles’ vast areas never looked better in crisp HD, and neither have the characters. Their models look different, with a more cel-shaded approach than the original but the backdrop, even with enhanced textures, often reiterates that this is still a remaster of a 10-year old game. Nevertheless, they are much more pleasing to the eye than the original version which I wouldn’t think of getting back to. Along with the graphics, the audio score has also been reworked and together, they make the game feel more contemporary. 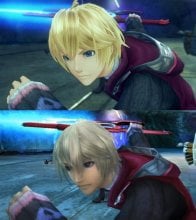 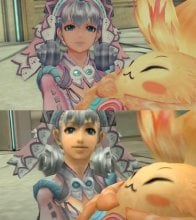 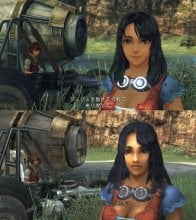 However, Xenoblade Chronicles: Definitive Edition’s HD visuals are best savored in docked mode rather than in handheld. The latter offers a stark contrast to the former. Textures look a little rough around the edges, with the character models and environment not as crisp and the visual enhancements are mostly apparent in cutscenes while in handheld. Additionally, regarding cutscenes, the issue of mismatch between the dubbing and lip sync did bug me throughout the game. Though, even with the visual downgrade, the game plays fluidly when going portable and is somewhat redeeming.

Despite the visual hiccup in handheld mode, the lingering absurd amount of inconsequential side quests and the occasional grind, Xenoblade Chronicles: Definitive Edition remains an enjoyable experience thanks to its satisfying combat, intriguing plot and improved UI that makes for a more approachable and fluid experience. If you haven’t joined Shulk and his friends’ adventure across the Bionis and Mechonis, now is the time to pick up the Monado and sink in endless hours. If you did play it before and wish to relive it, this is, hands down, the version to get.