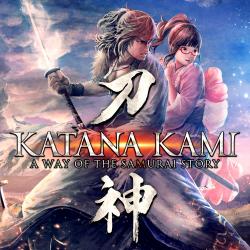 Now I'm not acquainted with the Way of the Samurai series⁠—I may even go as far as saying it's not a series I'd heard of before playing this game. What drew me in wasn't the brand, though I'm sure it might for existing fans, it really came down to two factors: random dungeons and fun sword-oriented combat. These are two of my favourite things in any kind of game, and to see them melded together is always a joy. 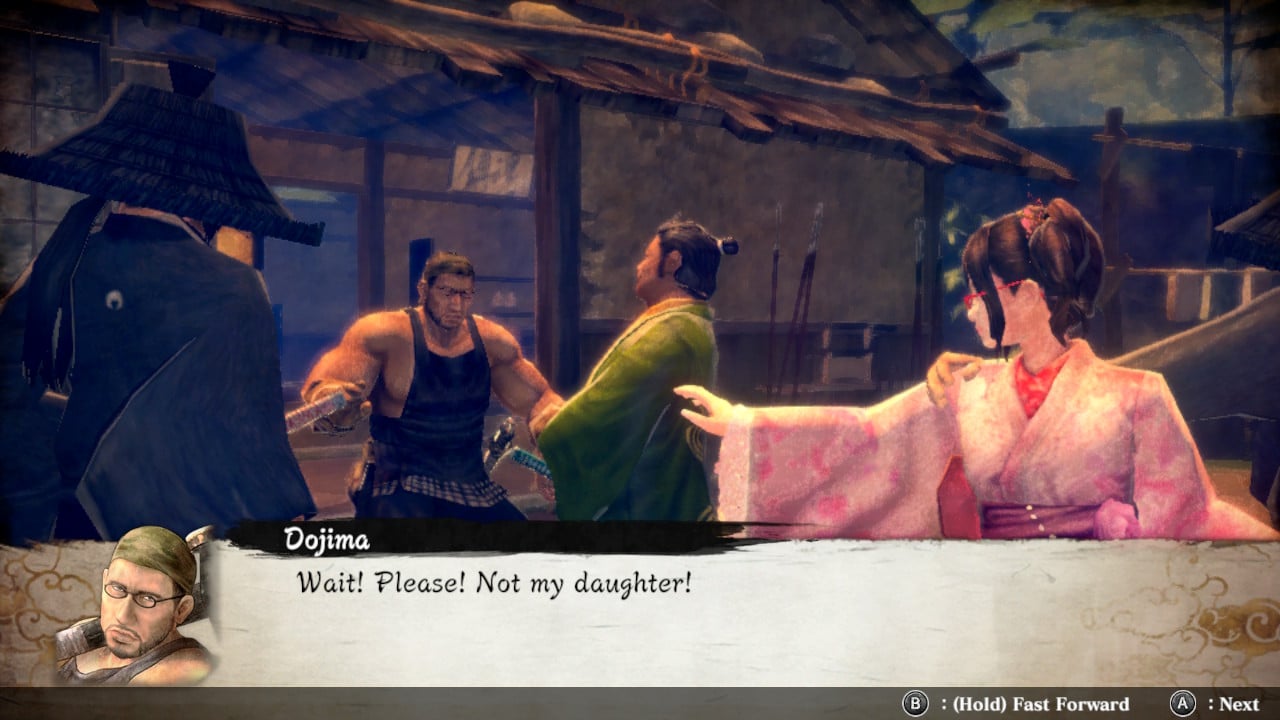 The game opens with you arriving at a small mountain pass. There's not much here. You have a blacksmith, a tree, and three paths leading to different territories. As you walk closer to the blacksmith, you see an altercation: Dojima the blacksmith owes money, and it's a not-insignificant amount. To that end, his daughter is taken as collateral, and as an upstanding citizen it's up to you to see her returned safely home. It's here the gameplay loop begins.

It's simple, but fun all the same. To pay off the debt, you have several aspects to manage: the blacksmith itself, the balance of power and tension of the three neighbouring clans, and the mysterious dungeon that only appears at night. You explore the dungeon by night, completing quests, collecting bounties, and gathering items. Then, when you're done, you make use of the newly acquired resources in the day around the blacksmith. Through Dojima's smithery, you can upgrade your gear, making it easier to venture further into the dungeon, but really this is secondary to the fun you can have messing with the three clans.

You see, each new day brings new orders for swords. When you start, none of the clans are particularly fond of Dojima's smithing skills, but accept he's really their only choice. The small Post Town generally requests one or two swords each order, but the other two clans can go as high as 25; of course, you can always send more swords, or kit out the clan you dislike with fakes. It feels like a bizarre addition to a game like this, but it's one I find remarkably amusing. Nothing is without risk, naturally. Each of the clans happens to run a small market stall outside the blacksmith, and if you get on the wrong side of them, they'll stop selling to you entirely. You lose out on items, upgrades, and much more if you're not careful. To mend broken bonds with the clans, you can always send them a ham if you happen across one in the dungeon, but most of the time I just wrote them off as collateral damage and kept the hams for myself. 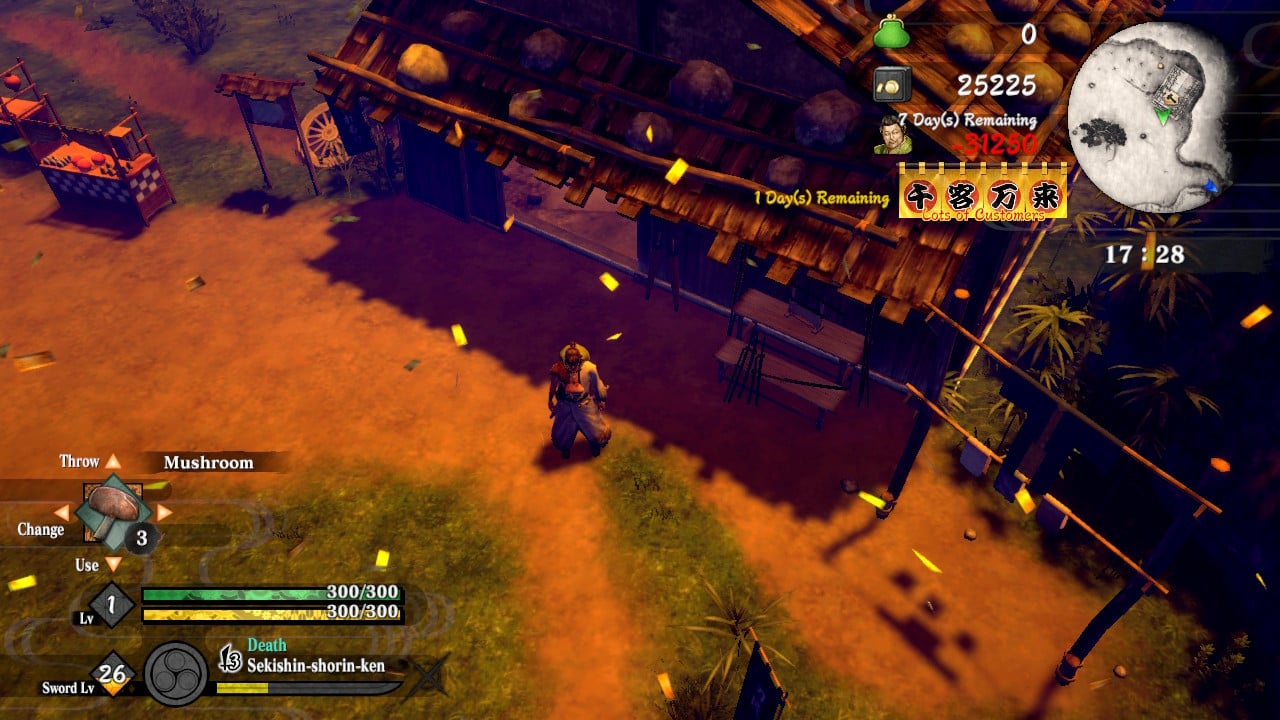 If you play things just right, you'll get a lot of customers coming in for a few days.

There's a certain intricacy to be seen in how you best utilise the three clans. You want them to hate each other, but not you. You want to incite war, but without necessarily shutting out any one group⁠—war sells swords after all. Maintaining this balance is ultimately an optional challenge, but it's an incredibly satisfying one all the same.

With the day over, the second part of the game gets its limelight: mysterious dungeoneering. Well I say mysterious dungeoneering, but this isn't a Mystery Dungeon game, instead a more action-oriented isometric dungeon crawler. You go from floor to randomly generated floor, defeating enemies, and picking up weapons and items. At set floors, you'll have boss battles and challenge rooms you're required to beat before allowing you to progress, but also allowing you a way out of the dungeon without having to reach the end. Through these, you can get a sense of steady progress while your weapons are still weak and you're still getting used to the way the game plays. 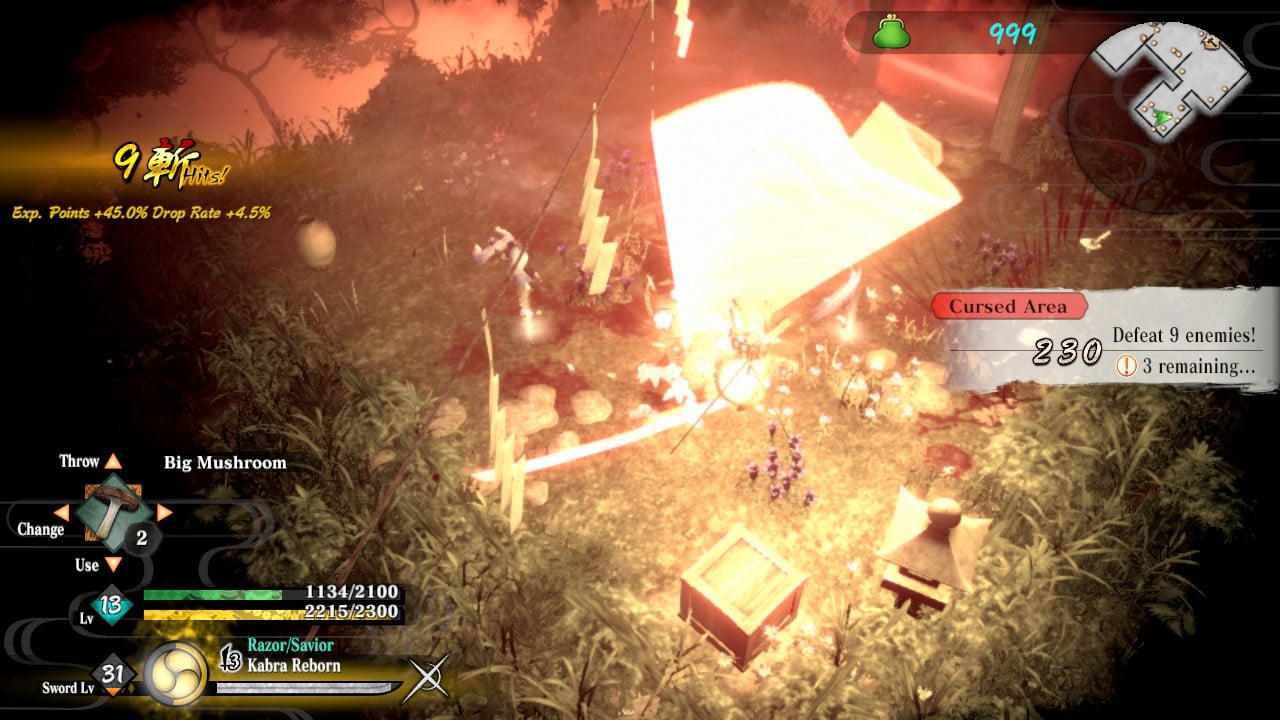 This is a game that flourishes in motion, but you can get a glimpse of it here.

Combat itself is frankly a joy. On paper you have a strong attack and a weak attack, but as you progress and continue to use your weapon of choice, you naturally unlock new combos. Your experience is constantly warping and changing, and yet can stay the same if all you want is a bit of mindless button mashing. It's not dissimilar to Dynasty Warriors in that respect, but perhaps has more depth in what is possible should you want it. To diversify things further, each weapon type comes with its own unique blend of Katana Time: a powered up state you charge as you attack enemies. In this state, you'll do incredible damage in a variety of different ways. Some swords will grow extremely long to hit more enemies at once, others will end their combo with an explosion; with nine styles to play with you'll find one to suit how you enjoy playing. When it comes to picking a favourite part of the combat system, it'd definitely be the counters. Usable by either a well-timed dodge, comparable to how the Adept Style of Monster Hunter Generations works, or by a well-timed guard, these counters give you a brilliantly satisfying reason to learn enemy attack patterns. They're flashy, bold, and most importantly work in the game's online PvP.

Encountering other players in the dungeon is a mixed experience, but generally one that ends in a duel. As you explore and venture to a new floor, another player has a chance of appearing. Through simple button presses, you can decide whether you want to be cooperative and clear the floor together, or the opposite, and fight to the death. Interestingly, this isn't a decision you have to set in stone. You can approach a player with the white flag held high, before swiftly stabbing them in the back. It's incredibly human in its implementation, and really pushes you to either stick with or abandon an honour system. Thankfully, if a player does defeat you, you're only thrown back to the start of the floor minus some money, in oppose to being thrown from the dungeon with nothing as you'd expect in a game like this. It's worth saying you can play with friends, but I didn't get to try this as nobody I knew decided to grab the game. 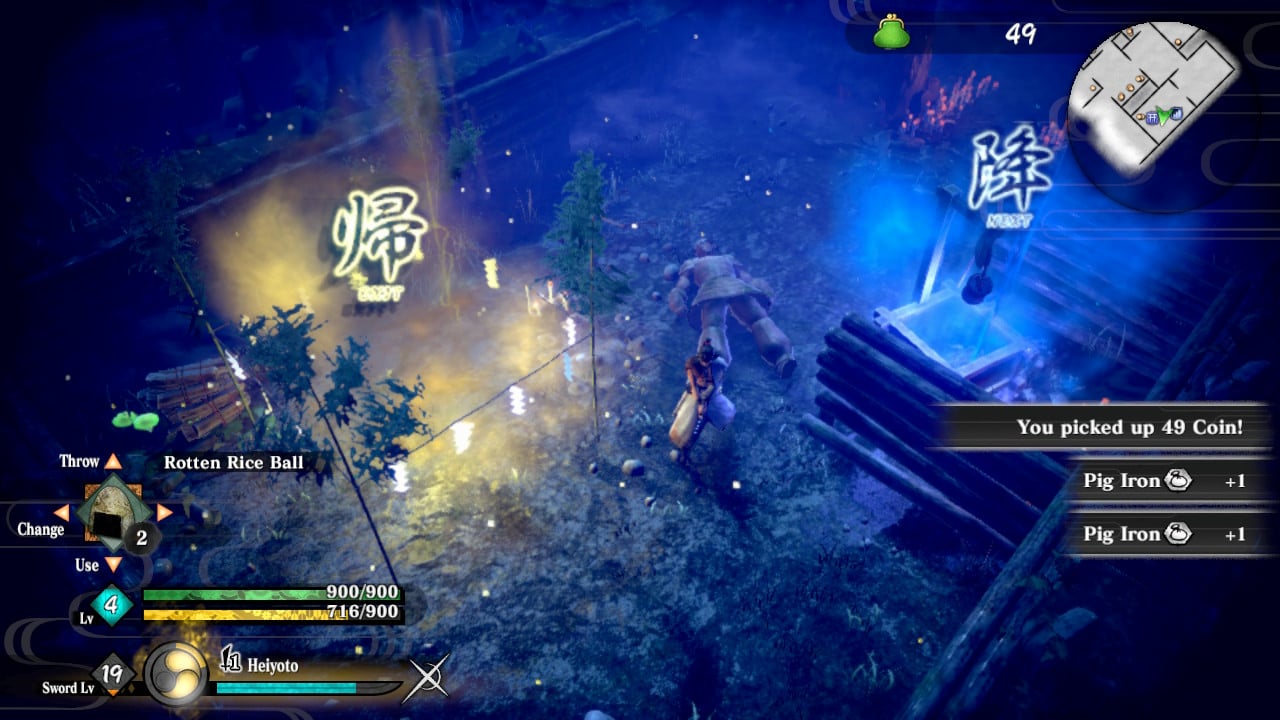 The choice is yours as you explore deeper.

The dungeon itself is a bit of a mixed bag for me. While I enjoy the randomness it offers to keep the experience fresh each run through, I feel it doesn't necessarily do enough to hook me from start to end. With only 20 floors, and set bosses locked to the halfway point and the end, it manages to feel repetitive while in actuality being different each time. This sameness does get broken up from time to time; you get portals to skip floors, mystery floors that can either reward you with treasure or give you a challenge battle, and danger floors, which are a few floors significantly harder than what the game otherwise offers. They're all fun for the first five, maybe the first ten times you play them, but the more you play the more you grow accustom to it. As you're paying Dojima's debt, your mindset shifts from wanting to explore the dungeon, to questioning whether you really need to in order to hit the next payment deadline. The gameplay remains fun, but there just needed to be more. More bosses in the mix, more enemies to encounter, variations, deviants, something to surprise you each time you go back to it. You get something like this at the end of the game, but you have to question whether weaving it into the standard gameplay loop would've been better than an almost-tacked on postgame. 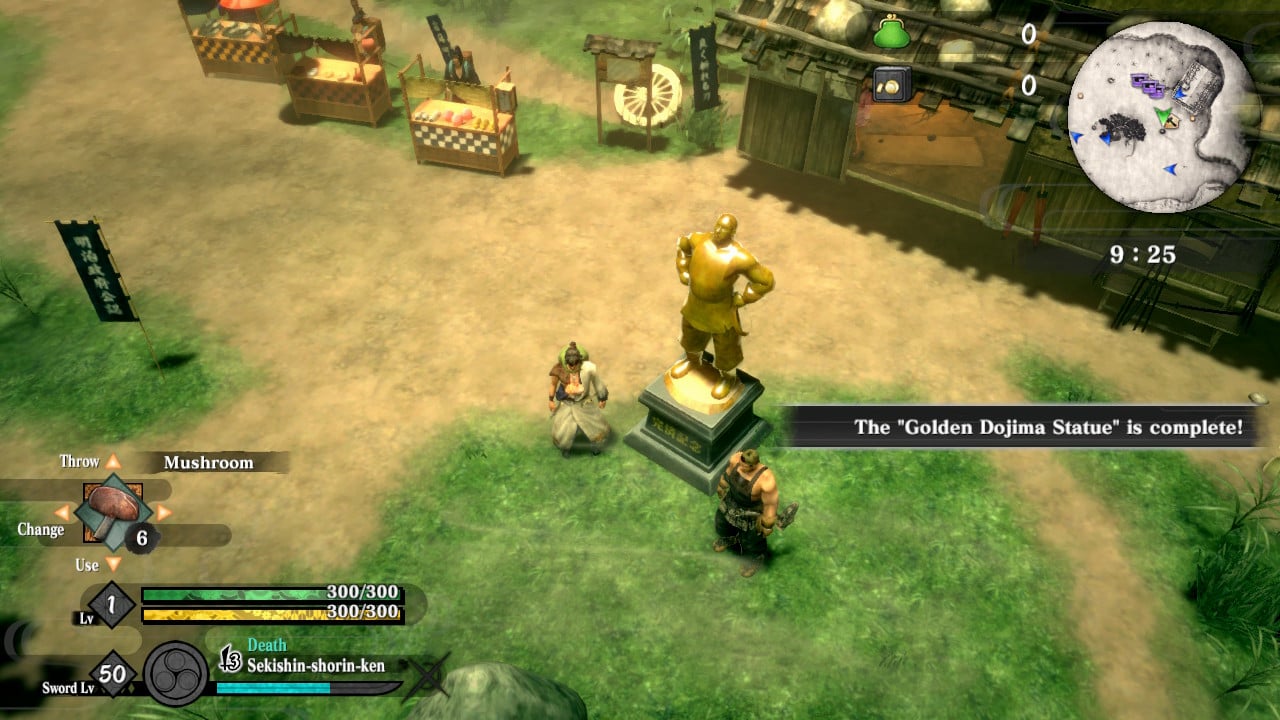 Ah yes, we learned our lesson after the first debt... Wait how much did that cost!?

As things stand, Katana Kami is the best game I've played this year. It being the rear end of February, that might not mean much to some, but I enjoyed my time with it more than I ever could have anticipated. Through its interesting combat, great variety of weapons and styles to experience, the combos, the counters, and even the online PvP, I enjoyed my time and was left wanting more. It's more than worth the price of admission, and I find myself able to recommend it to any lovers of fun swordplay, dungeon crawling, or the vibe of a Mystery Dungeon game in a different form. It's a blast.