A Round of Applause for the Patronage

The flash cart covered in this review has been supplied by Retrogate, the official distributor of the Everdrive line of products and was sponsored by Krikzz himself. Visit www.krikzz.com and www.retrogate.com for your retro console’s flash cart needs! 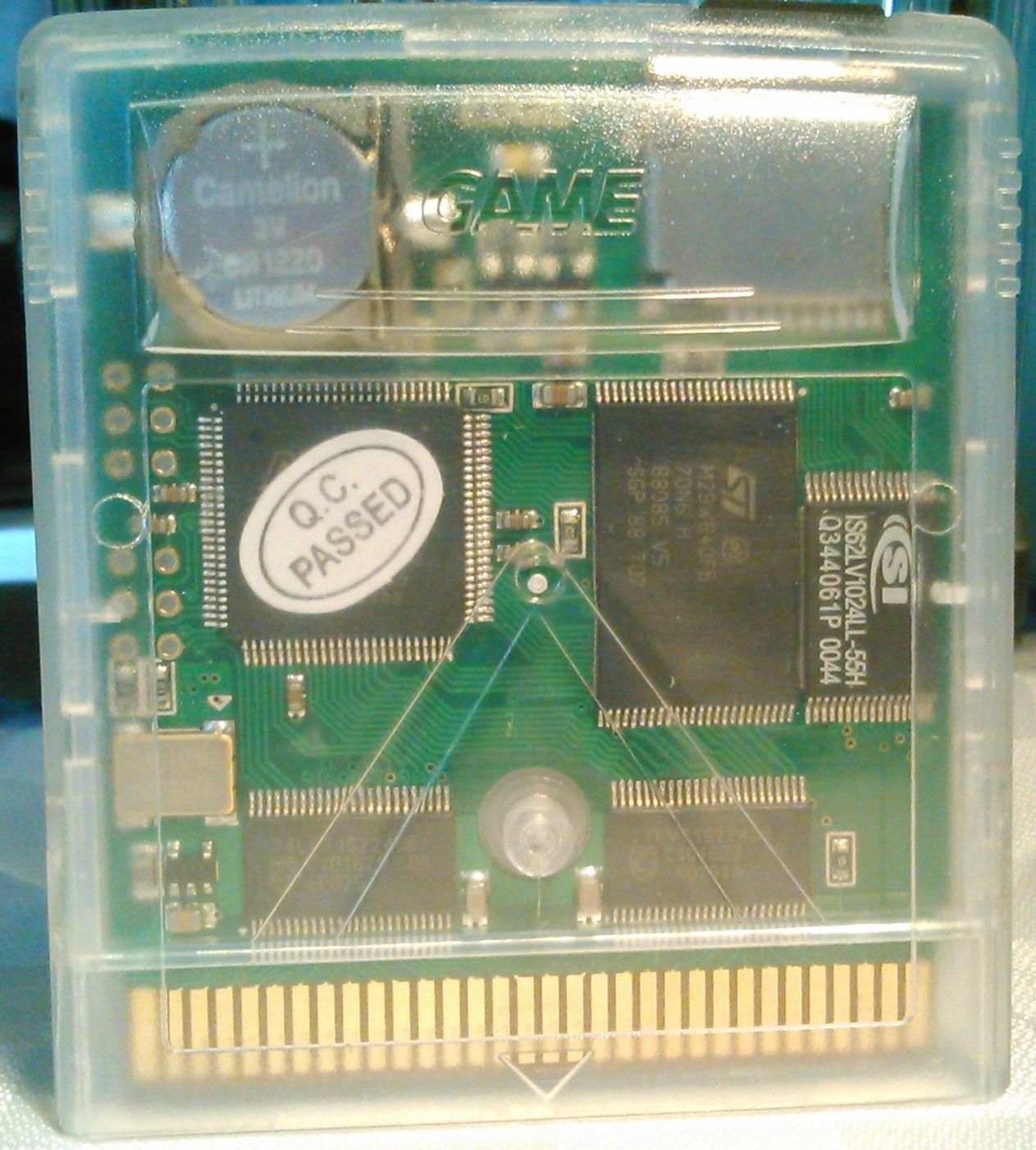 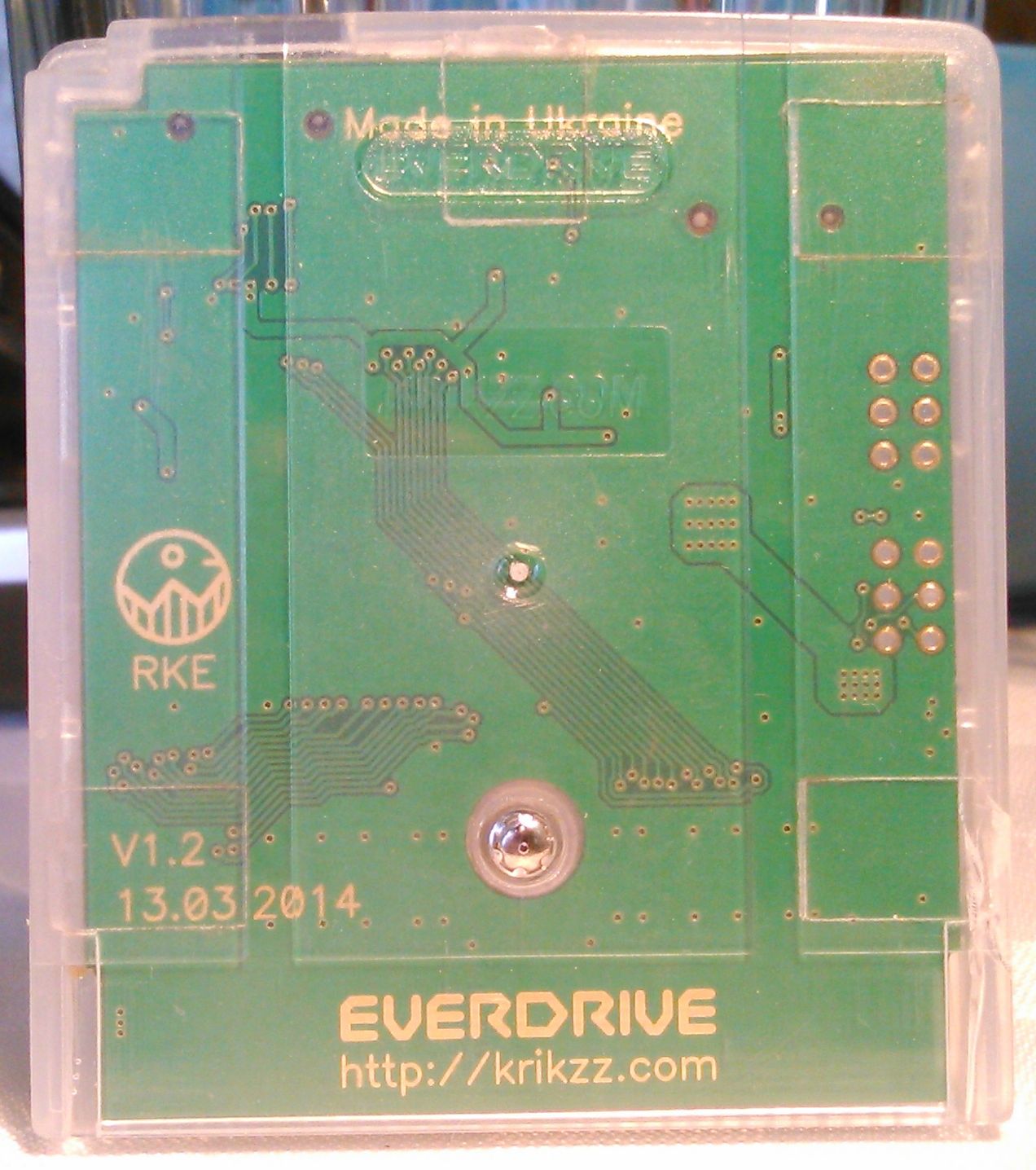 Front and back of the device

The Game Boy Advance and DS eras spoiled us with a huge variety of flash carts of all-sorts, we got terribly comfortable with a constant supply of increasingly advanced flash kits – this is not the case when it comes to some retro consoles. Often times products for systems like the Nintendo 64 or the Game Boy are either discontinued and rare or terribly outdated and troublesome to use in comparison to the devices we enjoy today. This is where people like Krikzz step in and put a new breath of life into our retro devices by providing SD support, high compatibility rates and MultiROM/MultiSave support, among other awesome features we could only dream of back in the day. The latest product in Krikzz’s Everdrive line, the Everdrive GB, is specifically exciting simply because of the massive popularity of the Game Boy line and the scarcity of modern flash solutions. 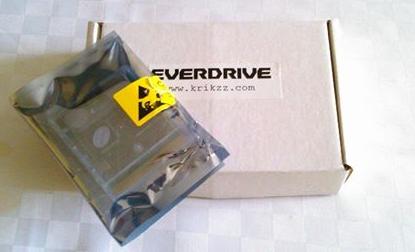 The Everdrive GB came packaged in a simplistic white cardboard box with the Everdrive logo stuck on top of it – no awkward blister, getting to the meat of the sandwich was as easy as it gets. The box itself is a bit too minimalist for its own good, but on the bright side it’s much safer than your usual flash cart package. A lot of care went into protecting the device during shipping – the box was inside a bubble wrap envelope while the cart itself came in an anti-static bag which was also wrapped in additional bubble wrap. The package would easily survive a small tactical nuclear strike, so the supplier deserves props for that.

As far as the cart itself is concerned, the casing is made of translucent plastic which shows all the electronic wonders inside – great, because they’re a view to behold. Everything on the PCB is laid out nicely and soldered neatly, it’s definitely a high-quality product that isn’t going to break on you.

The casing feels relatively sturdy and much better than most flash carts, unfortunately the cart I received had a crack on its back which saddened me greatly. I doubt that the cartridge got damaged during shipping because the box itself was intact, but I can’t fault Retrogate for it – the carts were all sold out the moment I requested one so I assume that the sample I got was found in a dark corner of the warehouse.

The cartridge does not have any distinguishable stickers and follows a minimalist style. Instead of stickers, the Everdrive logo and Krikzz’s website address is embossed in the plastic itself in an effort to expose as much circuitry as possible.

The spring-loaded SD slot is solid and can be found in the top right-hand corner of the cart. There’s also a red status LED in the top center – it blinks whenever you erase or write to the cartridge’s flash memory.

The cartridge is held together with an original Nintendo-style screw – on one hand it gives it a genuine feel, on the other it makes replacing the battery a chore if you lack the appropriate tools to open Nintendo cartridges – a more standardized screw would’ve been more welcome. 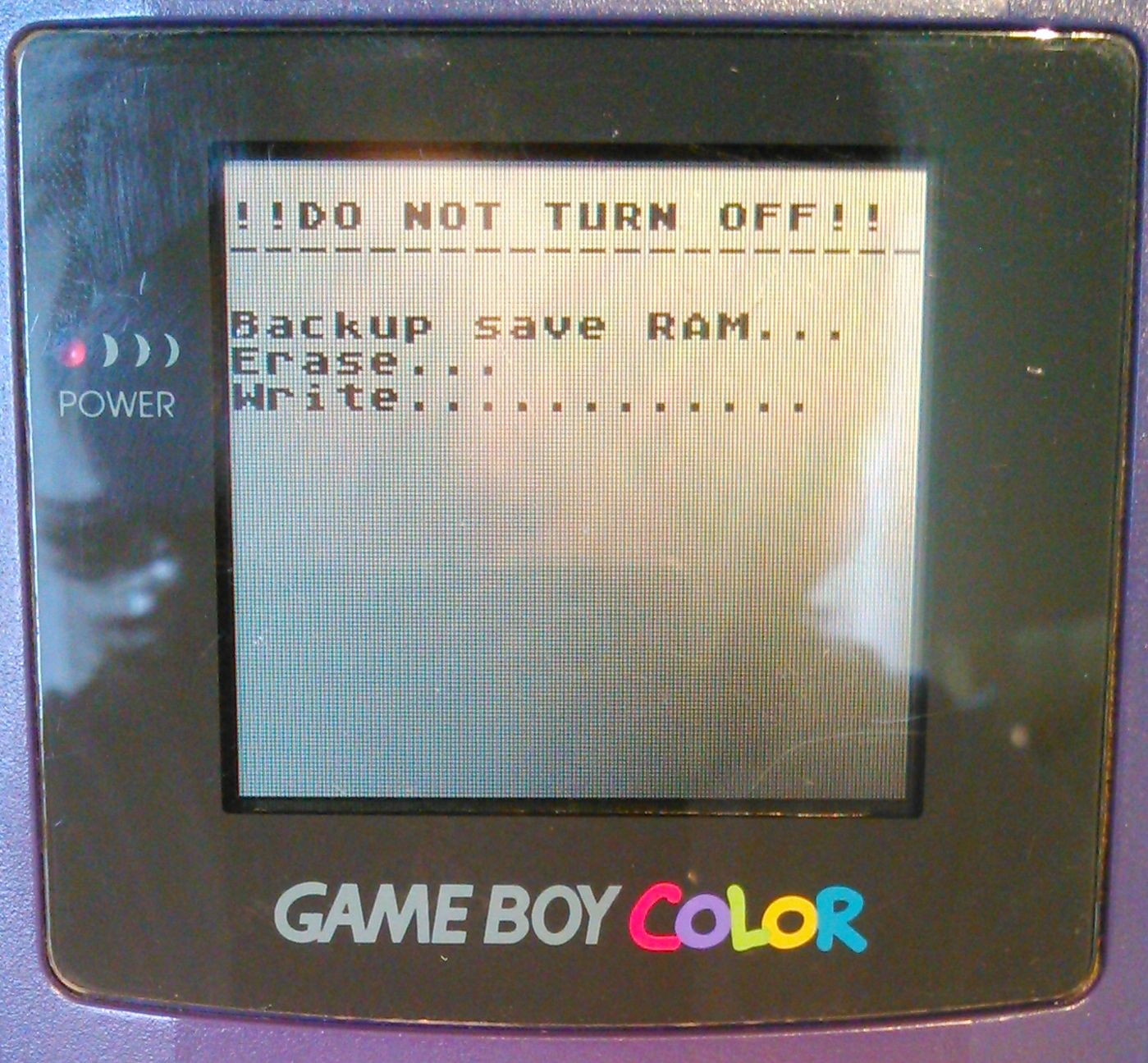 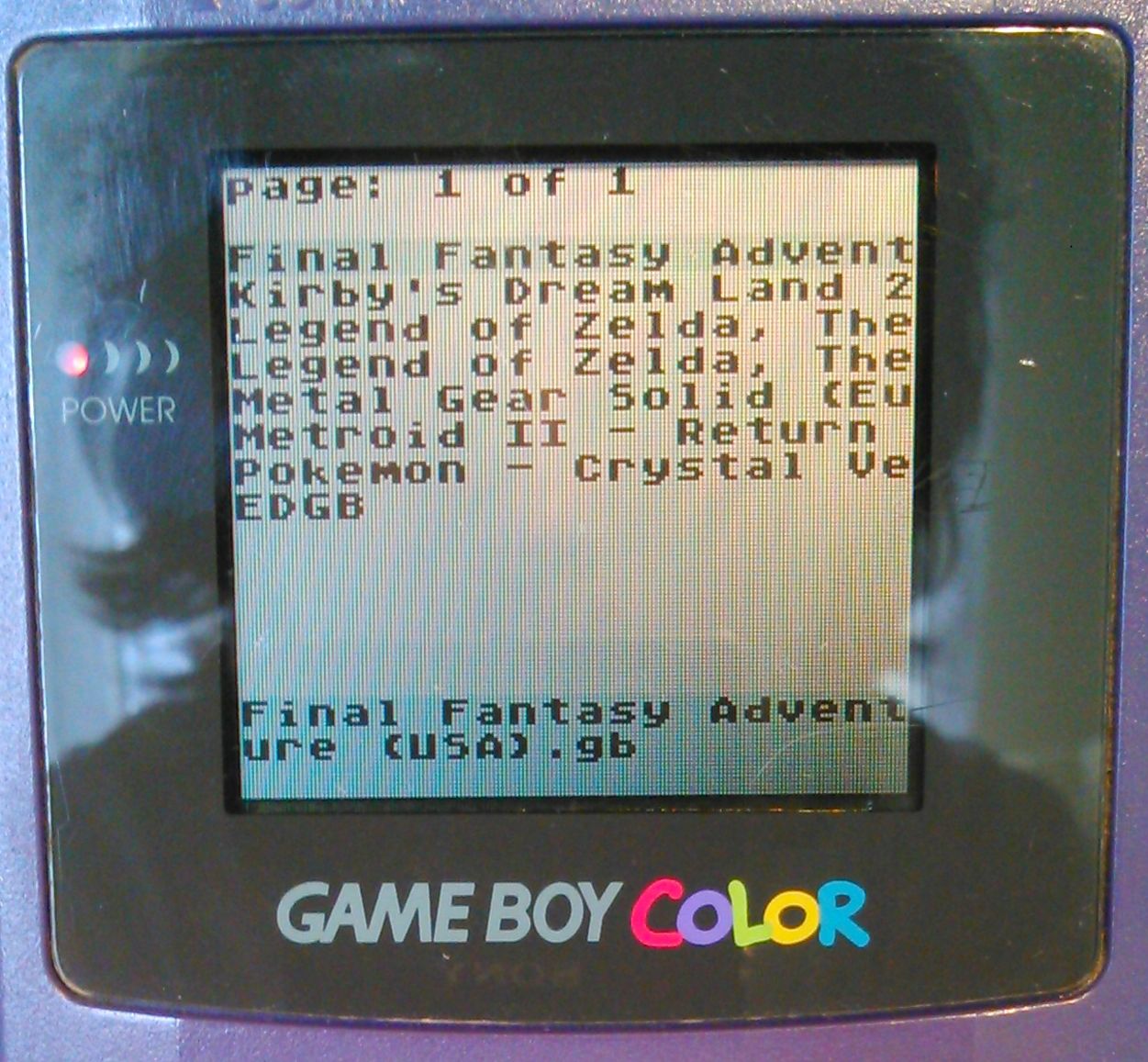 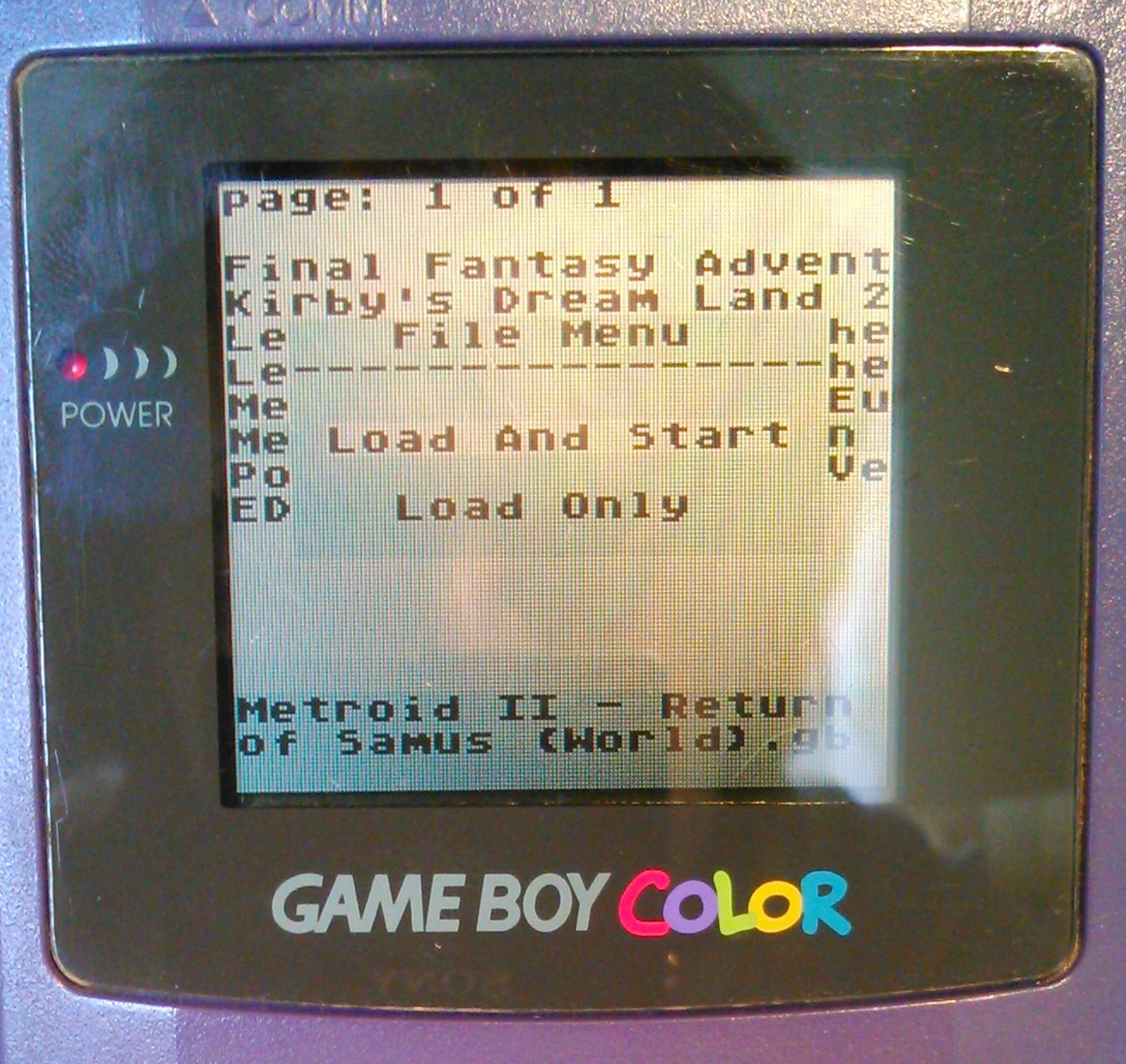 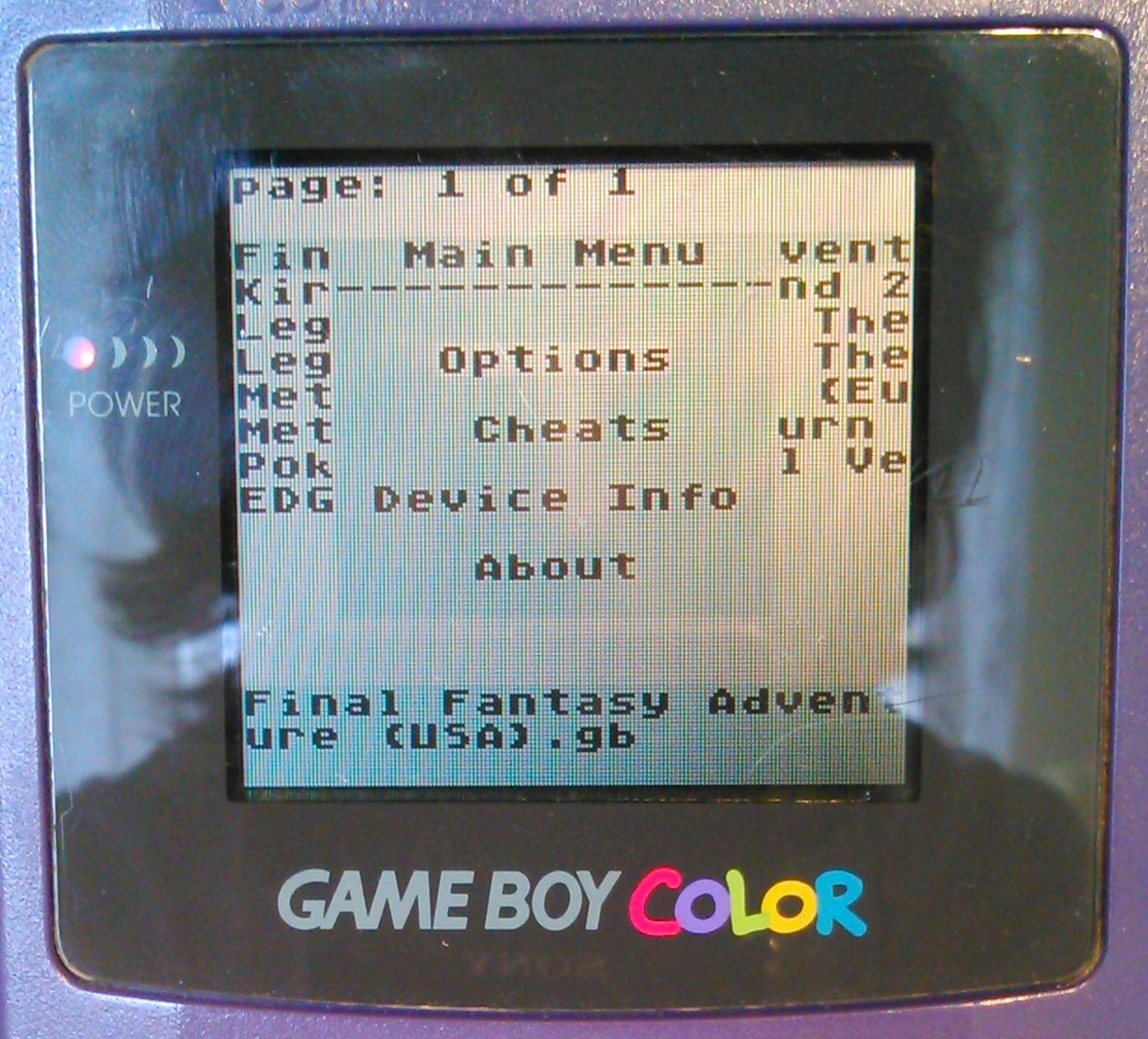 Various sections of the Main Menu (ROM Browser, File Menu, Main Menu). On the screen you can see the EDGB folder - that's where all the dumped save files are stored

The greatest feature of the Everdrive GB is MultiROM/MultiSave thanks to SD card support. Whenever you wish to switch games, all you have to do is use the simplistic but all-encompassing menu to flash a new game and its save file onto the cartridge’s built-in memory – the process is quick and painless (length of flashing depends on the size of the game) and whenever the game is in memory, you can start it at any time using the Start button without having to flash it again until it is erased and overwritten with another game. The flash cart supports up to 1024 files per directory, but fear not! It also supports folders, so you can easily multiply that number by dividing your collection into categories. In case you will need to restart a given game quickly the cartridge also supports a Soft Reset combination - A+B+Start+Select - this comes in handy whenever you reach "rinse and repeat" sections in games. 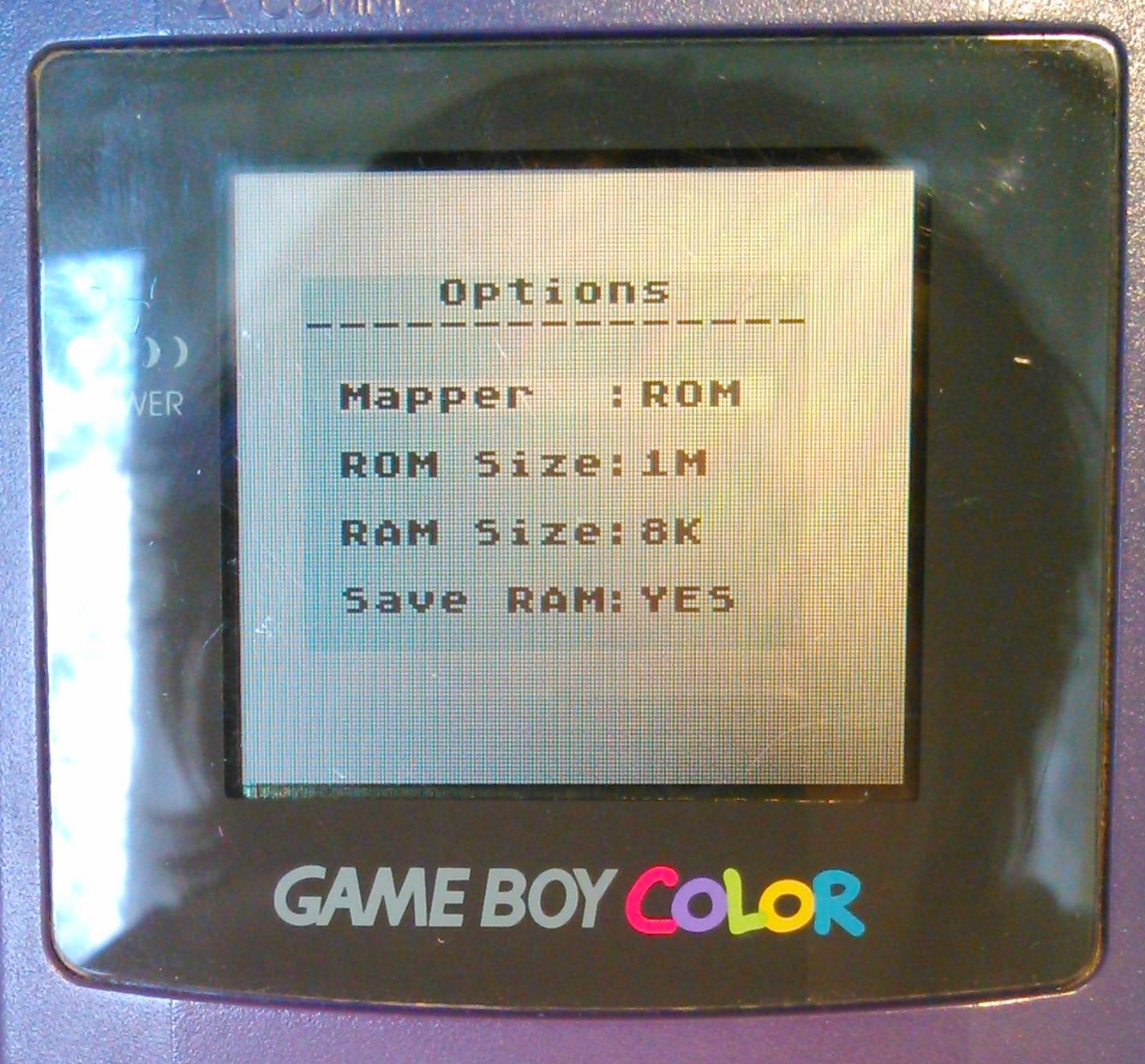 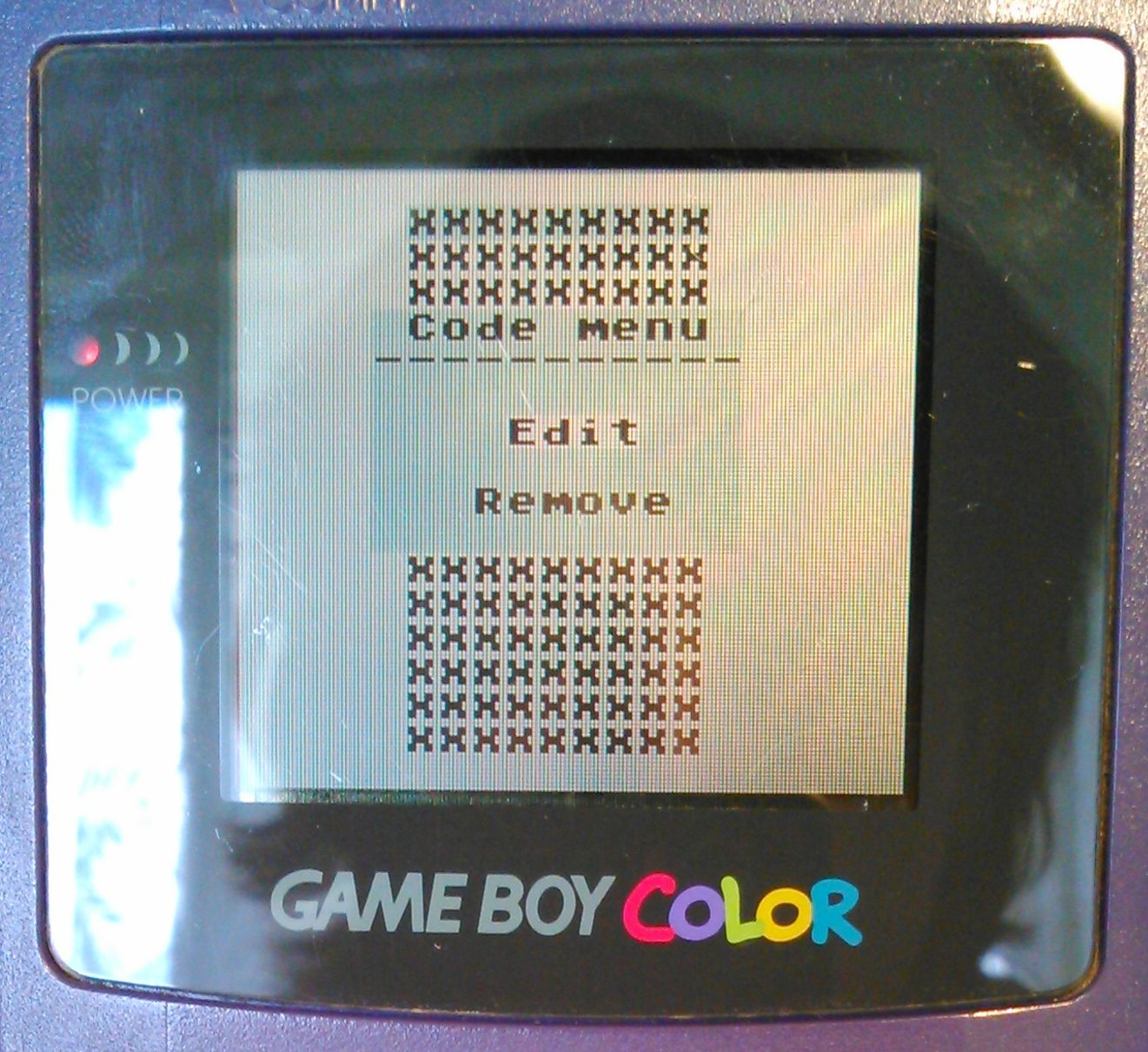 The cartridge is compatible with ROM ONLY, MBC1, MBC2, MBC3 and MBC5 games with ROM sizes up to 8Mbytes.  It works with both Game Boy and Game Boy Color games, it also supports additional features available only on certain systems such as The Legend of Zelda: Oracle of Seasons/Ages Advance Store on the Game Boy Advance or screen borders on the Super Game Boy. It covers almost the entire spectrum of Game Boy games, its only shortcomings are the lack of an RTC clock, however this problem can be resolved using patches or Game Genie codes which the cartridge does support natively, as well as the lack of HuC-1, HuC-3 and "Chinese Originals" mappers support, but those are obscure and it is unlikely that you will ever run into a game using them unless you deliberately search for one. 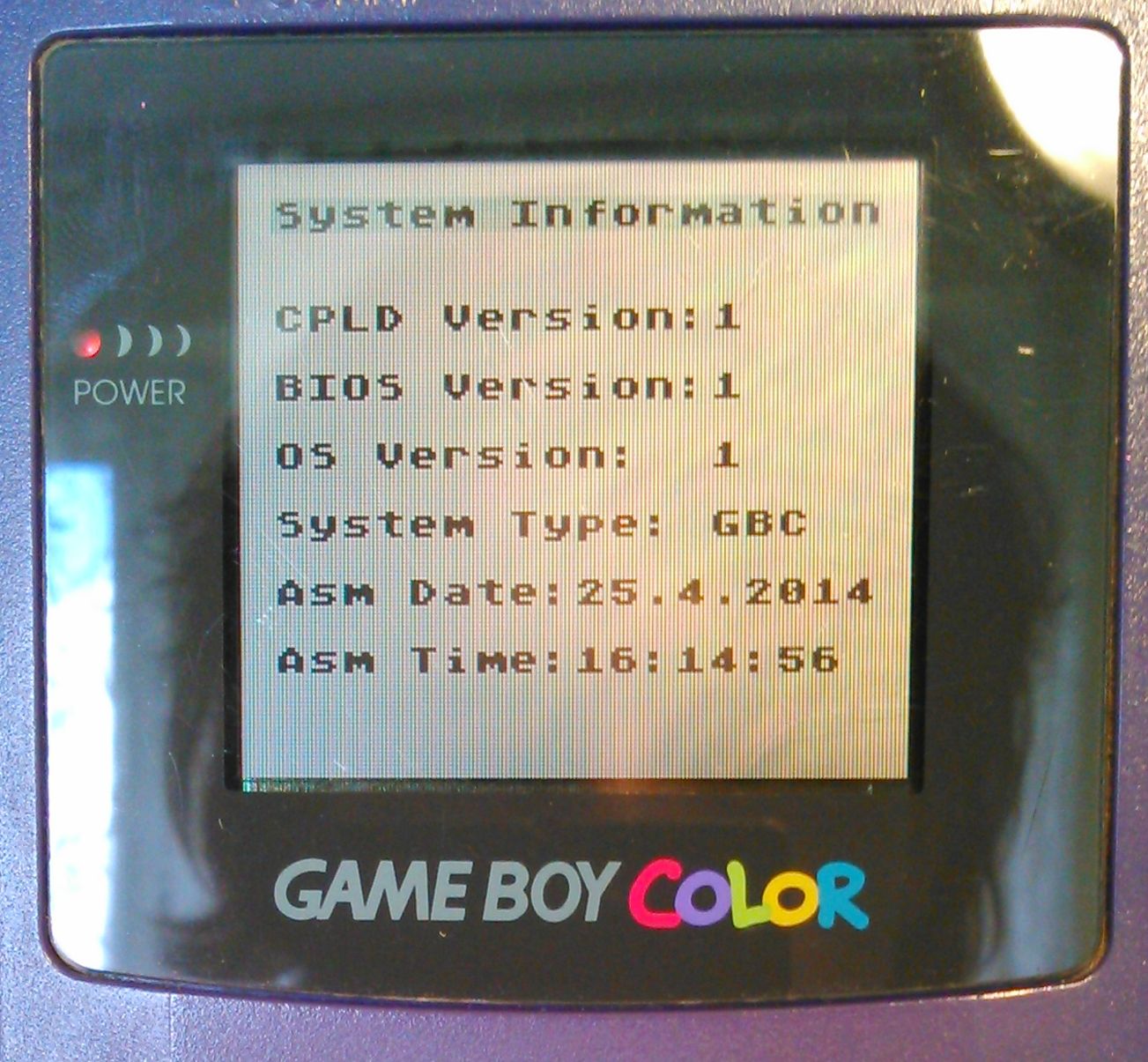 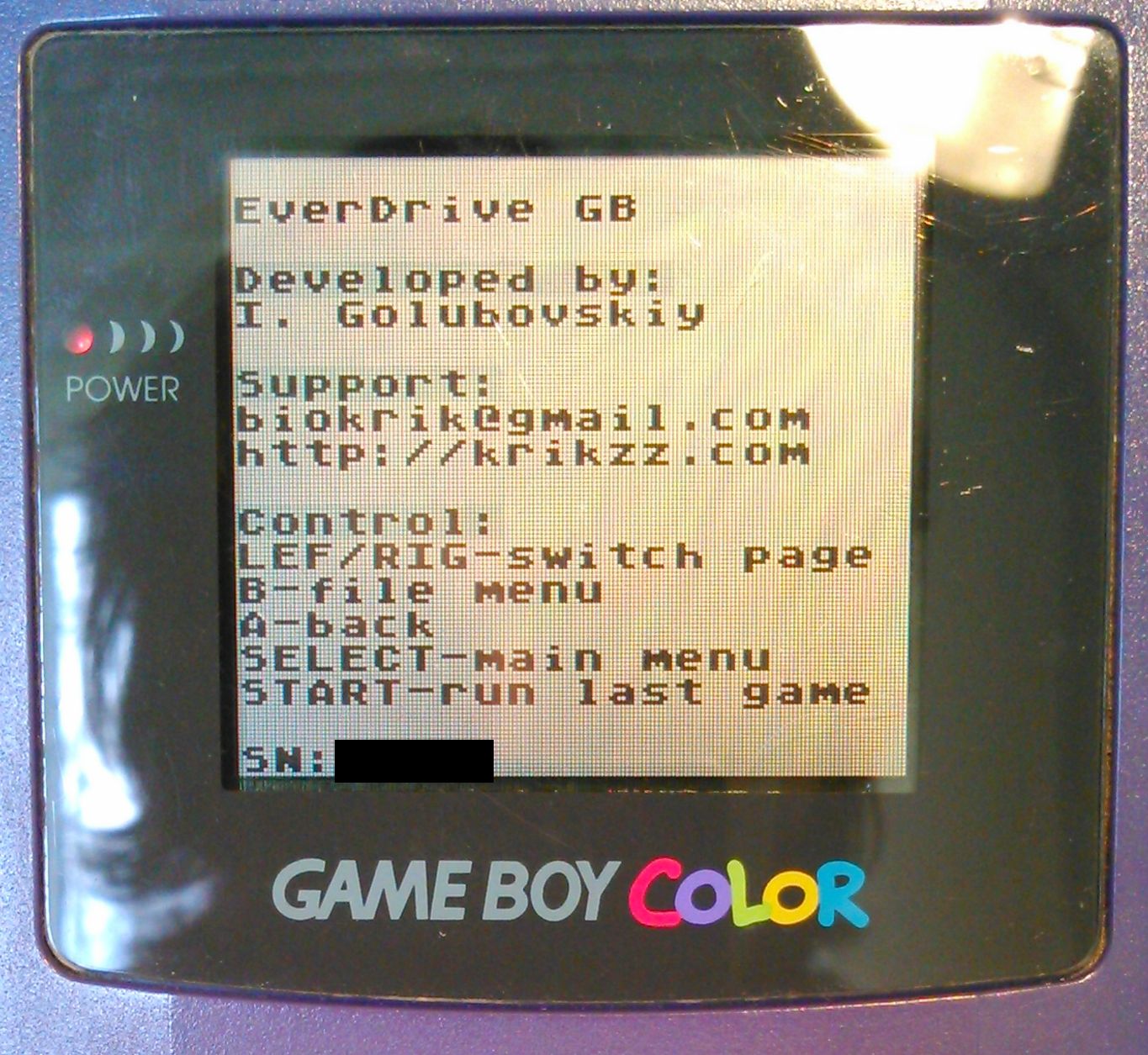 The results of compatibility tests are more than promising - after testing 50 titles, both commercial and homebrew ones, the cartridge only ran into issues with three titles - Pokemon Crystal and Harvest Moon GB which obviously require an RTC clock to properly function and R-Type DX which ran normally after a Soft Reset. As far as homebrew is concerned, unless the application specifically stated that it was meant to be ran on emulators only and would not work on real hardware, everything worked perfectly fine. The detailed results of what games and applications were tested can be found below.

The Everdrive GB is a quality product for demanding customers. Its built-in features are miles ahead of what's offered by other contemporarily available solutions and SD support allows you to carry your entire Game Boy and Game Boy Color collection on just one cartridge instead of the usual 1-5 ROM's. The product is easy to use, requires no additional drivers or converters, it's entirely plug and play - input SD card, output fun. It's essentially the Game Boy flash cart of the modern age and it's products like this that keep the scene going. There isn't much more to add - the Everdrive GB deserves a glowing recommendation and two thumbs up, the only negative I can really think of is the price of the kit which is $88, but honestly, you're paying for quality here. If you want to bust out your old Game Boy instead of using emulators but don't feel like carrying around numerous cartridges or you don't feel like arm wrestling with drivers to get your ancient flash cart to work, the Everdrive GB is the way to go. 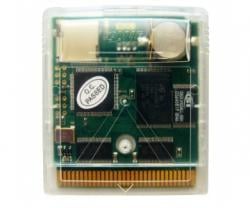